Please ensure Javascript is enabled for purposes of website accessibility
Log In Help Join The Motley Fool
Free Article Join Over 1 Million Premium Members And Get More In-Depth Stock Guidance and Research
By Daniel B. Kline - Updated Jul 21, 2017 at 2:22PM

Researchers say retailers have it wrong.

Retailers remain heavily concerned that the low prices offered by Wal-Mart as well as Amazon (NASDAQ: AMZN) and other digital retailers hurt their business, according to a new research report. The study, conducted by Retail Systems Research, surveyed 1,266 retailers worldwide, with 87% of them headquartered in the United States. Respondents were asked to name up to three challenges their companies faced, and 55% cited "consumer price sensitivity," making it the most commonly mentioned problem.

That was a 5% increase for price sensitivity over last year's survey. The researchers who wrote the report, Paula Rosenblum and Steve Rowen, called it "shocking" that retailers considered price their biggest problem when consumer data shows they should be most worried about in-store service, competitive differentiation, and customer dissatisfaction. 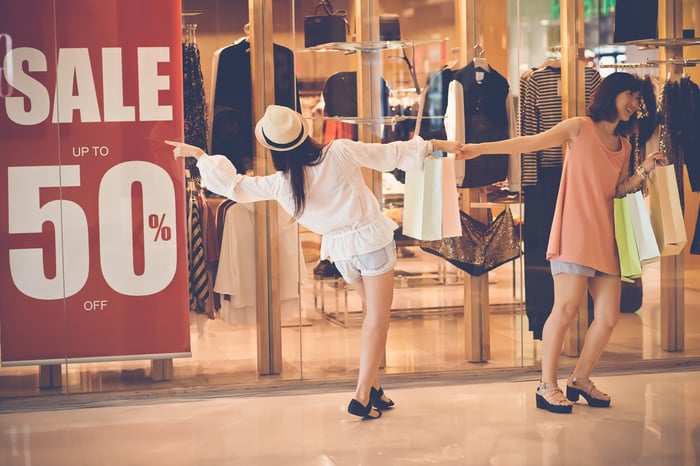 What do shoppers want?

The researchers found that the retailers consider their biggest business challenges to be:

"It seems as though time is standing still," wrote Rosenblum and Rowen. "It's simply shocking that fewer respondents don't recognize far bigger problems."

The researchers named what they consider the actual problems:

"It instantly becomes clear there is a fundamental break between what retailers are focused on -- and what consumers care about most," wrote Rosenblum and Rowen.

It's about more than price

While the RSR researchers think that retailers worry too much about price, they are not saying that stores can charge whatever they want. Their focus is instead on the the fact brick-and-mortar chains have lost sight of the fact that consumers want a better in-store experience.

"It's hard to overstate the importance of serious and significant change to the store itself," wrote Rosenblum and Rowen. "Price is simply not an adequate lever to drive demand, especially when retailers like Amazon.com seem able to withstand year after year of minimal retail profits. It doesn't take much to make a shopper say 'Eh, I'll just buy it from Amazon.'"

The RSR study also found that "retail winners," which it defined as having sales growth above the industry average of 4.5%, had some key differences from less successful chains. Rosenblum and Rowen learned that winners put more focus on "catering to their best customers and becoming part of the fabric of their communities."

In the case of community events, 32% of winners host them compared to 27% of the other respondents. When it comes to taking care of top customers, the difference was more profound with 32% of winners offering VIP-specific promotions while only 16% of the laggards did the same.

When retailers make price their key concern, consumers cherry-pick the best deals, according to the RSR study. That may lead to increased sales, but it drives margins down. That makes less money available to revamp stores to give consumers the convenient, differentiated shopping experience they are demanding.

In many ways, what Rosenblum and Rowen have found mirrors some of the blueprint Best Buy (BBY 5.64%) followed for its turnaround. The company did address price in the sense that it acknowledged that on small items like cables it could not charge double, triple, or even more than what Amazon charged. On bigger items, the company offered price matching, but its key changes were in changing its store experience.

Best Buy rebuilt its brand around offering better service and an easier shopping experience featuring improved store layouts. That included adding expertise that was easy for consumers to access via its multiple store-within-a-store offerings as well as focusing on its My Best Buy rewards program. The company also made its stores destinations by adding more demos, hosting events, and basically giving consumers a reason to leave the house.

Amazon has both price and convenience. Physical retailers have immediacy and the ability to offer in-person service in a way that a digital retailer can't. It's clear from the RSR research that brick-and-mortar chains need to stop chasing online retailers on price and instead focus on experience, overall value, and delivering amazing service.