The first is the most important, and I truly hope the last never comes true.

A little over a decade ago, Peter Gassner was an executive at salesforce.com (CRM -0.57%). While he was out pushing the company's cloud services, he noticed something: The pharmaceutical industry had very specific needs that salesforce.com couldn't easily meet.

Taking that information, he left salesforce.com to found Veeva Systems (VEEV -1.99%), where he still functions as the company's CEO. He started his work with Veeva CRM, a customer relationship management tool for Big Pharma. Then he really hit it out of the park with Veeva Vault, a product that helps companies manage -- in the simplest sense -- all of the data that they need to track to obtain FDA approval for their drugs. 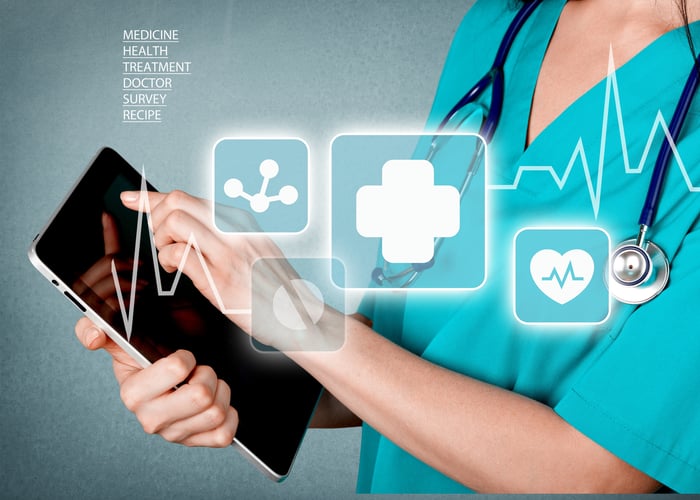 I first purchased shares of Veeva in January of 2014, have added to it since, and have no plans to sell. Here are 10 reasons why:

Not only would this be prohibitively expensive, it would also create massive headaches. Entire workforces would have to be retrained on a new system. And if any of this mission-critical data were lost, it would be a major liability. In the investing world, we call those high switching costs.

Of course, high switching costs mean absolutely nothing if you can't win over customers in the first place. Luckily for Veeva investors, however, momentum has been very strong.

Perhaps most importantly, the number of Vault customers using more than one Vault application grew 70% by the end of the first quarter of 2017.

Optionality is a complicated word for a simple concept: Make lots of small bets and look for just one or two to hit it big. After you see how a small bet performs, you have the option to either pursue it further or kill it.

For the first time, Veeva is really branching out on a small bet it recently made. Word of mouth about the ease and functionality of Veeva Vault has led companies outside of Big Pharma to start asking for a version that they can use. Specifically, this demand has come from industries that are heavily regulated: consumer packaged goods (CPG), chemicals, and manufacturing.

Starting this year, Vault QualityOne, a hybrid Vault product, is on the market for companies outside of life sciences to use. Already, a top-five CPG company has signed on.

4. Management has skin in the game

No one knows more about the hidden risks of a company than those that are managing it. That's why I think it's so important to invest in companies where management has their own skin in the game via stock ownership.

Peter Gassner owns almost 15 million Class B shares, while co-founder Gordon Ritter owns nearly 7 million. Combined, these two control just under 50% of all voting rights, and their stake is currently worth $1.4 billion.

That's what we have with Gassner: Most of his wealth is tied up in Veeva. But beyond that, founders often view their companies as extensions of themselves, and are committed to building lasting value.

While some think culture isn't important and impossible to measure, I'd point you toward Glassdoor.com. While the site isn't perfect -- and is certainly open to manipulation -- it offers an important data point for those wanting to learn about the morale of a company.

Currently, Veeva has pretty solid marks across the board. 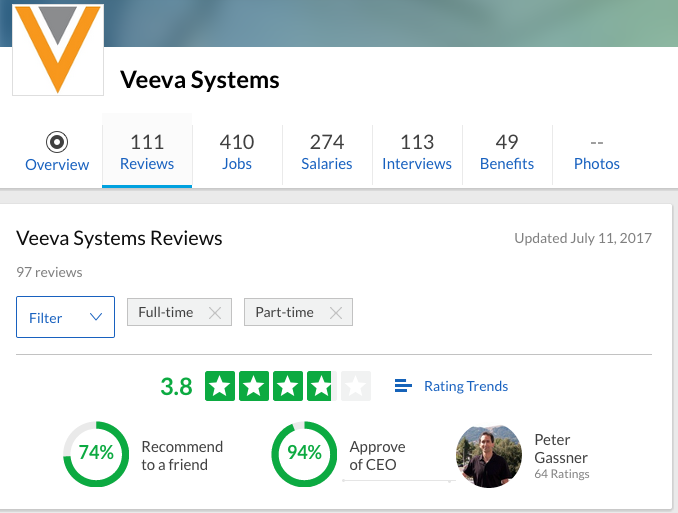 Every company, at one point or another, is going to go through difficult economic times. Those that have solid balance sheets and positive cash flows can often emerge from these times even stronger. That's because they can acquire weaker rivals, buy back shares on the cheap, or -- most importantly -- offer deals that the competition can't, and steal long-term market share.

Here's what the story looks like for Veeva right now.

Companies that have solid balance sheets like that are in great shape. But they sometimes hide a dangerous risk -- relying on just a few customers for a huge part of their revenue. When that's the case, all it takes is one decision coming from one person to sink a company overnight.

Luckily for Veeva, that's not the current situation. As the chart in the second point above shows, it has hundreds of different customers, and no single customer currently accounts for more than 10% of total revenues for the past three years.

9. Who knows what will be next?

Veeva's two newer products -- OpenData and Network -- probably won't hit the ball out of the park quite like Vault, but they don't have to. The company continues to innovate, and with each new customer, the moat surrounding Veeva widens.

Personally, I wouldn't be a very big fan of a takeover. I think Veeva has enormous potential moving forward -- with the move outside of Big Pharma being a cherry on top.

But the fact remains that Veeva clearly has a lot of momentum going for it. That's tempting to a lot of deep-pocketed competitors in the cloud space. While the stock certainly seems expensive right now, I wouldn't at all be surprised to see a cloud giant swoop in and pay around $10 billion for Veeva.

So there you have it, 10 reasons I own and plan to hold on to Veeva Systems stock -- and why you might want to consider the stock as well.