Qualcomm (NASDAQ:QCOM) is the leading vendor of smartphone applications processors and cellular modems, which are usually combined into a single chip. The company's dominant position in the smartphone chip market has afforded it substantial revenue growth and a solid amount of profit growth over the past several years.

As industrywide smartphone growth decelerates from the rapid pace seen in prior years, Qualcomm has been looking to expand its revenue sources to offset the declining growth rates in its core mobile processor business. 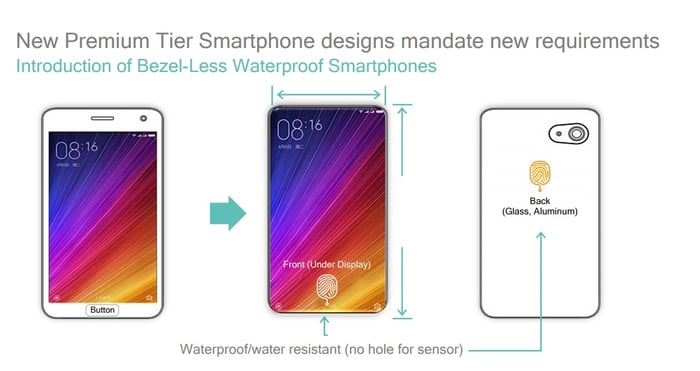 Qualcomm has spent a good deal of time and effort trying to expand its chip efforts into markets adjacent to its core smartphone market. The company's efforts in data centers, networking, Internet of Things, and more are certainly helping -- Qualcomm recently said that these areas saw cumulative year-over-year revenue growth of 25% in its most recent quarter.

Though the company is looking beyond the smartphone for growth, it also appears to want to amplify its smartphone chip-related growth by boosting the amount of dollar content it sells into smartphones.

One area Qualcomm is looking to expand its presence is in smartphone fingerprint scanners. Here are three things Qualcomm wants investors to know about its latest fingerprint-scanning tech.

At the highest end of Qualcomm's fingerprint product stack is an under-the-display scanner aimed at "premium-tier" smartphones. This offering can scan up to 1,200 micrometers through an OLED display.

However, these scanners won't just be compatible with phones packing Qualcomm chips; Qualcomm says they'll work with "non-Snapdragon platforms, too."

Although Qualcomm could have opted to make these scanners compatible with Snapdragon-based phones only as a selling point for Snapdragon platforms, the company is instead seemingly looking to profit from these solutions, irrespective of whether a Snapdragon platform is used.

That said, I wouldn't be surprised if Qualcomm offers "bundles" that, in effect, make the addition of the fingerprint scanning solution rather cheap for Snapdragon users.

When will these be available?

Qualcomm says it expects samples of the glass and metal scanners to be available to smartphone makers this month. The first commercial devices using those scanners, Qualcomm says, "are expected to arrive in early 2018."

For the under-the-display scanner, it'll be a little longer. The company says it'll make engineering samples available to smartphone vendors in October, with "commercial samples expected [in] early 2018."

The first commercial devices using the under-the-glass fingerprint scanning technology, the company says, "are expected to arrive in summer of 2018."