There are an estimated 80 million Amazon Prime members in the United States. I'm one. Chances are you or someone in your household are part of the tribe as well. And if you're anything like me, then you've probably increased the number of orders placed on Amazon with each passing year.

In 2009, I placed a paltry 18 orders. That increased to 35 in 2012, then to an impressive 136 last year. This is evidenced by a never-ending pile of cardboard boxes in my apartment. Heck, sometimes I think I'm single-handedly powering the industry's growth. You may laugh (or think my jokes are lame), but that's actually not far from the truth.

The growth in online shopping, no doubt aided by a swelling rank of Amazon Prime members, has led to significant opportunities for companies such as International Paper (NYSE:IP). You may have never heard of the company, but it happens to be a formidable dividend stock -- and one that could be a gold mine for income investors given current growth and pricing trends for something we usually take for granted: cardboard. 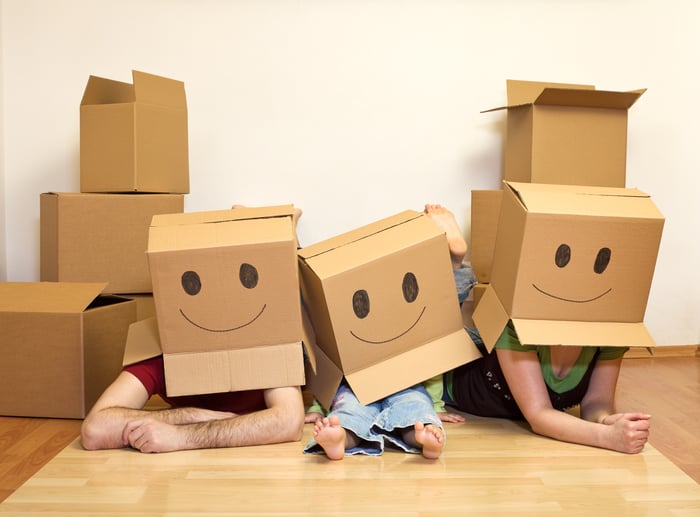 The boring business of pulp and paper

Despite the common perception that the growth of digital technologies is bad for paper-based products, the opposite usually tends to be closer to reality. International Paper has capitalized on multiple technology-spawned opportunities over the last century, and 21st-century opportunities ensure the business will be sticking around quite a bit longer.

The introduction of the personal computer decades ago (ironically) led to more demand for paper products than any single product introduction in history. Today, the dominance of e-commerce and online shopping led to an incredible demand for industrial packaging products such as corrugated cardboard, which generated 63% of the company's sales in 2016. In the United States alone, the company produces 13 million tons of corrugated cardboard each year from 166 container plants -- and it recycles another 1 million tons of paper products.

Industrial packaging is by far the company's largest and most profitable business segment, but it isn't the only significant contributor or growth opportunity. It also sells fibers that become personal hygiene products, manufactures uncoated paper sheet products, offers consumer packaging products (such as coffee containers), and operates a pulp and paper joint venture in Russia.

Many investors may be surprised to learn that good old-fashioned paper sheet products are the company's most profitable business, followed by its vast industrial packaging network, but that just goes to show that paper products aren't going to be displaced from modern life anytime soon. That has big implications for income investors looking for powerful dividend stocks.

Consider that International Paper stock has managed to beat the returns of the S&P 500 for the last 5-year and 10-year periods. 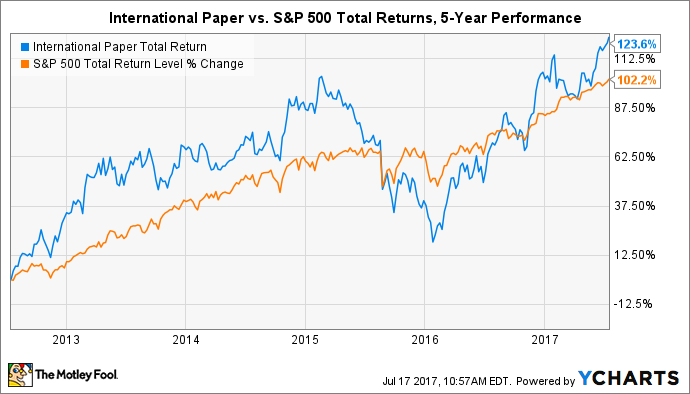 It may be difficult to see from quick glances at financial statements, but the business is healthier and stronger than it has been in quite some time. In 2016, operating cash flow came in at $2.48 billion, which was about $600 million lower, or 20%, than the total achieved in 2014. That coincided with a $2.54 billion drop in revenue in the same two-year period.

However, operating cash flow isn't the right metric to focus on, especially considering that operations are smaller and more focused than they were in 2014. Instead, income investors should turn their attention to free cash flow. Despite changes in the top line, International Paper hasn't let this metric slip below $1.6 billion since 2007. Last year, free cash flow came in at $1.9 billion and has averaged $1.8 billion for the last five years.

That's important considering management expects to use 40% to 50% of free cash flow each year to create shareholder value through dividend payments and share repurchases. The strategy has worked so far for International Paper shareholders: The annualized dividend has jumped from $1.05 per share at the end of 2011 to $1.85 per share at the end of 2016. 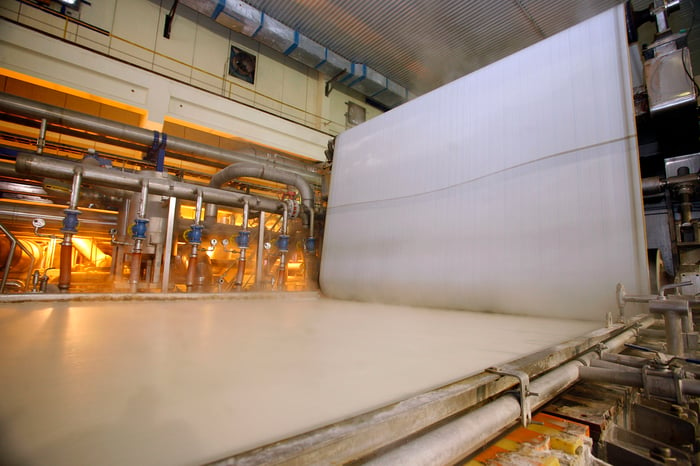 The remainder of free cash flow will be devoted to strategic investments and divestments necessary to keep pace in a competitive global industry. Considering that International Paper maintains the lowest cost profile in the industry, this shouldn't burden its efforts to continue growing the dividend.

In fact, steady and consistent investment in maintaining its fleet of pulp, paper, and containerboard mills over the years may enable record profitability for the industrial packaging segment in the next five years. After maintaining relatively steady production since 2009, corrugated packaging shipments in the United States have begun ticking upward in the last two years. Industry forecasts expect shipments to grow to all-time highs of 408 billion square feet by 2020 -- levels last seen in 1999 -- and continue from there.

The key for investors is that this time really will be different. The North American Packaging Price Index, which measures prices for several categories of products most people just call "cardboard," has set new highs with regular consistently in the last several decades. Packaging prices today are 65% higher than they were in 1999. Perhaps not surprisingly, the packaging index has even recently begun outpacing growth in the Consumer Price Index, which never happened for such long periods of time prior to the emergence of online shopping. 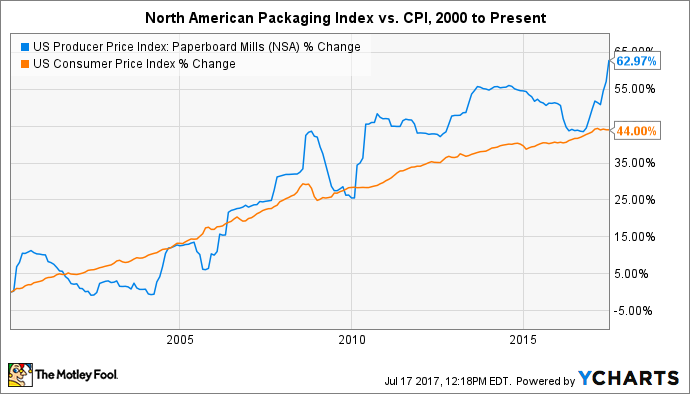 Simply put, growth in volumes and pricing of cardboard products -- in part spurred by incredible demand from the likes of Amazon Prime members -- should allow International Paper stock to become a gold mine for income investors for the foreseeable future. You may have never considered cardboard to be your next great investing opportunity, but the numbers don't lie: I think this has all the hallmarks of a great dividend stock.