Walt Disney (NYSE:DIS) can leverage a hit property as well as any company on the planet.

Whether it's a blockbuster movie like Frozen or an established film universe like Star Wars, the company understands how to wring every dime from fans without making them feel exploited. Disney also has an ability to create new hits while finding new life in old properties.

The company can move characters or franchises from film to TV, to theme parks, to a licensed anything-you-might-imagine, and can then repeat the whole process when the time is right. It's not only a license to print money, it's one that's hard for rivals to duplicate.

Disney isn't perfect. It's struggling with ESPN, which is performing poorly compared to its historic success. Disney also has to catch up on investment in its theme parks after years of neglect. In addition, the cord cutting phenomenon which has hurt its sport network threatens the rest of its television empire.

Despite those worries, Disney remains the premier player in the entertainment space. The company will hit some bumps as the overall cable/television industry moves toward digital delivery, but ultimately its deep roster of characters, major properties, and franchises will see it through. 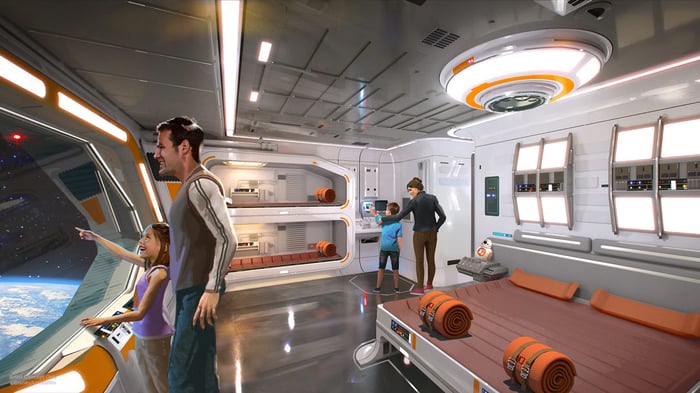 What are Disney's strengths?

Disney was built on its library of cartoon characters and it has dramatically expanded that roster to include live action stars from Han Solo to Captain Jack Sparrow. The company not only owns a huge archive of its self-branded animated movies, it also owns the Pixar, Marvel, and LucasFilm (Star Wars and Indiana Jones) brands. Just in its film business, that allows it to have an impressive lineup of near-guaranteed hits films each year that looks roughly like this:

Basically the company has taken the risk out of movie making. It's certainly possible for a Pixar or even a Star Wars film to fail, but it's not all that likely, and it hasn't happened under the Disney banner.

In 2016, a year in which Disney claimed the global box office crown while setting a company record, it also dominated the domestic box office. The company had 26.3% of the market with only 13 new films released in the year earning over $3 billion, according to Box Office Mojo. Second-place Time Warner (NYSE:TWX) put out 23, while third-place FOX (NASDAQ:FOX) needed 16 (not including Fox Searchlight) to bring in half the box office receipts Disney did.

The difference is that, while Time Warner and Fox had a mix of winners and losers during the year, Disney's only real failures were Steven Spielberg's The BFG which earned $55 million domestically and Pete's Dragon which under-performed at $76 million in the U.S.

Even the disappointing Alice: Through the Looking Glass brought in just under $300 million globally, while Disney's top-eight films for the year each took in at least $200 million in the U.S. Of those eight, five topped $1 billion globally for the year. Neither Warner Bros. nor FOX has a single billion-dollar film.

It's more than movies

Disney's films may be the backbone of the company, but it's all the other ways it can use those properties that make up the company's true strength. Disney's film division is actually its third-highest revenue producing group through the first six months of the year at $4.5 billion, behind Media Networks at $12 billion and Parks & Resorts at nearly $9 billion.

The theme park division, however, owes much of its success to characters from movies. That includes classic Disney characters like Mickey Mouse and Donald Duck, but in recent years the parks have become more reliant on Pixar, Star Wars, and Marvel (where allowed, given that rival Universal Studios has a lock on some key characters due to a deal which predates Disney buying the comic book company.

ABC has less dependence on movie-based intellectual property (IP), though it does have some shows derived from the company's film universes and ESPN is an entirely different entity. The company's cable networks, however, draw heavily from its films with Star Wars, Marvel, and Pixar shows. In addition Disney makes money in its Media Networks division through its successful Marvel-driven partnership with Netflix.

On top of all that, the Mouse House has made just over $1 billion on licensing its various characters through its Consumer Products division in the first half of 2017. In addition, it's also worth noting that, despite the ongoing problems at ESPN, revenue was slightly up year-over-year for the first two quarters in Media Networks, though operating income was down 3%.

While the cable business, and to an extent the network television business, will change due to cord cutting, Disney has content people will pay for. That means that even if its cable networks weaken, the company should be able to monetize its content by bringing it to whatever platforms people are using.

Whether that means creating its own subscription service or working with an existing one, Disney has the IP to thrive. There might be transitional bumps in the road, as ESPN is experiencing now, but good content will find an audience. Disney has content and a machine built to make money from it. That should serve the company well, even as consumer behaviors change.