The biggest challenge snack food companies like Mondelez International (NASDAQ:MDLZ) face is the growing awareness many consumers have about what's in the food they eat and their desire to eat in a way they consider healthier. Eating foods with simple, recognizable ingredients is resonating. According to a Nielsen study, 77% of respondents say that snacks having "natural" ingredients is at least moderately important, with 45% saying it's very important.

Another study from Nielsen found that 62% of respondents around the world say that the absence of undesirable ingredients is more important than the inclusion of "beneficial" ones. Fat and sugar are on the list of ingredients people say they want to cut and this is a hurdle for Mondelez, whose brands include Cadbury, Chips Ahoy!, Oreo, and Sour Patch Kids.

But Mondelez is one of the world's largest snack food companies -- with more than $25 billion in annual revenue -- and it's not going to sit idly by and let its brands get the cold shoulder from health-conscious eaters. Let's take a look at what Mondelez is doing to address this problem. 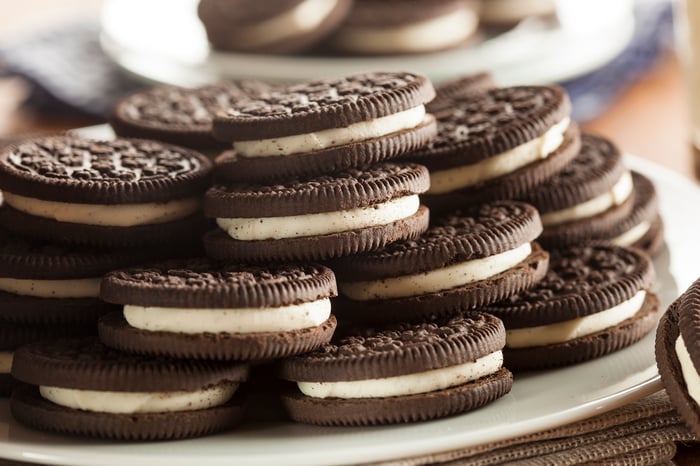 How management is addressing the better-for-you trend

Mondelez has been introducing several new snacks in its moves to become the leader in "well-being snacks," including belVita biscuits, GOOD THiNS, and a new line of Triscuits that eliminates several artificial ingredients, including the ones that some health experts have identified as the most harmful: high-fructose corn syrup and hydrogenated oils.

Mondelez's new well-being products are performing well, with particular areas of strength in belVita biscuits, which were up mid-single digits globally in the most recent quarter, and GOOD THiNS crackers, which was the top new snacking brand in the U.S. in 2016, according to Mondelez. The company has more innovation planned for the second half of 2017 including "wholesome savory biscuit brand" Vea and revamping existing products like Triscuit.

Mondelez has made a commitment that by 2020 half of its products will be in the well-being category. Additionally, the company is focused on making products that have reduced sodium and saturated fat, while increasing the use of whole grains.

The snack giant has also been making efforts to improve the sourcing of ingredients by pledging to only use 100% cage-free eggs. Mondelez currently uses cage-free eggs in its European chocolate brands, and the company pledges to meet the standard across all products in North America by 2020, and Europe by 2025.

Areas of strength for Mondelez

While it might seem like Mondelez is facing an uphill battle to find growth, it has actually been doing quite well around the world. Mondelez's "power brands" -- including Oreo, belVita biscuits, Milka, Cadbury Dairy Milk, Trident gum, and Halls cough drops/candy -- make up 70% of organic net revenue. In 2016, the power brands' organic net revenue increased 2.8% to $18.8 billion. Power brands continued to show good performance in the first quarter of 2017, growing 2.5% and outpacing category growth. Management has guided for at least 1% organic net revenue growth for 2017, with adjusted earnings per share (excluding currency fluctuation) expected to grow double digits.

In addition, Mondelez is finding chocolate to be a product where it can play some offense. In September 2016, Mondelez entered China's $2.8 billion chocolate market, where its Milka brand has already gained 2.4% market share and achieved 40% brand awareness.

Mondelez is dealing with a substantial shift in consumer eating habits, but recent growth in its power brands shows it will likely survive through this transition. As the company shifts more products to the well-being category and continues to adjust its ingredients to meet consumer demand, Mondelez looks like a snack food company that will be around for a long time.