It's hard to find anyone actively in "favor" of nuclear weapons. But that doesn't mean it will be easy to get rid of them.

On Friday, July 7, three days after America celebrated its independence, the United Nations voted for independence from nuclear weapons. By a vote of 122 for, 1 against, and 1 abstention, the UN General Assembly approved the world's first global, binding "Treaty on the Prohibition of Nuclear Weapons." Not only does the new treaty ban nuclear weapons testing, use, and proliferation, it bans manufacturing, acquiring, and even possessing nuclear weapons.

By all rights, this news should have shaken the world. That it didn't suggests that there may be more to this story than the headlines suggest. 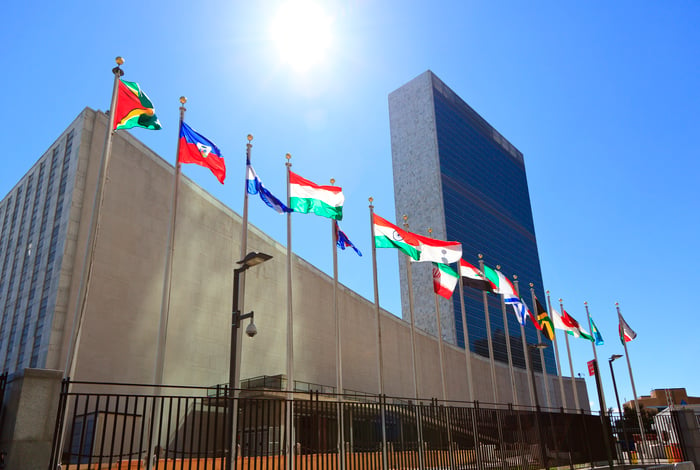 Depending on whom you ask, there are 195 or 196 recognized, independent countries in the world today. The fact that only 122 of them voted for the new nuclear ban tells you right away that the consensus in favor of banning nukes is not universal. Only about two-thirds of the member nations participated in discussions of the new Treaty. And none of the five nuclear-armed nations who make up the permanent members of the UN Security Council, nor any of the handful of other states (including India, Pakistan, North Korea, and Israel) that are believed to possess nukes voted in favor of the Treaty.

Still, in the opinion of Arms Control Association executive director Daryl Kimball, as he told the New York Times, "the treaty can, over time, further delegitimize nuclear weapons and strengthen the legal and political norm against their use."

Having been approved, the treaty will be open for signature and ratification by any member state of the UN beginning Sept. 20. (Signing the Treaty is only the first step in joining it -- a nation's government must also ratify it. In the U.S., for example, this would happen by Congress enacting it as a federal law, and the president signing that law into force.) Once 50 nations have ratified the Treaty, it would go into force as international law.

In a public statement, the United States, Britain, and France have jointly declared their intention to never "sign, ratify, or ever become party to" the treaty.

To the contrary, here in the U.S., former President Barack Obama initiated an effort four years ago to upgrade and expand America's nuclear capability. That program has since grown into a 30-year, $1 trillion nuclear weapons program involving the upgrading of missiles, the development of a new stealth bomber, and the wholesale replacement of the nation's nuclear ballistic missile submarines.

Multiple defense companies stand to benefit from these nuclear upgrades, including:

Echoing his predecessor, President Donald Trump, too, announced an intention to "greatly strengthen and expand [America's] nuclear capability until such time as the world comes to its senses regarding nukes." But does the UN's passage of an international Treaty "regarding nukes" qualify as the world "coming to its senses"? Could it derail this massive, trillion-dollar plan for nuclear rearmament?

That depends -- and it depends in part on how the United States itself decides to proceed. You see, while most of the world is now on record opposing nuclear weapons via support for the treaty, Article 34 of the Vienna Convention on the Law of Treaties confirms that a treaty cannot have legal effect upon a country that has not signed it -- such as the U.S.

Theoretically, a treaty codifying near-universally accepted principles of "customary international law" can bind non-signatories such as the U.S. But when I queried Alyn Ware, global coordinator for the international organization Parliamentarians for Nuclear Non-Proliferation and Disarmament, he confirmed that it's unlikely the treaty would be able to create such customary international law -- at least as long as all nuclear-armed states reject it.

The upshot of all this, then, is that even if every single one of the nations that approved the Treaty proceeded to sign and ratify it, the Treaty will still impose no legal obligation upon the United States to get rid of its nukes -- nor to abandon plans to upgrade our nuclear arsenal. As such, the Treaty poses no immediate threat to the businesses of Northrop Grumman, General Dynamics, Huntington Ingalls, Aerojet Rocketdyne, or Orbital ATK.

That said, if nations quickly begin signing onto the Treaty come September, and support for the Treaty grows, this trend could still give President Trump pause. At the least, evidence of a growing international consensus against building and possessing nuclear weapons could provide ammunition to congressional critics who oppose spending on the U.S. nuclear arsenal, such as Senators Edward Markey and Elizabeth Warren of Massachusetts, Al Franken of Minnesota, and Bernie Sanders of Vermont.

Long story short, even if the Treaty on the Prohibition of Nuclear Weapons doesn't actually "prohibit" these companies from earning their nuclear profits, it could still make it harder to earn them.