Please ensure Javascript is enabled for purposes of website accessibility
Log In Help Join The Motley Fool
Free Article Join Over 1 Million Premium Members And Get More In-Depth Stock Guidance and Research
By Andrew Tonner - Jul 24, 2017 at 9:36AM

Shares of Frontier Communications have fallen over 80% over the past 12 months for a reason. Will the pain continue?

Brutal doesn't begin to describe the past year for Frontier Communications (FTR) shareholders. Nothing has gone right, and the market has noticed, giving Frontier one of the most heavily shorted stocks on the market today.

Things are so bad, in fact, that the stock has declined by an astounding 82.2% over the past year, against a 25.5% gain in the Nasdaq Composite over the same period. 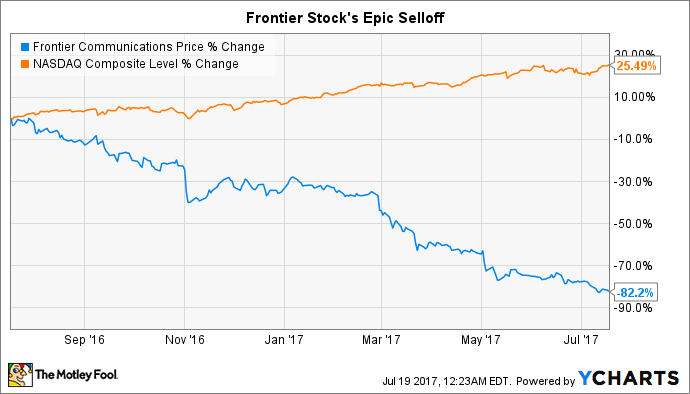 So what caused this sell-off, and are further share-price declines in store? Let's examine each question.

Over the past several years, Frontier has doubled down on legacy telecom services, hoping that economies of scale by way of consolidation could help buoy its performance, even as wireless standards continue to grow in popularity.

The company funded that deal through a mix of debt and equity financing, but the former is particularly important, considering Frontier's current predicament. Over the years, Frontier has engaged in a series of roll-up acquisitions that helped make it one of the largest U.S. providers of legacy telecom services. Along the way, Frontier also amassed over $17 billion in debt, which lead to its current state of crisis.

Worse still, the company has seen a spike in its cancellation rate, also known as churn, leading to concerns that Frontier will be unable to repay its debts. The Wall Street Journal reports that Verizon stopped recording delinquent accounts during the period between the merger's announcement and closing. This meant Frontier was hit with a higher-than-expected surge in customer defaults as it integrated its newly purchased assets.

The company's soaring debt load has also given rise to concerns that the company may not be able to meet its interest payments. The first major repayment date is still several years off, when Frontier will need to repay $2.4 billion in principal in 2020. However, the company generated only $2.0 billion in cash from operations over the past 12 months, and that doesn't include necessary expenditures such as maintaining its network. Worse yet, the discouraging customer attrition metrics imply that Frontier will be unable to grow its cash flows as consumers continue to move away from traditional phone services in favor of wireless. 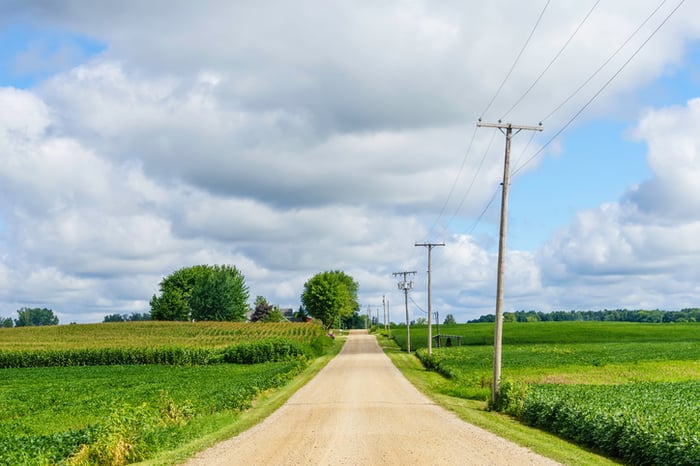 Where does Frontier stock go from here?

Companies facing looming debt repayments can typically refinance those debts, pushing out their due dates. However, Frontier may not be able to secure such financing if its business metrics don't improve, which is why the company recently enacted a series of cost-cutting measures aimed at bolstering its financial profile.

As part of its Q1 earnings announcement, Frontier disclosed plans to reduce its dividend by just over 60%, from $0.105 per share to $0.04, effective immediately. Management said the plan should help Frontier save $300 million annually, and it believes it can increase those savings to a run rate of $400 million annually by the end of 2018. This move will allow the company to pay down debt, with the goal of lowering Frontier's leverage ratio from 4.39 to 4.0 by the end of 2019, and eventually reaching 3.5 by the end of 2021.

Assuming the company can implement the program, it should go a long way toward helping Frontier reduce its debt burden, from one that could be disastrous to one that's big but maybe not fatal. However, customer retention will also play a significant role in determining whether Frontier survives this dark chapter in its history.

Here, the jury is out. Frontier claims it has weathered the worst of its subscriber churn crisis, but the company's growth strategy is predicated on further building out its fiber broadband network at the same time national telecom powers such as Verizon and AT&T  hope to bring more of their services over cellular networks. Investors should, therefore, think long and hard before trying to buy into Frontier as a contrarian turnaround investment.