Please ensure Javascript is enabled for purposes of website accessibility
Log In Help Join The Motley Fool
Free Article Join Over 1 Million Premium Members And Get More In-Depth Stock Guidance and Research
By Asit Sharma – Jul 24, 2017 at 11:41AM

The organic foods pioneer reports fiscal third-quarter earnings this week. Investors should treat this as a "back-to-basics" report.

Whole Foods Market (WFM) reports its fiscal third-quarter earnings on Wednesday after the close of trading. In mid-June, the natural and organic foods grocer announced a departure from the public markets via its sale to Amazon.com (AMZN -1.57%). With the transaction slated to close "in the second half of 2017," it's possible that this could be Whole Foods' last reported quarter as a public company.

Given that the iconic non-conventional grocer will soon join the Amazon juggernaut, and shares have now settled within cents of Amazon's offer of $42 per share, why should investors pay attention to this report?

Several persuasive reasons exist. First, and most obviously, until the closing transaction press release is issued, nothing's settled. Shareholders should understand that a chance always exists, however small, that a proposed corporate marriage will hit the rocks before nuptials occur. So if you own a stake in Whole Foods, it's prudent to pay attention to earnings, just in case. 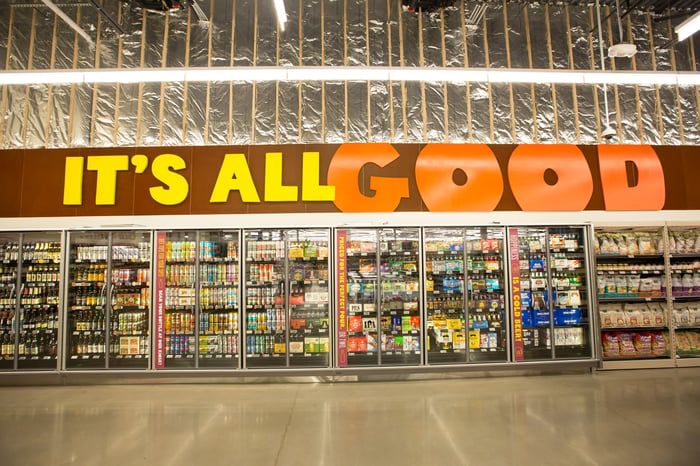 On a related note, for those who want to continue to participate in the company's success, gauging the grocer's top-line rejuvenation is still quite important. Now, the only way to share in Whole Foods' outcomes going forward, and that indirectly, will be to pick up shares in Amazon. But to understate the case, Amazon itself has been a pretty decent investment over the years.

A different sort of earnings report

Now that CEO John Mackey and the rest of the management team will no longer have to worry about analysts' expectations, and likely to avoid having to tiptoe around confidential strategy currently being discussed with Amazon, the company has elected to drop its customary conference call with analysts this quarter.

Thus, investors will find that some of the "color" they're used to will be missing from this report. They can, however, expect to be updated on a few key fronts as well as all essential knowledge that shareholders have a right to.

As always, comparable sales, or comps, will provide a litmus test of the grocer's current year strength. Amidst an onslaught of competition, Whole Foods is still seeking to stabilize comps, and its projections call for a full-year comps change of "approximately -2.5% or better."

Last quarter, comps came in at minus 2.8%. The drop was precipitated by lower traffic in the form of a 3% drop in transactions. Basket size, i.e., the average purchase size per customer, actually increased by a very slight 0.2%. Through the first two quarters of fiscal 2017, comps have decreased 2.6%.

The comps number this week is a make-or-break figure as far as the company's full-year guidance is concerned. Given that the first six months have hit the bottom of the projected range, any further decline makes it unlikely, with a single quarter remaining, that the company can finish out the year with a negative 2.5% or better showing.

Sales per gross foot, which typically fall high above industry averages, comprise another important benchmark to watch. Whole Foods achieved sales per square foot of $880 last quarter, and it's possible that the closure of nine underperforming locations in the second quarter will have provided a boost to this number.

Finally, shareholders should check on Whole Foods' gross margin, which has slipped roughly 60 basis points during the first half of the year, to 33.8%. As the company has turned slightly more aggressive in offering discounts and promotions to sustain store traffic, its cost of goods sold has inched up in kind.

Whole Foods' management is generally protective of the company's profits, so while a substantial decrease in gross margin isn't expected, it's possible that the reading could slip another 50 to 100 basis points in the third quarter.

To sum up, although we may see some merger-related disclosures, investors shouldn't anticipate a detailed strategy rollout when Whole Foods issues its earnings press release on Wednesday. Rather, think of this as a report focused on business fundamentals, which in itself is always good information to consider.