Before Schlumberger (NYSE:SLB) will be able to start posting profitable quarters again, the global oil market needs to stop sliding. Last quarter, the company's North America earnings began to pick up again, but declines across the globe more than offset those gains. This quarter, though, overall activity across the world showed the slightest signs of a rebound. Couple that with another strong quarter of gains in North America and you have a second quarter that almost brought Schlumberger back into the black.

Here's a summary of Schlumberger's results and where the company stands now in the global pecking order of oil services companies. 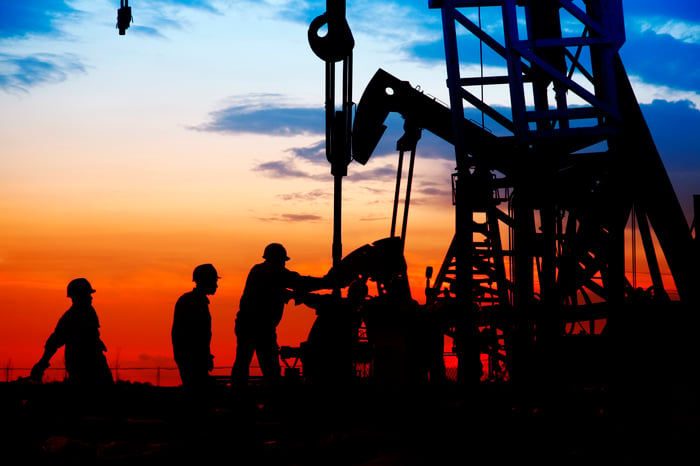 Last quarter, there was a clear bifurcation between Schlumberger's results in North America and the rest of the world. This quarter, however, that difference was less pronounced. Sure, North American revenue did increase 18% compared to the prior quarter, but the rest of the world posted a 4% gain as well, leading to an 8% overall revenue boost. The most notable non-North America gains came from Mexico and Argentina. Increases in Mexico are mostly related to the government there opening the oil industry up to foreign investment, while Argentina's vast shale deposits have been garnering attention from integrated oil companies for some time.

Even though Schlumberger did post some promising results overall, those results weren't good enough to offset the $500 million in charges it took this quarter to result in a net loss. Charges this past quarter were related to writing off the fair value of some promissory notes that some clients in Venezuela owe it. With that country's oil industry in disarray, chances are that those notes will not be paid back in full.

From a business segment standpoint, Schlumberger's results tell the story of the early stages of a recovery. Reservoir characterization is an early-stage expenditure for producers that are looking to understand how to best extract oil and gas from new discoveries. Those modest upticks in international revenue are likely coming from this business segment.

Almost all of the gains from its drilling and production segments are from increased activity in the United States. There was also some uptick in business in Russia and the Caspian states, but that has more to do with the seasons than anything else (you try drilling in Russia in the middle of winter and see how far you get). The largest blemish on these results was its Cameron business, which shouldn't come as much of a surprise. As producers advance offshore projects from the reservoir characterization stage to construction, that's when the Cameron business will shine. 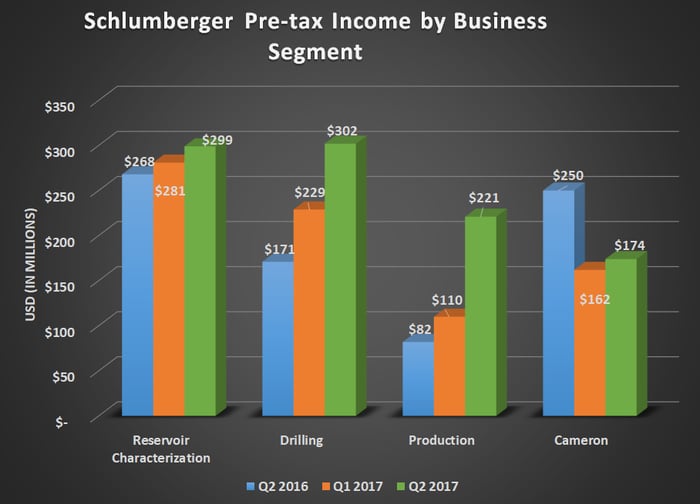 On the cash flow and balance sheet side of Schlumberger's results, things still look OK. Like last quarter, there was a rather large working capital build that put a dent in free cash flow. That isn't much of a concern, though, considering that the company still has $6.2 billion in cash and short-term investments sitting on the books. That was more than enough liquidity to cover any shortfalls with its dividend and even buy back $398 million in stock.

No oil executive wants to say with a lot of confidence that the market is roaring back, but CEO Paal Kibsgaard's most recent statement was probably the most optimistic he has been in quite some time.

While the activity outlook in North American for the second half of the year remains robust, we are now also seeing more positive signs in the international markets with increases in activity and new project plans starting to emerge in several GeoMarkets. The strengthening in the international markets has so far been concentrated around land activity in Western Siberia and in the OPEC Gulf countries but we are now also seeing an increasing number of new offshore projects being prepared for tendering and final investment decision (FID) in many of the world's shallow water basins.

A higher rate of FIDs in the offshore market is music to Schlumberger's ears. Its business has much closer ties to the offshore market than most of the other major oil services companies, especially after acquiring Cameron International a couple of years ago and the OneLNG partnership with Golar LNG. If these pockets of the oil market start to pick back up again soon, then we can expect much better results from Schlumberger soon.

By no means are Schlumberger's results good. The company is still losing money, so there is much more progress to be made. That said, the winds of the oil market are shifting in its favor. Management is still capitalizing on the overall weakness in the international market, as evidenced by the recent announcement that it was buying a majority stake in Eurasia Drilling Company, the largest fleet of land rigs in Russia.

Schlumberger remains the world's dominant oil services company, and there aren't any signs to suggest that that position will be at risk anytime soon. If the company can continue to capitalize on the weaker international market, then results could look much, much better in the coming quarters.