Many American investors are currently enamored with all the activity happening in the oil patch these days, and some assume a recovery is underway around the globe. That isn't the case, though, and you only need to look at Schlumberger's (NYSE:SLB) most recent results to find proof.

For more than two years, the company has tried to slim down and remain profitable, but persisting declines in international oil and gas activity continue to hit the top and bottom lines. Here's a rundown of the company's most recent results and how CEO Paal Kibsgaard thinks Schlumberger (and others) can improve conditions for the oil services industry. 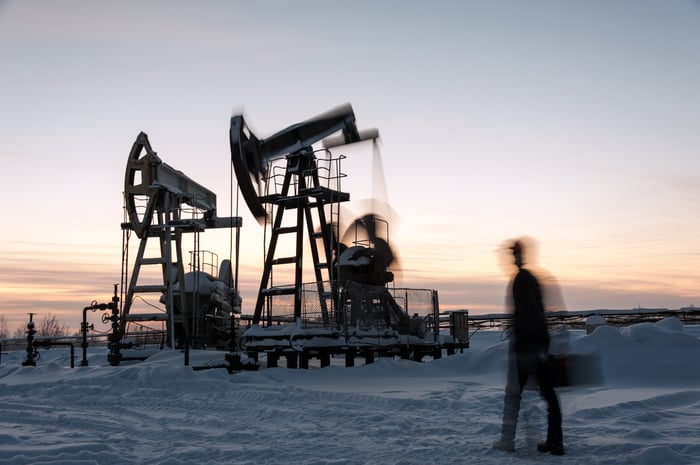 There are two things to keep in mind when looking at Schlumberger's results this quarter. One is that the fourth quarter is typically a stronger quarter for the company as many exploration and production companies renew contracts for certain services or software Schlumberger provides. Conversely, the first quarter is seasonably weaker, so take sequential differences with a small grain of salt.

Several of the themes we saw last quarter were rather prevalent in this most recent earnings report. Land drilling, especially in the shale regions, is picking up in earnest in North America while other parts of the world are still on the decline. Management did point out was that activity in the Middle East was unexpectedly lower, but that was a product of cuts from the OPEC nations. One sign of hope, though, was that revenues from both Latin America and Africa were flat, which suggests a trough for the cycle. 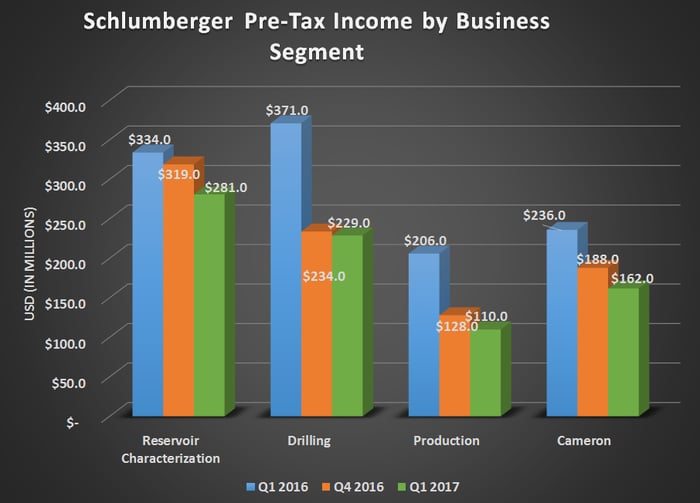 On the cash flow side of the financial statements, the company's $15 million in free cash flow can look a little concerning at first, but the first quarter typically involves a large working capital build for the year and is drawn down in the fourth quarter. In the fourth quarter of 2016, there was a $416 million drawdown in working capital versus a $791 million build this quarter. These working capital builds and drawdowns all typically come out in the wash, so no one should be too concerned with cash flow for the first quarter.

One person you can count on to give a thorough overview of the oil and gas industry in a press release or conference call is Schlumberger's CEO, Paal Kibsgaard. Last quarter, he threw a little shade at North American shale producers for focusing more on production growth at the expense of full-cycle returns and creating capital over time. This quarter, he took equipment and services companies to task for simply fighting for the few table scraps that exploration and production (E&P) companies have thrown them lately:

As the industry builds momentum, industry cash flow and productivity remain under pressure and limit the industry's availability to increase present levels of E&P investment. At the same time, the value chain remains focused on trying to capture the limited value that is created, rather than seeking new ways to collectively create more value. this approach is not sustainable, either from addressing the underlying industry challenges or from ensuring that the future supply of hydrocarbons can meet projected growth in demand.

Schlumberger is looking to do its part to combat this infighting through some interesting mergers and acquisitions, as well as partnerships. The first one was the merger with Cameron, which brought together Cameron's subsea equipment manufacturing with Schlumberger's design and subsea drilling and construction business.

More recently, though, the company signed a deal with Weatherford International in which the two will combine their North American fracking operations into OneStim. The idea here is to combine some of the lower-margin commodity services such as pressure pumping with some higher-end technologies that will make the overall service more valuable to E&Ps and drive margin improvement for the service companies.

In addition to discussing the infighting among service companies, Kibsgaard also touched on the need for more spending from E&P companies as reservoir depletion rates, especially in non-OPEC nations, are rapidly accelerating. This is a by-product of E&Ps trying to milk as much as they can out of existing production sources during the downturn with minimal investments. Without reinvestment, Kibsgaard says, the industry could be faced with a medium-term supply crunch.

Schlumberger's results are still suffering from the malaise in international oil and gas business, and that is likely going to last a little while longer as producers still try to replenish cash coffers on oil at a rather modest $50 a barrel -- many places around the world still lose money at that price. Over the next year or so, Schlumberger's results are going to lag behind its peers that focus more on North American shale (for instance, Halliburton). That said, Schlumberger remains the dominant player in the global oil services business and has a history of generating value for shareholders over the long term. The recent bumps it's experienced shouldn't change its course.