Please ensure Javascript is enabled for purposes of website accessibility
Log In Help Join The Motley Fool
Free Article Join Over 1 Million Premium Members And Get More In-Depth Stock Guidance and Research
By Travis Hoium - Jul 25, 2017 at 8:10AM

Canadian Solar is one of the biggest solar manufacturers in the world, but it isn't a safe investment.

Everything is looking up for Canadian Solar Inc. (CSIQ -3.35%) at the moment. Solar panel prices are reportedly on the rise and a surge in Chinese solar demand could lead to a rebound in the future.

But there are still risks ahead for this solar giant. Here are three reasons Canadian Solar stock could tumble. Second- and third-quarter results will likely be strong because there's a surge in demand for solar panels in China and the U.S. In China, developers are trying to get projects built before feed-in tariffs and other incentives are reduced. In the U.S., there's a push to buy panels before the Suniva trade case potentially kills the market. This has resulted in a reported surge in panel prices from lows around $0.35 per watt early this year to as much as $0.50 or $0.60 per watt on the spot market.

But there could be a slump after this euphoria subsides. If the Suniva case goes against the solar industry, Canadian Solar could essentially be shut out of the market. And in China, installations should fall in the second half of the year. And if you remember last year, the same thing happened and panel prices, along with revenue and earnings, plunged. There's a big risk the currently strong conditions simply won't last.

Technology is always a challenge in the solar industry, but Canadian Solar may have built out its capacity at just the wrong time. In the last year, manufacturers have been building out mono-PERC capacity, a product that is higher efficiency than the multi-silicon or even mono-silicon that Canadian Solar relies on for most of its revenue.

Canadian Solar does have a mono-PERC product, but the fact that it has multiple GW of older capacity could be a problem. If the old capacity becomes underutilized or shut down altogether -- something competitors like SunPower and First Solar have done recently -- it could lead to a big hit to the company's income statement and balance sheet. And that's where the real risk lies for Canadian Solar.

To build new capacity, Canadian Solar has taken out billions in debt, as you can see below. But it hasn't seen any real financial benefit as a result. And when the bubble I mentioned above deflates, the company could be left with out-of-date manufacturing equipment and billions in debt that it can't pay back. 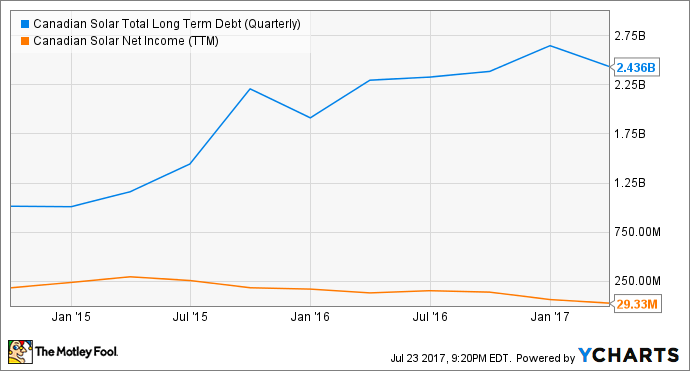 There are some remedies to reduce debt, like selling projects the company has developed around the world. And with an estimated $1.6 billion in project value, the debt load could be reduced substantially. But Canadian Solar has been selling projects for years, and it has failed to remedy Canadian Solar's situation.

If the core manufacturing business can't generate enough cash to fund debt, Canadian Solar could be in real trouble. It's one of the largest solar manufacturers in the world, and companies that once held the crown as the biggest solar manufacturer include Suntech Power and Q-Cells, which went bankrupt, and the financially distressed Yingli Green Energy. Like the companies before it, Canadian Solar is in a high-risk position in the solar industry.