Discipline was the name of the game to help protect General Motors bottom line despite slightly weaker sales figures. Here are some highlights for the second quarter and what to watch for next.

Tuesday brought investors the first of the Detroit automakers' second-quarter earnings with General Motors (GM -0.24%) managing to beat analyst estimates on the bottom line, despite a weaker top line. As new light-vehicle sales in the U.S. peak, it's been critical for automakers to offset declining sales with pricing and incentive discipline, and that's exactly what GM has done during the second quarter. Here are the key figures and highlights.

Starting from the top, GM's net revenue checked in a little soft with a 1.1% decline to $37 billion, compared to the prior year, below analysts' estimates calling for $40.15 billion. Adjusted for special items, which include charges associated with the sale of its European operations, EBIT-adjusted margins checked in at 10%, which is a very healthy level for global automakers. EBIT-adjusted earnings checked in with a 4.3% decline to $3.7 billion, but adjusted earnings per share jumped 5.6% to $1.89, well above analysts' estimates calling for $1.69 per share.

"Disciplined and relentless focus on improving our business performance led to a strong quarter and very solid first half of the year," CEO Mary Barra said in a statement. "We will continue transforming GM to capitalize on growth opportunities and deliver even more value for our shareholders." 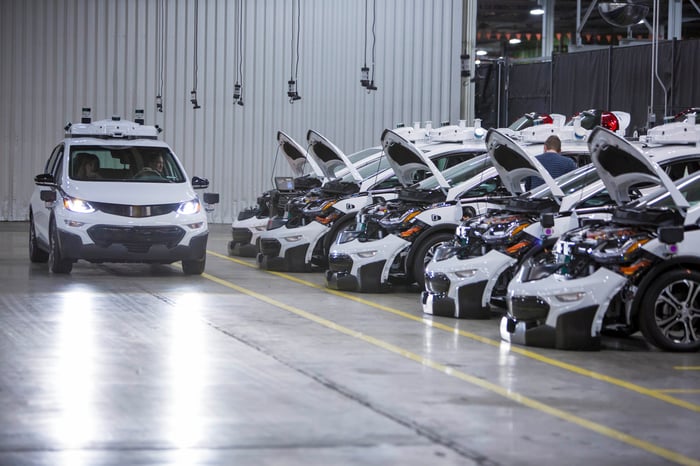 One of General Motors' main objectives over the past couple years has been improving its return on invested capital, or ROIC. It's executed well and its ROIC-adjusted remained a strong 30.4% during the second quarter, despite declining 210 basis points from the prior year -- keep in mind its full-year ROIC guidance is 25%.

GM also had a series of quiet victories across the globe. North America continues to power GM's total results by a large margin, but improvement in its GMIO, GMSA, and GM Financial are welcome developments. In the second quarter, its GMIO EBIT-adjusted results improved $200 million compared to the prior year, up to $300 million, and its GMSA region was able to break even. Meanwhile, as GMF continues to increase its retail penetration of GM sales it posted a record EBT-adjusted $400 million during the second quarter.

As previously mentioned, the key moving forward is for automakers to protect the bottom line with disciplined pricing and incentive strategies, and the graph below shows a modest decline in incentives per unit from the first quarter through the second quarter. 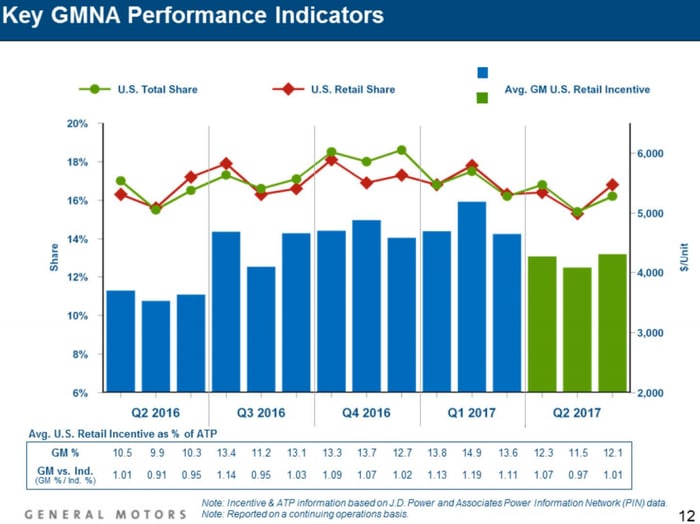 But one thing investors need to keep an eye on is GM's inventory levels. As summer is often accompanied by plant shut downs, inventories tend to increase in preparation, and that's partly why GM's inventory increased 273,000 units from the prior year. At the end of June that put GM's days' supply of cars at 105, far higher than the 70 days' supply the automaker is aiming for by year-end and higher than the 90 days' supply it originally projected for the halfway mark. GM CFO Chuck Stevens said the automaker plans to produce 150,000 fewer vehicles during the second half of 2017, compared to the first six months, to help trim inventory levels back.

This was a solid quarter for Detroit's largest automaker and perhaps the largest takeaway is that if the company can continue to protect its bottom line despite a decline in sales and other concerns, the market's doom and gloom narrative could be overdone for automakers.