Sales of new vehicles in the U.S. market go up, and they go down -- welcome to the cyclical automotive industry! Of course, there are numerous variables that make each cycle different than the one before it. Right now, auto sales are plateauing, and there's one factor that has some analysts concerned about sales forecasts. Let's look at the issue, and what it means for General Motors (NYSE:GM) and Ford Motor Company (NYSE:F).

Sales projected to rise, for now

U.S. new-vehicle sales are expected to rise slightly year over year during May; leading industry forecaster LMC Automotive anticipates 2017's total sales will check in at 17.2 million units, just slightly below last year's. For the most part, any time the industry hovers near record levels, and the popularity of profitable SUVs and trucks is rising, that's a good thing for Detroit. But one factor that could potentially dampen that optimistic viewpoint is a major wave of vehicles coming off lease over the next few years. 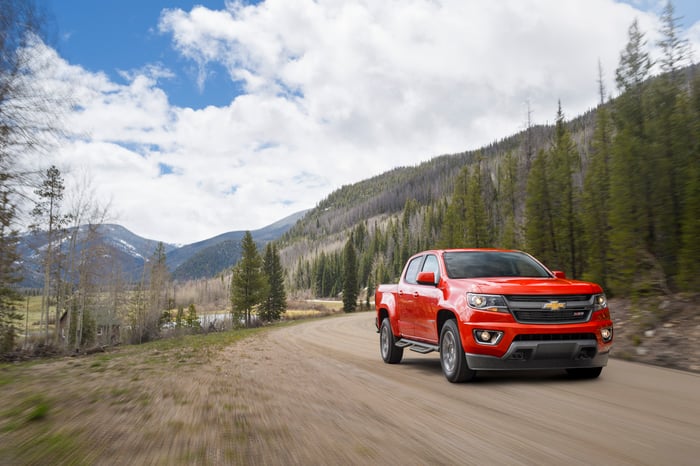 This sales cycle has been a little different than prior cycles due to the rapid rise in vehicle technology. More vehicles are packed with high-dollar infotainment systems, premium packages that upgrade everything from racing specs to safety, new autonomous-vehicle technology such as lane assist -- the list goes on. In addition, with improved fuel efficiency across the board, the popularity of larger (and much more profitable) SUVs and full-size trucks is soaring. All of these factors contributed to a rapidly rising average transaction price. Look at General Motors' graph below for proof. 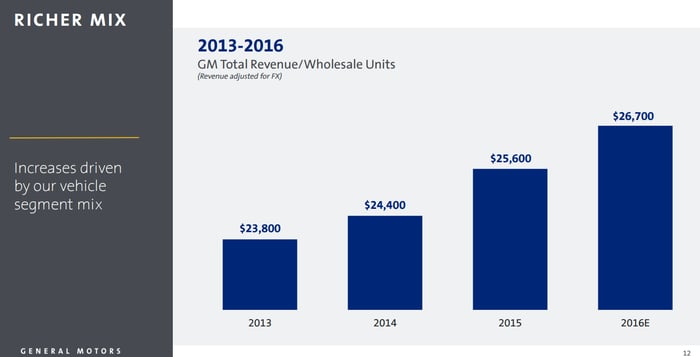 As the market had plenty of pent-up demand, and consumer sentiment about the economy was improving daily, people opted to step up and purchase higher-priced vehicles. To offset a heftier price tag, many consumers chose to extend their loan length -- the average of which now sits at a record high -- or lease their vehicle. When you consider that leasing a new vehicle gives the customer an average payment of $92 less per month than financing it, according to Experian, it's understandable why that option proved so tempting. However, a high number of leased vehicles becomes a problem for automakers once they go off lease.

A well-respected Bank of America Merrill Lynch analyst, John Murphy, offered this dose of reality recently, according to Automotive News: "If the industry is not large enough to absorb the 3.5 million units coming off lease this year, we may see significant pressure on used-vehicle pricing ensue this year in a very material way and spike down the cycle faster and more furiously than even we're expecting."

Furthermore, as many as 5 million off-lease light-duty vehicles could hit the market by 2021. There's no question that once those leased vehicles arrive on used-car lots, they'll give consumers a viable alternative to purchasing a high-priced new vehicle.

For Detroit automakers that rely on North America for the vast majority of their profits, this is obviously bad news. Murphy goes on to note that it's possible that, if the market can't handle the sizable wave of off-lease vehicles, new-vehicle deliveries could fall to 13 million units annually as soon as 2021, which is far faster than the current forecast of that happening in the mid-2020s. Also, what's often overlooked is that the surge in off-lease vehicles will certainly pressure used-vehicle pricing as well. And lower used-vehicle pricing could quickly put a dent in the financing business segments of Ford and General Motors, divisions that generate significant profits for both companies.

Investors will have to wait to see how this plays out, and automakers forecast that this sales cycle is set to plateau near record-high levels for the foreseeable future. But one thing is for sure: The leasing trend that aided this sales cycle isn't going to make things any easier for Detroit down the road.