Everybody loves a company with a good secret weapon or competitive advantage, but many investors overlook Ford Motor Company's (NYSE:F) own secret weapon: its finance division. Ford Credit added $466 million to Ford's total pre-tax profit during the first quarter, about 21% of the total, and was more profitable than all of the automaker's regions outside North America combined.

However, for all the pros that come with Ford Credit, there are some drawbacks. While the financing division is highly profitable most years, when recessions hit or residual values on vehicles plunge, it can put significant pressure on the bottom line. That's why some analysts are concerned about Ford Credit as the U.S. market plateaus and residual values continue to drop because of an increase in off-lease and used vehicles.

Let's look at Ford Credit's results during the first quarter and see if there's any cause for concern. 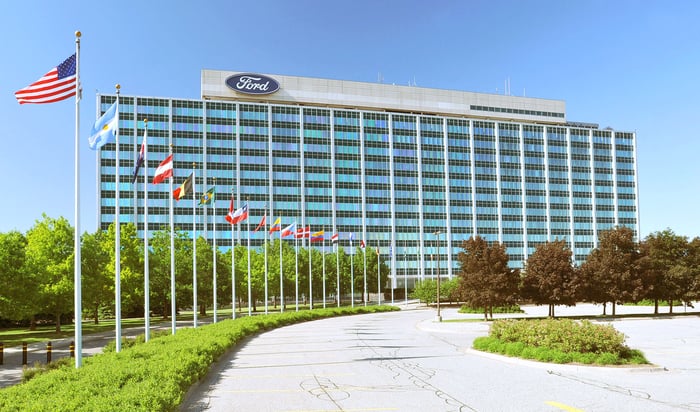 The majority of Ford Credit's business deals financing to consumers. It takes on large sums of debt, which is why Ford's total debt is misleading, and generates revenue and profit by lending it out through leases and other services. This process is extremely profitable, and since many automakers don't have an in-house finance division, it also offers a significant advantage for Ford. It's an attractive enough business that General Motors (NYSE:GM) has focused on rapidly expanding its own GM Finance, after being forced to sell its former finance arm during the past recession.

With that said, let's check out some numbers from the first quarter. Ford Credit's net receivables increased 6% to $133 billion, led by retail financing, but its pre-tax profit declined 6%, in large part because of declining residual values and supplemental depreciation.

While Ford Credit's top and bottom lines are important, savvy investors should look at a few additional metrics to help judge the division's health.

Ford's average placement FICO score improved from 732 to 741 in the first quarter. Generally speaking, a higher average score is good news for Ford, as it should lead to less risky financing and more stable profitability. Despite an improving average FICO score, Ford's over-60-day delinquencies percentage moved from 0.14% to 0.16% during the first quarter. Its loss to receivables moved from 0.44% to 0.54% during the same time frame.

It's important to note that while the two metrics moved unfavorably, the metrics are still easily within Ford's historical norm, so there's nothing to be concerned about just yet. One thing investors need to keep an eye on is Ford's residual values.

When Ford Credit completes a lease, it's forced to assume a value for the vehicle once it's returned at the end of the lease. A costly problem arises if the vehicle's value deteriorates more than anticipated, as it takes a chunk out of Ford's bottom line. And lower residual values are already making a real impact: 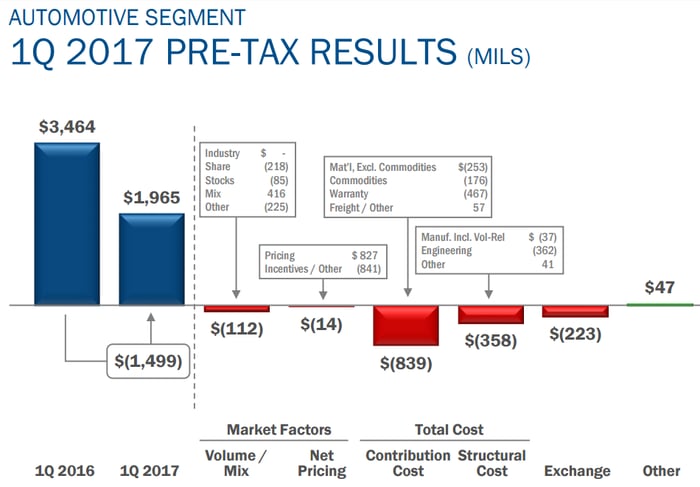 Even as some metrics trend unfavorably for Ford Credit, there aren't any red flags yet, and the metrics remain within expectations. Also, Ford Credit leases only about 24% of its retail sales, lower than the industry's 31% average -- making its portfolio less risky in terms of residual value headwinds. Ford Credit is still healthy and expected to generate $1.5 billion in pre-tax profit during 2017 while maintaining a competitive advantage for Detroit's second-largest automaker.