Change is coming to Disney's (DIS 0.84%) biggest rival in Central Florida. Comcast's (CMCSA 0.28%) Universal Orlando revealed on Monday that it will be adding a new family-friendly ride to its Islands of Adventure theme park.

The new "coaster experience" will be the latest addition to its resort-reinvigorating Harry Potter-themed attractions. Comcast is aiming for a 2019 opening, which perhaps not so coincidentally is just when Disney's Star Wars Land is set to open a few freeway exits away. A theme-park war has turned into a full-blown arms race. 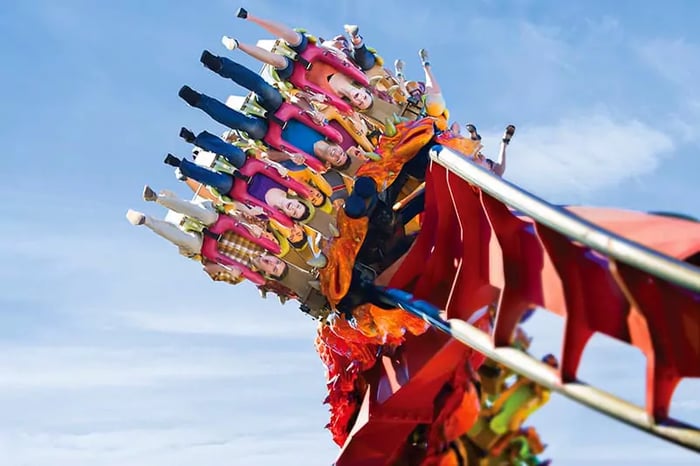 Stop dragon my heart around

It's not all good news for theme-park buffs. Comcast has spent most of the spare land at its existing resort on hotels. Space has become so hard to come by that it couldn't build a dedicated parking lot adjacent to its new water park. Guests have to be shuttled over from the existing parking garage to experience the new watery oasis.

With rare exception, Universal Orlando's additions have come at the expense of existing attractions. The new Potter attraction -- rumored to be a powered coaster ride through the book series' Forbidden Forest, so technically not a roller coaster -- will come at the expense of Dragon Challenge, a popular twin-tracked coaster that's been at the park since its inception. Dragon Challenge will close after the Labor Day extended holiday weekend.

Coaster buffs will cry foul, but even Disney has been known to shutter popular attractions if it thinks a costlier replacement will help drum up turnstile clicks. The problem for Comcast is what will happen between now and 2019. Disney will spend the next four years building out an amazing array of attractions, but there will be a void at Universal Orlando.

Dragon Challenge's two tracks combine for one of the highest hourly capacity rides in all of Central Florida. Nix that people-eater for the next two years, and where will those crowds go? If attendance doesn't decline, it will result in longer lines elsewhere in the resort, and that unfavorable experience will eventually affect its momentum.

The trend has certainly been in Comcast's favor in recent years, according to amusement-park traffic tracker Themed Entertainment Association. Combined attendance at Universal Orlando's two theme parks has risen 91% since bottoming out in 2009, compared with a mere 13% uptick at Disney World's four parks. The unquestionable catalyst for the resort's renaissance is The Wizarding World of Harry Potter that opened in 2010. Adding to that universe with a richly themed ride, at the expense of a coaster that was loosely repositioned to fit into J.K. Rowling's popular series, is an understandable trade-off.

Replacing a wild coaster with a tamer kid-friendly ride, while unsettling to the coaster enthusiast in me that has logged more than 100 rides between the two tracks, is also a sound financial call. Young families have more money to spend on getaways than local thrill-chasing teens do.

If the new ride is a bar-raising experience in two years it will help keep Comcast relevant as it waits until Super Nintendo Land, likely to come in 2021 to combat Disney World's 50th anniversary. Finding ways to keep folks coming between now and then won't be easy, given the limited capacity of Volcano Bay and the lack of buzz being generated for next year's The Fast & The Furious-themed attraction. But Comcast will find a way to fill the void. It's gaining on Disney's market dominance, and there's too much to lose now.