Wabash National Corporation's (NYSE:WNC) second-quarter earnings didn't receive as much Wall Street fanfare as the prior quarter, but its results were a welcome sight nonetheless. Higher revenue from more shipments and lower operating costs helped to offset some pricing weakness. For a business that looked like it had hit the top of the industry cycle a year ago, its results don't reflect that. Here's what happened this past quarter at Wabash. 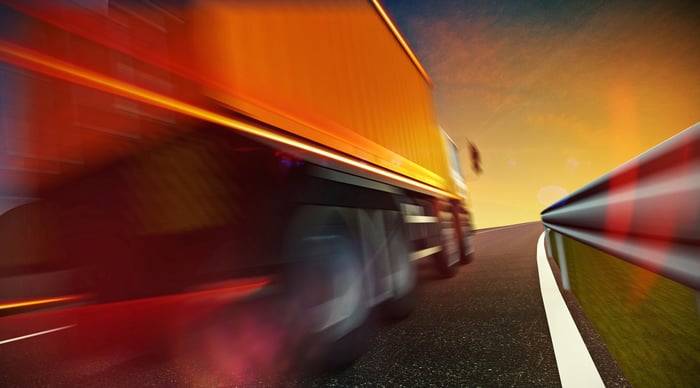 Wabash's second-quarter results don't stack up that well against the same quarter this time last year. That shouldn't be too much of a concern, though, because second-quarter 2016 was the company's best quarter ever. To come within sniffing distance on revenue and still produce decent margins is a rather good result. Trailers sold totaled 14,150 for the quarter, which was enough for management to refine its guidance for the quarter. Wabash now expects total trailer shipments to be between 53,000 and 56,000 versus the prior quarter's guidance -- which was an increase at the time  -- of 50,000 to 56,000.

From an earnings perspective, these results aren't as good, but they are OK. Operating profit margins for the entire business slid from 12.5% this time last year to 8.9%. The biggest contributing factor for the decline in profitability was its diversified product segment, which saw operating margins fall from 11% to 5.6%. Slowing demand from the chemical and energy business coupled with higher commodity prices has put the brakes on this segment for now. That may change as several new petrochemical facilities come on line in the next couple of years. The billions of dollars invested in petrochemical manufacturing will likely have ripple effects through the economy, and tank trailer manufacturers like Wabash should benefit.

That free cash flow result looks a little concerning, but that is a product of timing than weakness in the business. The prior quarter's $64 million in free cash flow was helped immensely by a $32 million drawdown of working capital. This quarter, however, there was a $21 million working capital build. Fluctuations in working capital happen all the time and can have a drastic impact on free cash flow in the short term, but it tends to even out on a year-over-year basis. This shouldn't be too much of a concern going forward.

Management continues to put that cash flow to work for shareholders, as it upped its stock repurchasing. It repurchased $33 million in common stock and convertible senior notes. Over the past several years, Wabash has drastically lowered its total debt outstanding. With all that extra cash freed up, the company has been able to reduce its share count by 11% over the past three years.

While pleased to have delivered another solid quarter overall from a historical perspective, we recognize that we can do even better.  With gross profit margins and operating margins of 15.5 percent and 8.9 percent, respectively, the second quarter represented the second strongest second quarter in our Company's history, only surpassed by the second quarter of last year.  The Commercial Trailer Products team successfully achieved targets in cost management and execution, which is reflected in the segment's continued delivery of strong margins and operating performance.  We continue efforts to drive ongoing productivity improvements throughout the enterprise, accelerating actions to optimize the cost structure and performance of the Diversified Products segment while developing new opportunities to grow our top line and margins.

Backlog totaling $762 million as of June 30, 2017 remains seasonally and historically strong, supporting our long-standing belief that trailer fleet age, regulatory compliance requirements, and customer profitability support a continued favorable demand environment.  Based on all these factors, we are updating our full-year guidance for trailer shipments to 53,000 to 56,000 new trailers, and adjusting our earnings guidance range to $1.44 to $1.50 per diluted share.

Timing the tops and bottoms of industry cycles is tough to predict. Based on the last few earnings results from Wabash, it looks as though the truck trailer market is somewhere near the top or is at some plateau. Sales remain strong today, but they are a pretty clear retreat from 2016 results.

Even if the market is set to decline, Wabash appears to be in good shape. With only $10 million in net debt (debt minus cash) and a more diversified product suite than just dry vans, investors can feel pretty good about this investment right now.