It's east coast versus west coast in the battle of the burgers. One tiny variable is all that really differentiates them.

It's never been easier to get a great burger at your corner chain. While Shake Shack (SHAK 1.88%) and Habit Restaurants (HABT) -- parent of Habit Burger Grill -- are still both very young companies with small footprints, they both aspire to hold solid niches across the country in the coming decade. They want to be the ones serving you your burgers.

But the restaurant business can be brutal: there's nothing one outfit can offer that another can't immediately copy. That's what makes these two chains so unique -- they experienced enough success to become publicly traded entities and start rapid expansion. 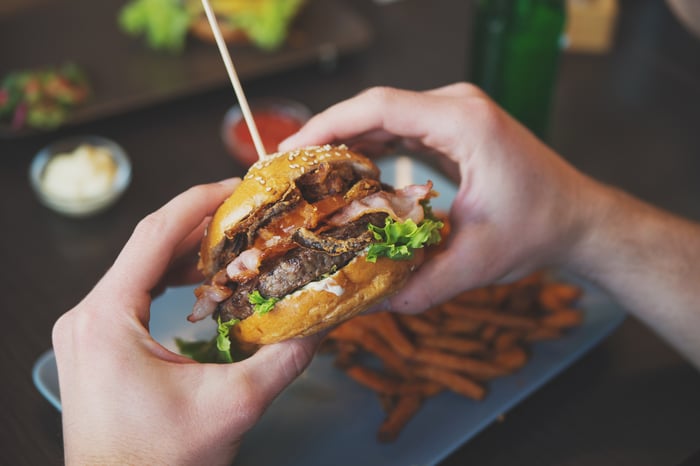 So which stock is the better buy today? That's impossible to answer with 100% certainty. But we can get a better idea for what we get when we buy shares by evaluating these companies on three different continuums. Let's see how they stack up.

There's nothing more important to restaurants than scale and brand power -- as I mentioned above, there's nothing to prevent one chain from out-and-out copying exactly what another chain does. By having a large scale, management can squeeze out more profitability. It can also create more brand awareness, which is the other key differentiator when it comes to restaurant chains. People like to know what they're getting before deciding on a restaurant, and the strength of a brand plays into that decision.

Shake Shack made its name in New York City, while Habit spent most of its life as a family run outfit in California. The former currently has 127 "Shacks" open, while the latter has 178 locations up and running. That means they are more or less on the same scale right now.

When it comes to brand value, it is difficult to differentiate between the two: because they are both so small, most major brand evaluators overlook them. So I'll move to a critical restaurant industry metric to see which has more momentum going its way right now: same store sales. Here's how they compare.

There's simply not enough difference between these two for me to definitively say that one brand is stronger than another.

While investors might like to see management continually pour cash back into growth opportunities at these fledgling companies, there's something to be said for keeping a pile of cash on hand.

That's because every company, at one point or another, is going to face difficult economic times. In the case of Shake Shack and Habit, without that cash the stores could be in serious jeopardy of going bankrupt in a downturn.

Keeping that mind, and remembering that Shake Shack is valued at just over twice the size of Habit Burger, here's where they stand in terms of financial fortitude.

Once again, these two are virtually identical. While Shake Shack is generating more income, Habit was the one actually putting more cash in its pocket (free cash flow) over the past twelve months. And both are in good shape, with no long-term debt to speak of.

Both companies are very expensive on earnings free-cash-flow and growth (PEG Ratio) bases. But because the earnings and free cash flow at both are held down by their aspirations to build new locations, these metrics aren't the most reliable.

The one that is, however, is price-to-sales. And on that metric, habit appears to be trading for a 55% discount to Shake Shack. That's enough of a differentiator for me to declare a winner.

So there you have it: these two burger shops are very similar in a number of ways: size, financial fortitude, and moats. Even when it comes to valuation, they are neck-and-neck. But with a significantly lower price-to-sales ratio, I'm giving the edge here to Habit Burger.