It's been a long time since homebuilders have been viewed as a great investment, but it's looking more and more like this is an industry with some room to run. Case in point: D.R. Horton's (NYSE:DHI) most recent quarterly earnings report. Not only did the company get to enjoy the spoils of the growing housing market like its peers have, but America's largest homebuilder also completed a major acquisition that should help accelerate growth over the next several quarters.

Here's a look at D.R. Horton's most recent earnings results. 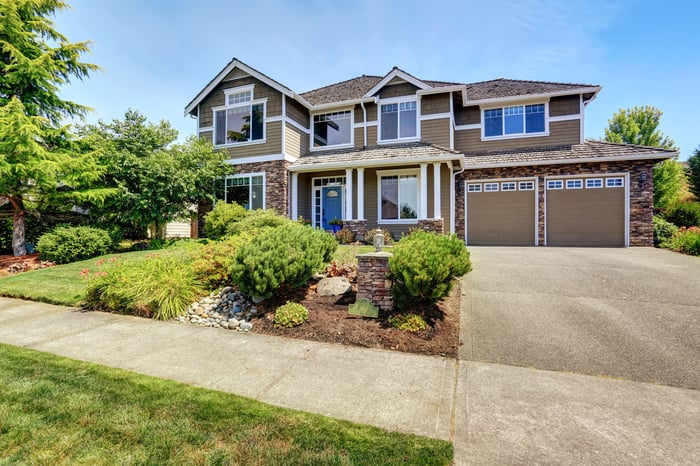 D.R. Horton's fiscal third-quarter results were the product of a few things. One element is the housing market in general, which continues its post-recession recovery. Housing starts in June were 1.21 million on a seasonally adjusted basis, which was up 8% from the prior year. The primary catalyst for this growth are first-time buyers entering the market who have delayed the purchase of a house for some time. This isn't really unique to D.R. Horton, though, as NVR and PulteGroup reported similar things in their recent earnings as well.

More specific to D.R. Horton's success is that the markets in which it operates are doing incredibly well right now. Not only are houses sold up, but the average house price is on the rise as well. Here's a quick look at the growth in homes and market value for its homes closed in the quarter compared to this time last year.

The third element that is boosting the company's bottom line is that management is keeping costs in check. For the quarter, selling, general, and administrative costs as a percentage of revenue declined from 10.4% this time last year to 9.9%. That kind of cost control puts D.R. Horton on the lower end of its peers.

One thing that Wall Street is going to watch closely is the slowing growth in new orders. New orders ticked up 11.3% compared to this time last year. That's the slowest quarter in this fiscal year, but it's well within the range of its peers that have already reported this quarter.

Looking at the rest of the financial statements, it's hard to find much wrong with this report. The company continues to lower its net debt to below $2 billion, and management repurchased $60 million in stock in the quarter. With ample cash coming in the door right now, the company should be able to continue these trends for a while.

The big event for D.R. Horton this past quarter -- aside from the strong housing market -- was the announcement it had won an acquisition battle to purchase 75% of all shares outstanding of real estate company Forestar Group (NYSE:FOR). Back in April, private equity company Starwood Capital and Forestar agreed to a buyout of the entire company for $14.25 per share. Within a couple of weeks, D.R. Horton swept in with an unsolicited offer to buy 75% of shares outstanding for $16.25 in cash. Starwood and D.R. both upped their buyout prices, and D.R. Horton won out with a final offer of $17.75 per share in cash for 75% of the company. D.R. Horton will also sell much of its undeveloped land to Forestar in exchange for some of its developed lots.

Forestar was once a diversified real estate company with community development, timberland and undeveloped land, multifamily residence, and mineral interests scattered around the Southeast, Texas, and Rock Mountains. Over the past year, though, it has sold off many of these assets to focus on its community development land. The real prize for D.R. Horton in this deal is the 5,300 acres of potential community development, but it will also give Forestar a substantial injection of cash to purchase and develop new land. It's hard to imagine the homebuilder not benefiting immensely from having the inside track on new developed lots from a real estate developer.

Here's Chairman Donald R. Horton on the company's most recent results and his expectations for the near future:

For the nine months ended June 30, 2017, our consolidated pre-tax income, homebuilding revenues, and homes closed increased 21%, 18% and 16%, respectively, and our pre-tax profit margin improved 30 basis points to 11.2%. These results reflect the strength of our experienced operational teams, diverse product offerings from our family of brands and solid market conditions across our broad national footprint.

Our balance sheet strength, liquidity and continued earnings growth and cash flow generation are increasing our flexibility, and we plan to maintain our disciplined, opportunistic position to improve the long-term value of our company. We remain focused on growing our revenues and pre-tax profits at a double-digit annual pace while continuing to generate positive annual operating cash flows and improved returns. With 27,600 homes in inventory at the end of June and a robust supply of owned and controlled lots, we are well-positioned for the fourth quarter and fiscal 2018.

It's hard to find much wrong with D.R. Horton's most recent result. New order growth was slower than it has been in recent quarters, but it still grew 11.3%. It's a trend worth watching in the coming quarters, but not really enough to fundamentally change anyone's investment thesis yet.  While its peers are also riding the tide of the housing market, D.R. Horton is getting aggressive with this Forestar Group deal and has ambitious growth plans. How long the company can sustain double-digit growth in a cyclical industry like housing is anyone's guess, but the combination of low unemployment, rising wages, and low interest rates should help push along these results for at least a couple of years.