The big-screen theater specialist had another tough quarter but hopes for long-term success.

IMAX (IMAX 1.69%) has become a key player in the movie-theater industry, with its landmark big-screen experience offering viewers a superior way to see feature films. Yet the company has gone through some tough times lately, in part because of Hollywood's recent failure to keep box-office figures growing more sharply. IMAX's recent layoffs only added fuel to the fire among those who are skeptical about the company's future prospects.

Coming into Wednesday's second-quarter financial report, IMAX investors were prepared for declines on the top and bottom line for the theater company. IMAX's results were mixed, with weaker revenue than expected but slightly better adjusted net income, and the company did its best to emphasize the longer-term strategies it has adopted to try to make itself more profitable and successful. Let's look more closely at IMAX and what its latest results say about the business. 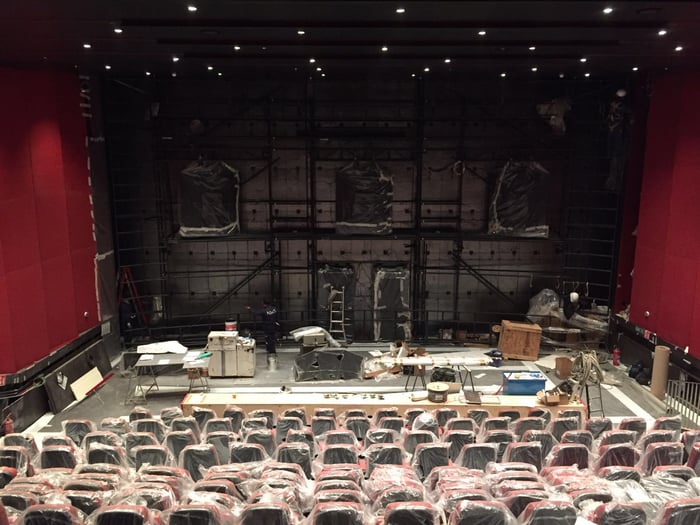 IMAX's second-quarter results didn't reveal any end to the tough conditions facing the industry. Revenue was down 4% to $87.8 million, which was slightly worse than the roughly 3% drop most investors were looking to see. IMAX posted a GAAP net loss of $1.7 million, but after making allowances for extraordinary items, adjusted earnings of $0.15 per share were $0.01 higher than the consensus forecast among those following the stock.

Looking more closely at the report, IMAX continued to highlight the size of its theater network. The theater operator brought in signed agreements for 92 new locations in the second quarter, and it installed 34 theaters during the period, bringing the total number of theaters in the network to 1,257. However, the pace of new signing slowed during the quarter, as IMAX had said in its previous earnings report that it had already brought in 65 locations during the month of April, leaving just 27 in the remaining two months of the period. Nevertheless, IMAX said its backlog of 580 theaters was at an all-time high, leaving it with plenty of future installation business.

IMAX kept dealing with headwinds from an operational standpoint, although conditions weren't quite as bad as investors have seen in past quarters. Gross box office from IMAX titles was actually up about 3% to $268.9 million, but per-screen box office averages were down more than $30,000 to $237,800 per screen. IMAX blamed the drop on poor performance in China, which it said was due to weak content as well as the ramp-up period it sees with newly installed locations. Domestic box office receipts were down 3%, while international locations outside of China were the best performers in the network.

Looking at IMAX's segments, network business revenue was down just slightly during the quarter, falling about 2% on declines in joint revenue-sharing arrangements. The theater-business division posted a 16% drop in segment sales because of slower installation activity.

Can IMAX bounce back?

IMAX CEO Richard Gelfond pointed to actions the company intends to take to bolster its future results. "While growing the network is the most powerful factor in earnings growth long-term," Gelfond said, "we are also implementing strategies aimed at increasing the revenue productivity of our current network while also reducing our cost structure." The CEO pointed to plans to move away from 3-D film showings in North America toward 2-D, for which consumers have shown a clear preference.

IMAX was also pleased about the initial performance of the new movie release Dunkirk, which was shot almost entirely with IMAX-format film cameras. The movie's results will fall into the third quarter, but IMAX said it brought in $19 million in its opening weekend and could help to boost awareness of the IMAX format among moviegoers and filmmakers alike.

Some investors nevertheless seem to have soured on the idea of long-term growth for IMAX. Last month, one analyst noted that poor trends in the industry have had a negative impact on IMAX, and efforts from competing movie theater operators to try to boost the comfort and features of their non-IMAX locations have the potential to take away at least some of the big-screen specialist's business.

IMAX shareholders didn't react strongly to the news, and the stock climbed back to the unchanged mark in after-hours trading following the announcement after a small initial drop. Until Hollywood gets back in top gear, however, IMAX could continue to see difficulty making much progress for its investors.