McCormick & Company (NYSE:MKC) reaffirmed its annual guidance for the year when it recently reported solid second-quarter results. Management believes it can achieve 5% to 7% top-line sales growth on a constant-currency basis in 2017.

One of the areas the company is counting on to boost sales is new consumer products to be introduced in the second half of the year. It's part of McCormick's three-pronged strategy to grow revenue to $5 billion in 2019. (The other two prongs are growth in the company's base products and acquisitions.)

Here is a look at McCormick's robust slate of new consumer products, which features an entrance to a completely new market for the company: breakfast foods. Non-cereal breakfast in the U.S. is a $4 billion market where the company has virtually no sales of significance and a wide open green field of opportunity. 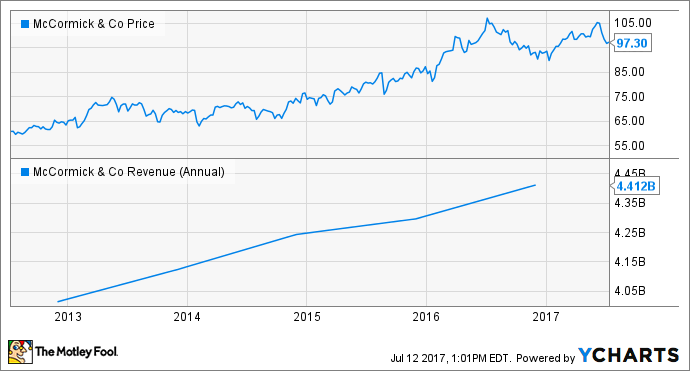 McCormick has not been known for its breakfast fare beyond the spices used to bring a bit of zest to a morning meal. That is all about to change with the introduction of McCormick's new brand Good Morning breakfast products. The new line will include Slow Cooker Breakfast, Breakfast Toppers, Smoothie Boosts, and Breakfast Seasonings.

In an effort to eat more healthful, people are removing a lot of the traditional sugary cereals from their diets. Reducing carbohydrate consumption and increasing protein intake is a trend that has been ongoing in American breakfasts for the past 25 years, according to brand company Stealing Share Incorporated. In 2016 the breakfast cereal market in the United States was $10.6 billion in size. That figure was down 17% from the $12.7 billion seven years earlier. This trend toward healthier eating should be helpful to McCormick's upcoming line of products, which totals 18 new items featuring natural foods with fewer artificial ingredients -- known as "clean label" in the grocery industry.

[W]e are thrilled to extend our presence into the breakfast occasion with the McCormick Good Morning. The breakfast occasion offers a tremendous opportunity to leverage our flavor expertise beyond where McCormick is typically found. Consumers are looking for ways to bring great flavors to today's breakfast tables without all the sugar or artificial ingredients in many of today's products.

The company estimates that breakfast accounts for 17% of all eating occasions. The market intelligence agency Mintel estimates the size of the U.S. market for breakfast foods, including cereal, is over $15 billion in 2017. With McCormick's products participating minimally to date, the new Good Morning brand has a chance to capture market share in a completely new food category for the company. Non-cereal U.S. breakfast food is a $4 billion market opportunity, with the entire category expected to grow at 5% per year.

Today McCormick gets about 40% of total revenue, or $1.76 billion in 2016, from U.S. consumer sales. Although it is too early to tell how much additional revenue this new breakfast product line may bring to the company, in 2016 new products introduced in the past three years accounted for 9% of the company's total $4.4 billion in revenue.

Other than breakfast, there are some other surprises in store for the second half of the year. McCormick has three additions to the U.S. market coming in the form of liquids.

On the gravy front, McCormick will be adding a new line of liquid gravies to its market-dominating powdered-mix offerings. According to Statista, more than 50 million Americans identified the McCormick brand as the most used sauce and gravy in their homes for 2016. The nearest competitor had less than half the number of people identifying its products.

Next are containerized soup products in the form of Simply Asia-branded broth and noodles, as well as Kitchen Basics broths.

Additionally, the company will add some larger package sizes to its repertoire of seasonings to provide more value to its customers.

Food for thought and grounds for further research

I am looking forward to doing some primary research when the products hit store shelves. The lineup sounds quite basic, yet it is an important addition. The Slow Cooker Breakfast has really caught my interest, except I'll be having it for dinner. Which brings up an interesting point: No one says that you have to eat McCormick's Good Morning products in the morning. These new products may add to the company's revenue all day long.