Please ensure Javascript is enabled for purposes of website accessibility
Log In Help Join The Motley Fool
Free Article Join Over 1 Million Premium Members And Get More In-Depth Stock Guidance and Research
By Dan Caplinger - Jul 26, 2017 at 11:13AM

Find out what's behind the big gains for these companies.

Major stock market indexes have kept climbing to record highs over the past month, and investors are more optimistic than ever about their portfolios. A handful of stocks has helped to lead the way higher for the markets, posting huge gains since late June. Among the best performers, Hertz Global Holdings (HTZG.Q), Halcon Resources (HK), and Arena Pharmaceuticals (ARNA) have all soared 60% or more in a month's time, and investors want to know whether they have more room to run higher. 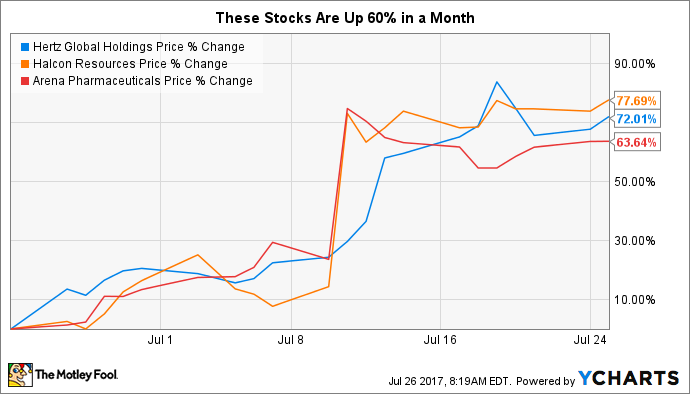 Hertz gives a ride to a key customer

Hertz Global Holdings came into the month on a down note, largely because unfavorable conditions in the used car market threatened the rental-car giant's ability to resell its older fleet vehicles profitably. The company has sought to execute on a turnaround strategy to cut costs internally and react to changing customer behavior in vehicle use, but efforts have taken more time than impatient investors have wanted.

What turned things around for Hertz was news that Apple (AAPL) would work with the car-rental specialist in joint efforts to develop self-driving vehicles, with Apple leasing Lexus RX450h sport utility vehicles from Hertz in order to work on potential solutions. Investors hope that by helping with Apple's Project Titan, Hertz can play a key role in what Apple CEO Tim Cook called "the mother of all [artificial intelligence] projects." It's not known what if any additional benefit Hertz will get if Apple is successful, but Hertz shareholders clearly hope that the rental car company's fleet will get first claim on the self-driving technology when it's available. 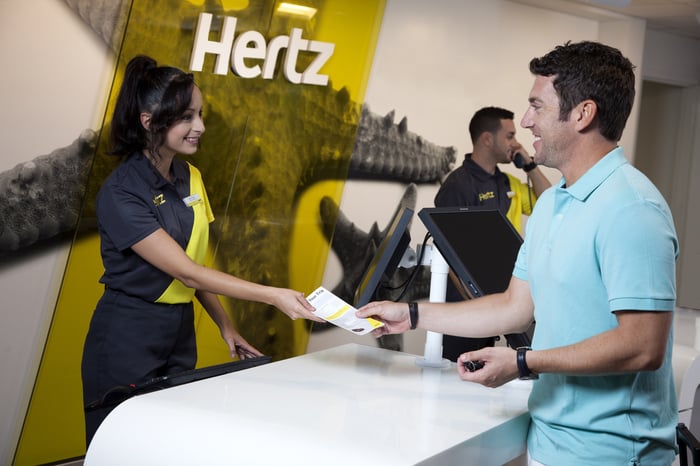 Halcon gets an energy boost

Halcon Resources has gone through the same ups and downs that other players in the energy industry have suffered through so far in 2017. Crude oil prices fell sharply in 2015, rebounded slightly in 2016, but have been fairly weak this year as the industry works through the impact of shale drilling plays. For Halcon, the slump resulted in a bankruptcy proceeding in late 2016 that resulted in shareholders giving up more than 96% of their equity stake to creditors, and since then, the stock has fallen further.

Halcon's big bounce came in early July, when the oil and gas producer said that it would sell all of its assets in North Dakota's Williston Basin area for $1.4 billion. The move marked a huge strategic shift for Halcon, which had historically allowed itself to gather assets in many different areas across the nation. With the sale, Halcon signaled its intent to focus solely on the lucrative Permian Basin area of West Texas, and investors were much more excited about the company's ability to succeed there even despite an upfront decline in oil production that results from the deal. By using the cash to pay off high-interest debt, Halcon will be a more sustainable business going forward.

Arena gets a win

Arena Pharmaceuticals has faced challenges of its own recently. Over the past year, the stock had persistently traded in the $1 to $2 per share range, and it took a 1-for-10 reverse split for Arena to put to rest any concerns about possibly getting delisted from the Nasdaq stock exchange.

Earlier this month, Arena got some good news from its clinical pipeline. The company released study data showing that its experimental drug ralinepag for pulmonary arterial hypertension led to substantial improvement in pulmonary vascular resistance and longer walking distances for patients in a standard six-minute test. Ralinepag will have to go through late-stage clinical trials in order to prove out its encouraging early results, but after a tough period, Arena investors are more enthusiastic than they've been in a long time about the company's ability to get back into growth mode.

Stocks can make big gains in a single month when good things happen to them. If the events that gave each of these stocks their boost pan out as well as hoped, then you could easily see further gains in share prices in the future.