Shares of J.C. Penney Company, Inc. (OTC:JCPN.Q) have gotten hammered this year as the department store chain has posted disappointing quarterly results and fallen alongside the rest of the retail sector.

According to data from S&P Global Market Intelligence, the stock has lost 37% this year, as of July 26. As you can see from the chart below, shares dropped steadily through May with a plunge in January following its holiday season update and then again in May on its first-quarter earnings report. 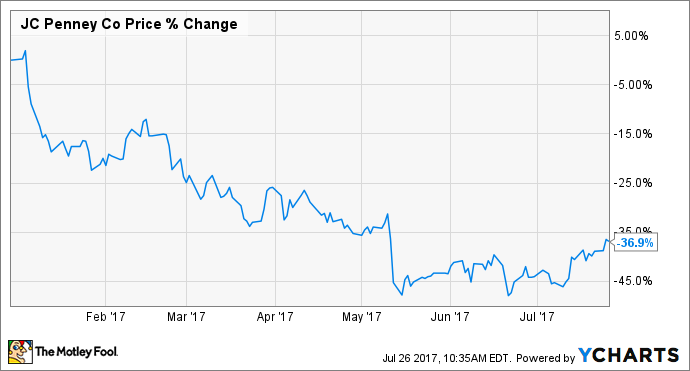 J.C. Penney stock first started falling after rival Macy's reported disappointing holiday sales on Jan. 5, and then dropped when Penney provided its own update. The company said same-store sales declined 0.8% in the nine-week period, below its own guidance, as it said the first first three weeks of November proved to be particularly challenging. The stock lost 17% over four sessions on that news.

The trouble continued when the company reported its complete fourth-quarter results on Feb. 24 and said it would close 130-140 stores as part of a plan to optimize its real estate. Adjusted earnings per share increased from $0.39 to $0.64 in the quarter, which beat estimates, but investors seemed disappointed with 2017 guidance calling for just flat comparable sales. Shares fell 6% on the news.

The stock continued to slide from there and plunged again when the retailer reported first-quarter earnings in May, which included a 3.5% drop in comparable sales. Like other retailers, Penney seemed to be affected by a delay in tax refunds and missed estimates on comparable sales and revenue. Without a bizarre adjustment for a real estate sale, earnings would have also missed expectations. Nonetheless, the company maintained its guidance for the year.

J.C. Penney has now missed its own comparable sales guidance for three straight quarters, a sign its turnaround plan is not progressing as hoped, despite moves like launching appliances and adding new Sephora stores. Still, the stock has become so cheap, hitting all-time lows this year, that it has rebounded modestly since the last earnings report as news from Target and others indicates the retail sector may be bouncing back.

The stock's slide this year shows investors are losing patience with the turnaround. If Penney can't stabilize comparable sales and show real profit growth, the stock will resume its descent.

Why J.C. Penney Company, Inc. Stock Is Down 37% This Year @themotleyfool #stocks $JCPN.Q Next Article
Current