Brian Feroldi, Reuben Gregg Brewer, and Keith Noonan
(TMFTypeoh)
Author Bio
Brian Feroldi has been covering the healthcare and technology industries for The Motley Fool since 2015. Brian's investing strategy is to buy high-quality companies and then let compounding work its magic. See all of his articles here. Follow @brianferoldi
Follow @brianferoldi

Becoming a member of the elite group of companies that can call themselves Dividend Aristocrats isn't easy. Making it on to this elite list requires a company to become a member of the S&P 500 index and to have increased its dividend annually for at least the past 25 consecutive years. It takes a special business to be able to check both of those boxes. That's why we Fools think buying Dividend Aristocrats and holding them for the long term can be a great way to invest.

So which Dividend Aristocrats do we think are smart buys right now? We asked that question to a team of investors, and they picked Sysco Corporation (NYSE:SYY), PepsiCo (NASDAQ:PEP), and McCormick (NYSE:MKC). 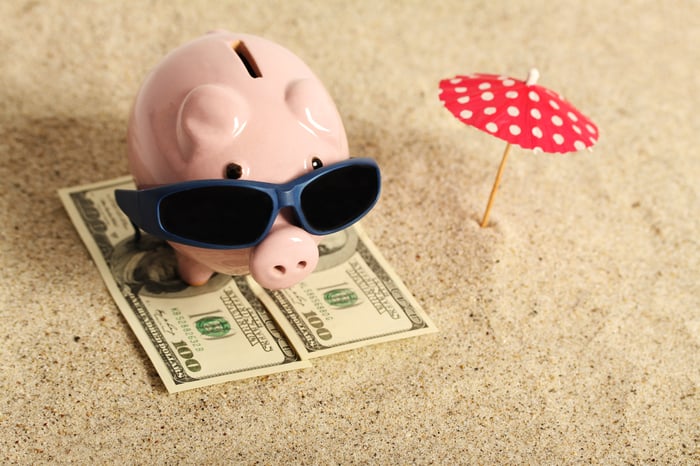 Reuben Gregg Brewer (Sysco Corporation): I think one of the most interesting retail stories today involves how consumers are increasingly getting groceries delivered directly to their homes. That's been happening in the food-service space for a very long time, and Sysco is one of the largest players in the industry, serving restaurants, schools, hotels, and hospitals, among many other customers.

The problem is that selling food is a low-margin business. That creates headwinds for companies trying to build consumer-oriented businesses, but large, institutionally focused companies such as Sysco already have the scale and infrastructure in place to turn a profit despite low margins. To give you an idea of Sysco's reach, it operates throughout North America and recently bought a large European food distributor. And it's been able to improve its margin through efforts such as cost management and a focus on branded products in recent quarters after hitting a low point in 2015. 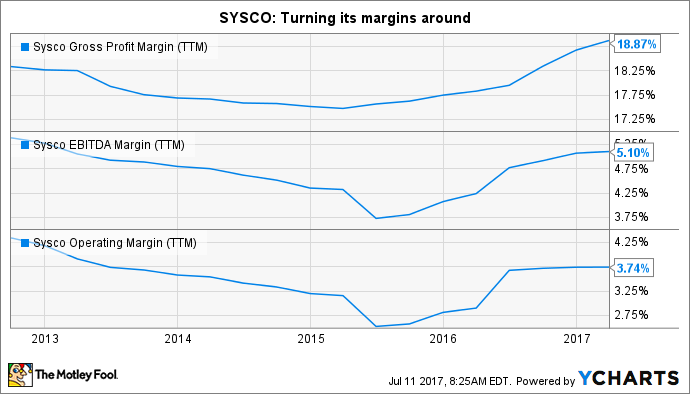 Moreover, the food-distribution industry is fairly fragmented, so Sysco can continue to expand through bolt-on deals. Sysco can then pull costs out of the acquired businesses as it integrates them into its well-oil operations. In fact, that's the basic model that's allowed Sysco to increase its dividend for 47 consecutive years. And since large food-service organizations can't exactly run to the local grocery store to pick up their ingredients, I expect Sysco to keep using that playbook for years to come.

Don't expect Sysco to suddenly turn into a growth stock. However, slow and steady looks highly likely. With its renewed focus on improving margin, long-term investors would be well served by taking a deep dive here.

A snack and beverage standout

Keith Noonan (PepsiCo): Food and beverage giant PepsiCo is a well-known favorite among income investors, and for good reason. The company has consistently delivered market-beating returns and payout growth, and it continues to have the makings of a top dividend stock to own for the long haul.

PepsiCo has a 45-year history of annual payout increases, sports a solid 2.8% yield, and has raised its dividend at an average annual rate of 8.3% over the past five years. Even more importantly, the company's business strengths position it to be able to continue delivering dividend growth and capital appreciation down the line. Soda sales may be facing some pressure in the domestic market as consumers opt for healthier options, but Pepsi seems to be doing a good job of adapting to shifting tastes in beverages -- and it also has its Frito Lay snack segment to drive growth going forward.

With regard to moat, PepsiCo's infrastructure advantages help it produce goods at lower costs than those of its smaller competitors can manage, and its collection of powerful brands should help it continue to exercise pricing strength down the line. Combine these advantages with the company's potential for international growth and ongoing cost savings thanks to automation and other initiatives, and the company still has avenues to meaningful earnings growth.

Between its top-notch returned income profile and a great underlying business, PepsiCo is a standout even among Dividend Aristocrat stocks. It's the type of stock that investors can buy and hold for a lifetime.

Brian Feroldi (McCormick): McCormick is known for its spices, but the company's stock-price movements are usually about as bland as they get. McCormick's business, after all, is normally quite predictable, since the demand for spices, seasonings, condiments, and other flavor products doesn't vary much from year to year. Since McCormick has been the dominant player in the spice market for years, its financial statements generally move in the right direction over time. That's why the company has been able to raise its dividend for 30 years in a row.

However, shareholders were thrown a bit of a curve ball when McCormick announced that it was going to spend $4.2 billion to acquire Reckitt Benckiser Group's food division. This acquisition includes a number of brands you probably know: French's mustard, Frank's RedHot, and Cattlemen's BBQ Sauce, to name a few. McCormick argued that this transaction will instantly make the company a leader in a number of key flavor categories and meaningfully increase its growth prospects. What's more, management expects that this deal will push the company's top line over the $5 billion mark and will be accretive to its earnings in just one year.

While this deal sounds like a winner on the surface, Wall Street was less than thrilled with the news. McCormick's shares fell by more than 5% on the day following the announcement, which shows investors are skeptical. And that makes sense, since the deal will require McCormick to issue $3.7 billion in new debt and to sell $500 million in common stock. Those are big numbers for a company sporting a market cap of around $11.6 billion.

There's no doubt this is a big bet for McCormick to make, but I think the odds are good that things will work out well for shareholders. McCormick knows a thing or two about selling food products and it has a huge geographic footprint, so I think it's more than capable of making the integration work. I also like that the company plans on focusing its financial resources on paying down its debt over the coming years. That move should help de-risk its balance sheet over time. Finally, this deal should enable the company's margin and profit to grow meaningfully in the years ahead.

In all, McCormick still looks like the same steady-eddy investment it's been for decades. Buying this dividend aristocrat while it's out of favor with Wall Street makes a whole lot of sense to me.