The transaction processing and remittances giant raked in growth from its ATM network over the last three months.

Transactions-specialist Euronet Worldwide (EEFT -0.89%) reported double-digit top-line growth in the second quarter of 2017 when it filed earnings on July 25th. We'll delve into highlights of the quarter after first reviewing key earnings numbers directly below: 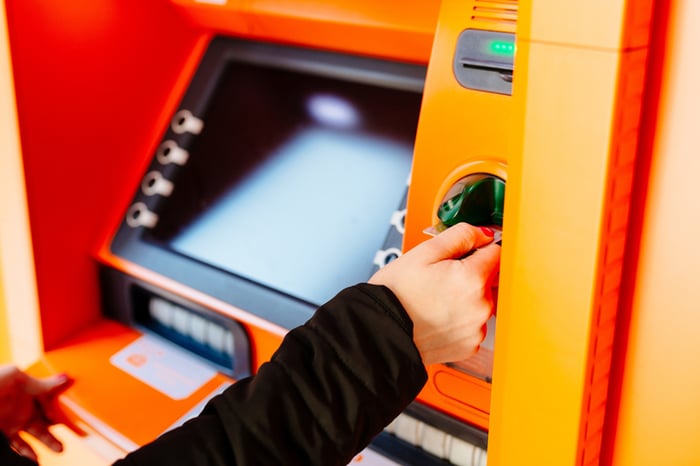 The current quarter was notable for the surge in EFT Processing revenue. During the company's conference call with analysts on July 25th, CFO Rick Weller explained in detail how the company's strategy goes beyond adding units across promising markets like Europe, in brute force:

...Sure, we get more machines out there. But as we continue to layer more of those products in there, we've talked about things like having cardless-based ATM cash withdrawals, depository transactions, lottery or promotional payout type of transactions. And these are all very high-value, rich margin type of transactions. And it just makes our ATMs more attractive to the banks and to other parties as the place to go. So yes, it is units, but it's getting more and more and more product on there. And we're capable -- we can do that because we run the ATMs with our own software, both in our back office as well as at the ATM. So it's a combination of getting the machines out there and getting the products on the machine.

Euronet doesn't provide detailed earnings guidance each quarter. However, the company does publish an adjusted earnings per share (EPS) estimate, which is expected for the third quarter to land at approximately $1.60. This reflects management's confidence in current-year strength, as hitting this target would represent an adjusted EPS improvement of almost 19%.

What to Expect When Euronet Worldwide Reports Earnings
397%