During Euronet's earnings conference call, management discussed both opportunities and temporary challenges in the company's three major business segments. Let's zero in on one key observation per division made by executives to illuminate both the current quarter and conditions for further expansion in the quarters ahead.

Above, CFO Rick Weller discusses one of the pillars of Euronet's business: its consistent expansion of both ATMs and total transactions within the EFT processing segment. The company has increased its ATM base at a year-over-year rate of 10% for the last several quarters.

Euronet is supplementing its traditional ATM operating business by focusing on the outsourcing market. As CEO Mike Brown observed on the earnings call, banks are under pressure to close branches, which incentivizes them to utilize third-party ATM providers. EFT processing added 1,000 outsourced ATMs to its network late in the second quarter through new agreements with banks in Asia. (For context, the company ended the quarter with more than 46,000 ATMs worldwide.) Outsourcing is a rather fast and easy way for Euronet to bulk up its transaction network and tack on incremental revenue and profit.

Management also noted that fee surcharges, common in the U.S., may gradually take hold in Europe. Greece recently allowed its banks to introduce a 2 to 3 euro surcharge for nonbank ATM customers per transaction. The surcharge is essentially a commission a bank charges for the use of its infrastructure by nonaffiliated customers. As surcharges spread, Euronet will garner a slice of banks' commissions on transactions processed through its outsourced ATMs. 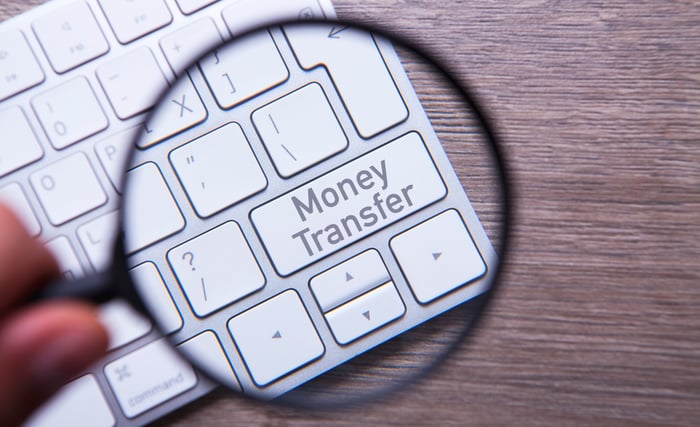 During the quarter, we worked closely with Microsoft to launch their new flagship store in London. Our connection to Microsoft for the distribution of their digital media products allowed us to quickly bring live content in their store in the closed-loop technology we developed for other purposes, [and] allowed us to quickly resolve a problem they faced for returns and rebates inside the store.
-- CEO Mike Brown

But perhaps overlooked by shareholders is epay's potential as a payments facilitator. CEO Brown revealed that epay received a request last quarter from major German drugstore chain client DM to enable Alibaba's Alipay on DM's thousands of retail point-of-sale devices. epay fulfilled the request and turned on Alipay functionality -- in three days. This integration at unheard-of speed is but one example of Euronet's payments integration capabilities, which will undoubtedly figure more prominently in its business narrative -- and bottom-line figures -- over the next several quarters.

[In] the Money Transfer segment, total transactions grew 7% and money transfers grew at 8%. This growth was the result of exceptional double-digit growth from our international remittance business and digital remittances, partially constrained by limited growth from our XE business stemming from Brexit uncertainties, and declines in our domestic transactions as a result of additional ID requirements at Walmart.

While we have seen some softness in domestic transactions, we are confident in our relationship with Walmart as evidenced by the previously announced domestic payout agreement with Walmart and our partnership with Walmart Massmart in South Africa. We optimistically look forward to new products in the future.
-- CFO Rick Weller

Money Transfer's subsidiary, Ria, has powered the segment's growth over the last three years through its agreement to provide money remittance services to Walmart's customers. The second quarter's mid-single-digit growth in transactions and transfers resulted in just 6% year-over-year expansion in money transfer's revenue. That's a significant deceleration from the mid-teens top-line growth the segment usually generates in the busy second quarter.

Management explained during the call that the additional ID requirements imposed by Walmart crimped U.S. transactions volume during the quarter. Interestingly, the requirements weren't the result of any regulatory changes. Rather, Walmart wanted to utilize the level of transaction verification formerly requested by its legacy money transfer vendor (which Ria displaced).

As CEO Brown explained, Euronet worked proactively with Walmart to implement the stricter ID requirements, even as it resulted in fewer transactions, under the principle that "If it's important to Walmart, it's important to us."

It's difficult to discern whether money transfer's transactions will remain depressed or if customers will eventually get used to Walmart's more stringent compliance procedures and resume remittances and other transfers at their former frequencies.

Nonetheless, the company has a host of opportunities, within both money transfer and its sister segments, to make up for this lost volume if needed. Going forward, savvy shareholders will likely skip straight to money transfer's revenue performance and volume figures for a quick status check when Euronet next releases earnings in late October.