ATM transactions, remittances, and digital media resale giant Euronet Worldwide (NASDAQ:EEFT) revealed solid results in each of its major segments in its second-quarter 2019 earnings scorecard, issued before the markets opened on Wednesday. The company also managed double-digit top-line growth and posted adjusted earnings per share of $1.69, meeting its own projected earnings target to the penny.

After a scorching 60% year-to-date rise in Euronet shares, investors appeared to indulge in a bit of profit-taking following the healthy if not record-breaking report: Shares opened down in Wednesday's trading session. As we discuss details from the quarter below, note that all comparable numbers refer to the prior-year quarter.

The company's electronic funds transfer (EFT) processing segment booked a top-line increase of 19% to $232 million, while operating income jumped 45% to $76.5 million. As I explained in my earnings preview, EFT processing has grown in previous quarters by expanding both ATM unit counts and total transactions processed by low-double-digit figures. Indeed, in the second quarter, total ATMs expanded by 13% year over year to 46,636 units at quarter-end, while total transactions increased by 11%. In addition, management observed that Euronet's expansion of Visa's dynamic currency conversion processing to its ATMs worldwide contributed to revenue and operating income growth over the last three months.

Euronet's epay segment pushed revenue higher by 11%, to $184 million, and notched an 8% expansion in operating income, to $17.6 million. Management cited epay's digital media business as a factor behind the top- and bottom-line growth. The total number of transactions processed in this segment leapt by 40% to 369 million, due to higher activity levels in Europe and strength in India, including a surge in lower-margin mobile prepaid airtime top-up sales. 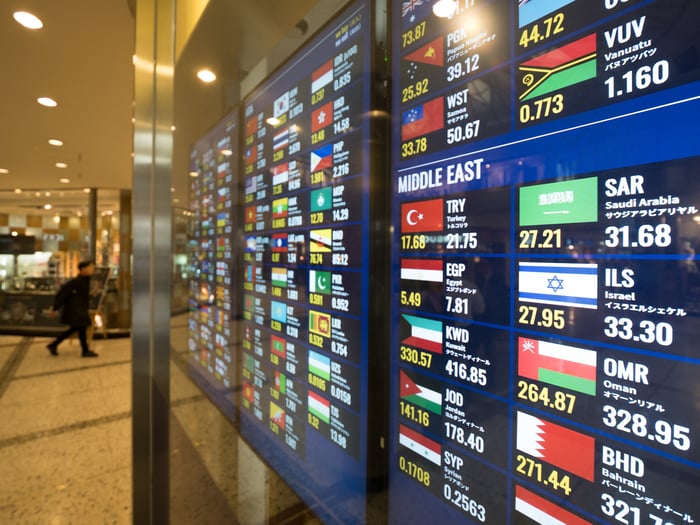 The second quarter posed a tough comparison against the prior-year period for Euronet's money transfer segment. In the second quarter of 2018, sales jumped 21% and operating income grew by 31%. Even after taking this into account, the current quarter's results revealed more moderate growth than investors may have expected. Revenue advanced by 6% to $277 million, and operating income widened by 8% to $35 million. Management noted that the segment's core remittance services enjoyed a strong performance. However, a decline in the XE currency exchange business attributed to Brexit uncertainty, coupled with a drop in U.S. domestic transfers due to stricter ID requirements, impinged on the division's growth.

Euronet's operating margin climbed by 250 basis points to 17%, courtesy of its top-line momentum. Higher operating income combined with a $21 million positive swing in foreign currency losses against the prior year to power the ample net earnings advance shown in the table above.

In Euronet's earnings press release, CEO Mike Brown pointed out the balance in earnings, with credible contributions from all three business lines. This is a fairly recent development following the resumption of growth in the epay segment over the last few quarters:

Our efforts to expand our network, state-of-the-art technology and broad product portfolio continue to result in strong double-digit earnings growth -- including adjusted earnings per share of $1.69 for the second quarter, a 28% year-over-year increase. This strong growth includes double-digit constant currency earnings growth from all three segments. EFT continued to benefit from new ATM and product deployments. Money transfer delivered a solid quarter with continued success in both the physical and digital channels. And, epay continued to benefit from expansion of digital media products.

It's likely that higher revenue and operating income in money transfer -- Euronet's largest segment -- would have pushed EPS beyond management's $1.69 target for the second quarter. However, the company still expects brisk growth in the current period from its triumvirate of business divisions. Euronet provided its customary, single-item outlook on Wednesday in the form of projected third-quarter adjusted EPS, which is pegged at $2.80. Hitting this metric will represent an improvement of roughly 30% over the $2.16 in adjusted EPS that Euronet procured in the third quarter of 2018.