Thanks to a more stable oil market, National Oilwell Varco (NYSE:NOV) posted a slight improvement in its second-quarter results. Revenue came in at $1.76 billion, which was 1% higher than the first quarter and up 2% from the second quarter of last year. That said, the company reported an adjusted loss of $54 million, or $0.14 per share, though that was an improvement both from last quarter and year over year. Overall, the quarter was about as expected. 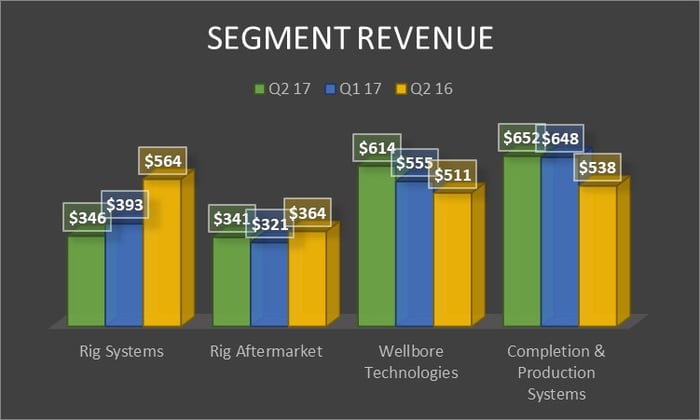 The lone laggard was the rig-systems segment, where revenue slumped another 12% from last quarter, which was a deeper drop than the 5% to 10% decline the company guided for on last quarter's conference call. One of the issues was that revenue out of the backlog only came in at $224 million, which was below the $260 million it anticipated because customers deferred some capital-equipment deliveries until the third quarter. Meanwhile, new order bookings were only $124 million during the quarter, though that was up from $118 million last quarter, due, in part, to one land-rig order.

Revenue in the rig-aftermarket segment bottomed out, as expected. In fact, it rose 6%, which was ahead of the guidance that it would "increase slightly," thanks to growing demand for spare parts, service, and repair support. Meanwhile, wellbore-technologies revenue was also stronger than expected, rising 11%, which was above the "5% to 7% top-line growth" the company anticipated. Fueling this result was robust U.S. activity growth and a modest improvement in many of its international markets.

Finally, the completion and production systems segment matched expectations that revenue would "pick up slightly" by delivering a 1% sales increase, as improving land-based operations offset declines in its offshore businesses. Meanwhile, on a more positive note, National Oilwell Varco secured $501 million of new completion and production systems orders during the quarter against $393 million of orders shipped out of the backlog. That represented a book-to-bill ratio of 127%, which means the company more than replaced its backlog -- which suggests higher revenue in the future. Further, the new orders were much higher than last quarter when it only booked $323 million in new orders. 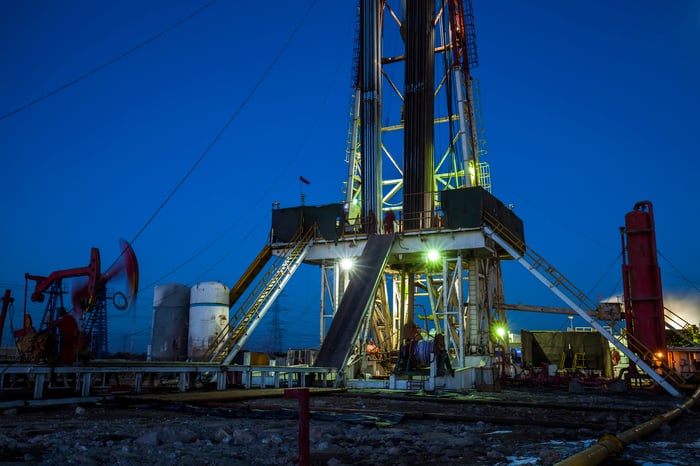 CEO Clay Williams seemed very pleased with the company's results. He stated in the press release that "our team executed exceptionally well during the second quarter, driving substantial sequential improvements in adjusted EBITDA and free cash flow, as we continue to navigate a challenging market." Cash-flow generation was particularly robust, at $168 million, up from $111 million last quarter. That boosted the company's cash position up to $1.53 billion against just $3.21 billion in debt, giving it ample financial flexibility for what lies ahead.

That said, as pleased as Williams was with the quarter, he's even more excited for what lies ahead. He pointed out that:

Scarcity is returning to the oilfield, and, around the world, customers are steadily exhausting excess stocks of the critical products, equipment and technologies we supply, laying the groundwork for future demand. The strong recovery we've seen thus far in North America, combined with many international markets stabilizing and offshore markets nearing bottom, makes us optimistic in our outlook.

Given that view, demand for National Oilwell Varco's products and services should accelerate in the coming quarters because customers will need to start replacing their aging equipment. Oilfield service giant Halliburton (NYSE:HAL) noted this future need on its second-quarter conference call. CEO Jeff Miller stated that:

We have not invested in our legacy fleet in two-and-a-half years. Prudently managing the health of our fleet is important to maintain the type of service quality and reliability that our customers have come to expect. Therefore, some replacement of equipment will be necessary over time.

That said, the Halliburton CEO also pointed out that it has its own manufacturing center, which is a "powerful competitive differentiator" for the company because it can be "nimble and build equipment when needed with short lead times." However, many of its competitors don't have this advantage, which bodes well for National Oilwell Varco because it should get its share of that business.

As that business starts to develop, it should drive revenue and margins higher, which could put the company back into the black. That expected wave of new equipment orders is fueling the company's budding optimism for what lies ahead.