Old Dominion Freight's second-quarter earnings get a boost as the company posts better results for just about every operating metric.

You're going to have to dig deep to find something wrong with Old Dominion Freight Line's (ODFL -0.11%) second-quarter results. Up and down the income statement and the operating metrics, Old Dominion posted an improvement in every category. Here's a look at the company's most recent results and management's view of how the quarter went. 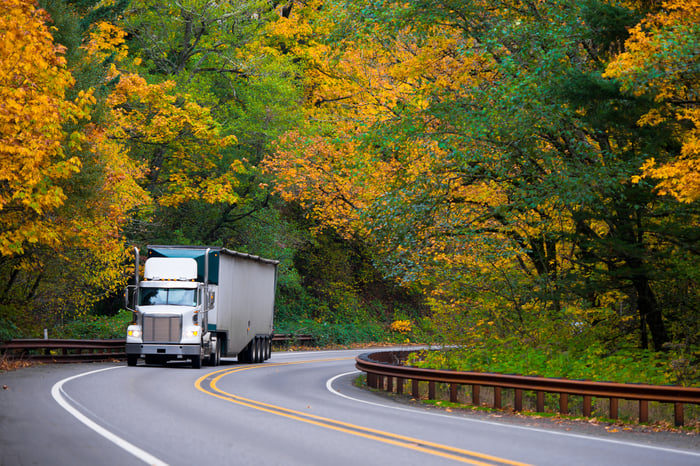 What happened with Old Dominion Freight Line this quarter?

CEO David Congdon's comments on the quarter were deservedly upbeat as he gave details on the increase in revenue:

These were the best growth rates in revenue and earnings per share since our first quarter of 2015. The 11.2% increase in revenue for the second quarter was driven by a 6.1% increase in LTL [less than truckload] tonnage per day and a 5.1% increase in LTL revenue per hundredweight. Excluding fuel surcharges, our LTL revenue per hundredweight increased 3.8%. We believe that the growth in LTL tonnage was attributable to the continued improvement in the domestic economy and the consistent execution of our long-term strategic plan of delivering superior service at a fair price.

The Company's operating ratio in the second quarter of 2017 improved 140 basis points to a new Company record of 80.9%. This improvement was generally due to the leverage created by our accelerated revenue growth, which benefited from increases in both freight density and yield. As a result, most of our operating costs improved as a percent of revenue when compared to the second quarter of 2016.

Old Dominion's second quarter was better than analyst expectations, and several catalysts suggest the company can continue to have success. The steadily growing economy; the rise of online retail, which inevitably lifts all boats in transportation to a certain degree; and the electronic logging device requirement, set to take place at the end of the year, should all lead to even better revenue results from here. With only $12 million in net debt on the balance sheet, Old Dominion Freight could easily fund a significant expansion of its business.

Perhaps the one question mark is how much more the company can expand margins from here. A significant portion of margin expansion came from salaries, wages, and benefits growing at a slower pace than revenue. As unemployment remains low, it will likely put pressure on salaries. But if that is the only concern, then Old Dominion looks like it's in great shape.

These Dividend Stocks Can Double Your Money in Under 5 Years

Why Old Dominion Shares Hit the Fast Lane This Week