The shopping-center REIT made several large acquisitions and reiterated its full-year guidance.

Retail Opportunity Investments' portfolio is growing ever larger. Let's dig deeper to see how the company fared over the past few months, as well as what investors can expect from the company going forward. 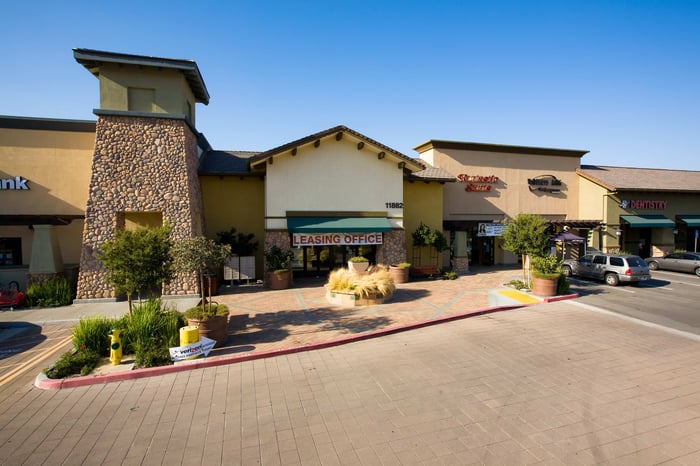 Meanwhile, net income attributable to Retail Opportunity Investments increased 7.9%, to $8.3 million, and remained flat on a per-share basis, at $0.08. But since the company's a REIT, a better way to gauge the success of the business is by looking at funds from operations (FFO), which essentially measures Retail Opportunity Investments' cash flow from operations. To that end, FFO increased 7.5% year over year, to $32.8 million, while FFO per share remained roughly flat at $0.27.

Retail Opportunity Investments has secured a total of $298.4 million in shopping-center acquisitions so far this year, including two shopping centers acquired for a total of $80.4 million in the second quarter. Those acquired properties are:

Retail Opportunity Investments also has contracts to acquire three properties for a total of $126.5 million. One of the properties is Monta Loma Plaza, a 100%-leased, 48,000 square-foot property in Mountain View California, for $30 million.

The other two will be acquired in a single transaction for $96.5 million, of which Retail Opportunity Investments expects to fund roughly $58.8 million with ROIC common stock at roughly $21.25 per share. They are:

Finally, the company has two properties lined up to be sold for a total of $43.5 million, including a shopping center and a land parcel, both of which are slated for new multi-family development.

On the operations front, Retail Opportunity Investments maintained a portfolio lease rate of 97.3% for the quarter, up 10 basis points from last quarter and extending a more than three-year streak above 97%. Same-center net operating income increased 3.6% year over year, to $39 million. Same-space comparable base rent rose 15.1% on 43 new leases totaling 99,922 square feet, and base rent grew 12% on 69 renewed leases totaling 216,593 square feet.

Finally, keeping in mind that, as a REIT, Retail Opportunity Investments is required to return 90% of its income to shareholders in the form of dividends, it maintained its quarterly cash dividend at $0.1875 per share.

The core fundamentals of our business remain strong and we continue to take our portfolio to new heights. During the second quarter, leasing activity continued to accelerate, driving our occupancy and releasing spreads higher. [...] Additionally, we continued to enhance our presence across our key, in-fill markets through our highly disciplined acquisition program. Given our acquisitions year-to-date and ongoing leasing momentum, we are well-positioned to post a strong second half to 2017.

With funds from operations of $0.55 per share through the first two quarters of the year, Retail Opportunity Investments reiterated guidance for full-year 2017 FFO per share of between $1.10 and $1.14, representing year-over-year growth of 1.9% to 5.6% from 2016.

During the subsequent conference call, however, CFO Michael Haines noted that the timing of the close of ROIC's pending acquisitions and their ongoing leasing activity "will no doubt be instrumental in driving our FFO in the second half of the year." As such, management will look to narrow its FFO guidance range in next quarter's call.

In the meantime, there was little not to like about this strong report as Retail Opportunity Investments continued to build its enviable shopping-center portfolio. Long-term investors should be more than pleased with where the company stands today.