Please ensure Javascript is enabled for purposes of website accessibility
Log In Help Join The Motley Fool
Free Article Join Over 1 Million Premium Members And Get More In-Depth Stock Guidance and Research
By Bram Berkowitz - Apr 30, 2020 at 6:00AM

The company appears to have a conservative plan in place, and is well positioned to survive and come out of the global pandemic stronger than before.

Retail Opportunity Investments Corp. (ROIC 1.73%) recently suspended its dividend after reporting a roughly 9% drop in profits in the first quarter of the year. But while it is true that ROIC is invested entirely in retail, a sector that is not expected to perform well in today's world of social distancing, the company appears to be positioned to withstand the current downturn in the economy.

ROIC owns 88 shopping centers, all of which are currently open and heavily centered around grocery and drug stores, businesses that are considered "essential" by the government and that are seeing lots of demand during this time. I think the suspension of the dividend is simply a move by executives to stay conservative as the economy enters a quarter that is expected to see a significant decline in GDP, potentially as much as 40%. 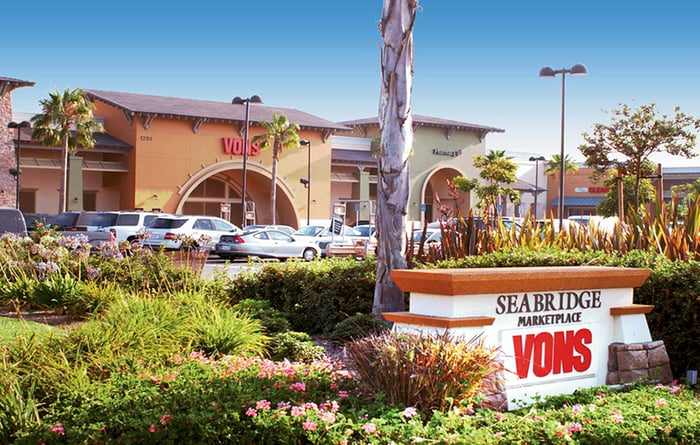 A good portfolio during coronavirus

It's almost as if ROIC was built as a retail company intended to survive the global pandemic. The company is based on the West Coast, which has been able to limit coronavirus cases more than heavily hit states in the Northeast, and most of its tenants are grocery stores and pharmacies.

ROIC's top 10 tenants include six grocers, Rite Aid (RAD 4.44%), and JPMorgan Chase (JPM 1.66%), a company that should be able to continue to pay its rent. In fact, ROIC CEO Stuart Tanz said on the company's recent earnings call that 98% of its portfolio is grocery- and drug-anchored.

The company is not entirely immune to the pandemic because it does have dine-in restaurants and a small group of fitness and entertainment businesses, such as movie theaters, as tenants. But for the most part, grocery and drug stores dominate the company's portfolio. As a result, ROIC has received approximately 68% of its April billed receipts on a cash basis, which, according to the company, is enough to cover its normal monthly average fixed costs including property, operating expenses, general and administrative expenses, and debt service.

Company executives also said on their recent earnings call that they believe there is "a series of tenants that we know can pay rent and have not paid rent," so there could be the potential to collect even more revenue, although May and June are clearly going to be volatile months. ROIC executives added that they don't have any concerns relating to anchor lease expirations for at least another two years.

Obviously, it is never a good sign to see a company completely suspend the dividend, but I think it falls in line with an overall strategy the company is putting in place to stay conservative and very liquid should a prolonged recession occur. ROIC executives say they have now drawn roughly $130 million from the company's lending facility, enough to cover expenses through the remainder of 2020 and all of 2021.

By suspending the dividend, ROIC will save another roughly $23.2 million ($0.20 per share multiplied by almost 116 million weighted-average basic shares outstanding). This all seems like a very conservative approach, considering there are signs that some parts of the economy may open soon and there's hope that a vaccine could be ready by early 2021, but a conservative approach is never a bad thing during a time of such uncertainty.

The company also disclosed that it could draw another $233 million in credit if it really needs to. ROIC also has very little upcoming debt due. Company executives said ROIC has a few small mortgages totaling $23 million that mature in two years, but otherwise have no unsecured debt due for the next four years.

The other positive sign is that the earnings call contained some light chatter about taking advantage of the current climate to grow. Normally, if you are that worried about survival, you aren't focusing on growth, so I see this as a very good sign. After all, ROIC is a company that was born in the depths of the Great Recession in 2009 by seizing on the opportunity it saw in necessity-based community and neighborhood shopping centers.

Tanz said he is seeing some of the same conditions now as seen in the last recession that could turn into acquisition opportunities. The company, according to Tanz, has already been approached by some outside investors, and management will evaluate potential opportunities while keeping liquidity as the priority.

Hang tight for a few months

Given that management appears to be taking a conservative approach to liquidity and is still seeing strong activity from its current tenants in terms of being open and April billings, I see no reason to dump the stock yet. It will be interesting to see if the company reports second-quarter activity among its tenants similar to what it saw in the first quarter.

The key to succeeding during the coronavirus pandemic is to first and foremost survive. Any company that does this is an instant winner, and ROIC seems to have the characteristics to not only survive the pandemic, but potentially come out stronger on the other side.

As for the dividend, company executives said they could see it returning by the third quarter. The company had a payout ratio of close to 70% before suspending the dividend, so one thing to keep in mind is that ROIC could return with a smaller dividend, at least in the beginning, until it feels totally confident that things are headed in the right direction.