Net-lease retail REIT Realty Income Corporation (NYSE:O) reported second-quarter earnings that not only showed impressive revenue and FFO numbers, but gave investors several other reasons to smile as well. While the real estate sector has been a major laggard over the past year or so, Realty Income's long-term thesis appears to be doing just fine.

First, let's take a look at Realty Income's revenue and FFO for the quarter, both of which showed impressive growth. Revenue came in at $300.2 million, a 10.8% year-over-year increase, while the adjusted FFO of $0.76 per share represents a 7% growth rate.

During the quarter, Realty Income announced its 79th quarterly dividend increase in a row, and the stock now pays 6% more on an annualized basis than it did a year ago. Since its 1994 NYSE listing, Realty Income's dividend has grown at a 4.7% annualized rate. 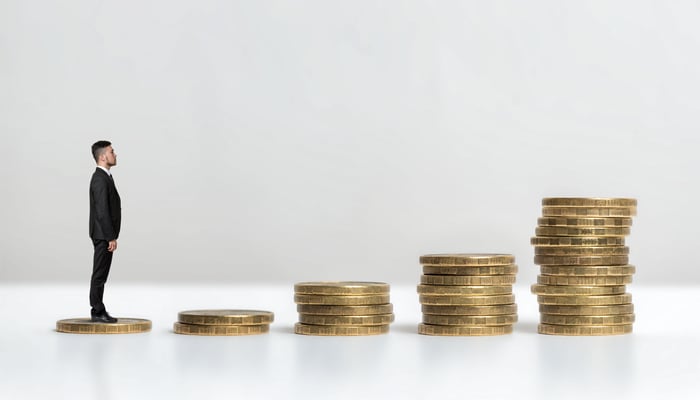 Realty Income's property portfolio grew to more than 5,000 properties for the first time, helped out by $321.2 million in acquisition volume. This follows an impressive first-quarter total of $371 million in investments, and the company is well above the pace it would need to meet its full-year target, which it initially set at $1 billion.

In fact, the company is increasing its full-year acquisition guidance to $1.5 billion. Since the first-half total was just shy of $700 million, this implies that Realty Income is expecting an even more active second half of the year.

In 2016, we saw a similar trend take place. Realty Income started the year with a relatively modest $750 million acquisition guidance, which was subsequently increased in every single quarter, thanks to a lower-than-expected cost of capital and abundance of attractive opportunities. It appears that similar conditions are occurring this year.

Headwinds in the retail industry have investors concerned that occupancy could fall, causing the revenue streams of retail REITs to take a hit. This has certainly been the case for REITs with lots of discretionary and/or luxury retail tenants, but not for Realty Income.

In fact, Realty Income as a whole is doing even better that it has been in recent years, in terms of occupancy. The company ended the quarter with an impressive 98.5% occupancy rate -- the highest level in a decade. What's more, the company not only released 53 properties where leases expired, but managed to recapture 113% of the expiring rental income in the process.

Overall, Realty Income's second quarter was a good one, and as a result, the company is increasing and narrowing its full-year FFO guidance. Management now sees full-year adjusted FFO of $3.03-$3.07, an increase from the prior range of $3.00-$3.06.

Realty Income's business seems to be firing on all cylinders, and I'm having a difficult time finding anything in the company's second-quarter earnings report to complain about. In fact, the only things I worry about when it comes to Realty Income's stock performance are interest rate headwinds and overall retail sector weakness, neither of which are permanent, nor are they within the company's control.

In a nutshell, Realty Income had a fantastic second quarter, and any dip in the share price could be an excellent opportunity to get into one of the best REITs in the sector at a discount.