My top independent oil stock right now isn't ConocoPhillips (NYSE:COP), despite its size and brand recognition. Instead, it's little Apache Corporation (NASDAQ:APA). I think the stock market has unfairly punished Apache for the industry's woes, setting it up to outperform.

Here are three charts to explain why I'm expecting big things from Apache and why you may want to consider it for your portfolio. 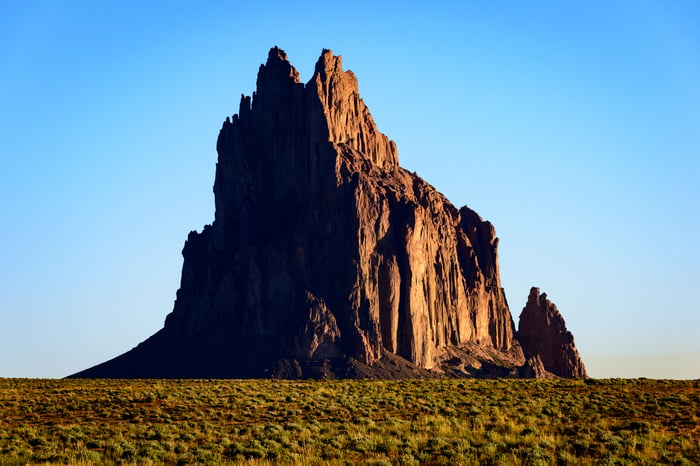 Apache's stock price popped up and then gradually trended back down, much like the silhouette of the famous Shiprock of New Mexico. Image Source: Getty Images.

Apache's stock chart over the past year looks uncannily like the famous Shiprock (pictured above) in the New Mexico desert. In September 2016, the stock popped up into a two-pronged mountain, then gradually slid back down so far in 2017 to hover around the levels it's at today: 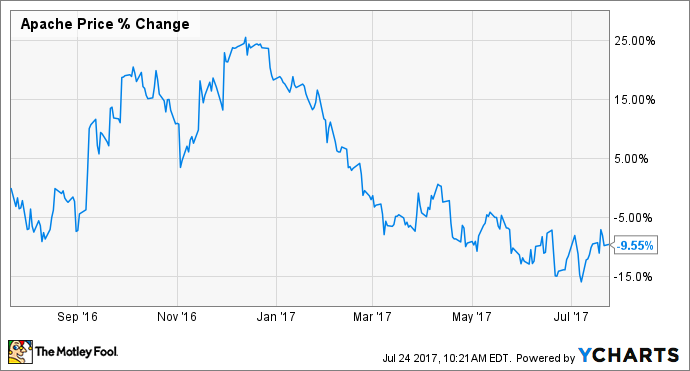 Here's why the chart looks the way it does (unlike the actual Shiprock, erosion isn't the cause): In September 2016, right before the stock's big pop, Apache made a massive discovery of oil and gas beneath land it had purchased on the cheap in West Texas.

This find, dubbed "Alpine High" caused excited investors to immediately bid the stock skyward, anticipating increased production for the company. The production, though, hasn't yet materialized, and gradually the enthusiasm has faded, along with the share price.

The market, though, hasn't been patient and has been selling off the stock, which -- as you can see above -- is currently trading for less than it was before the Alpine High discovery was announced. That means an investor who buys the stock now is essentially getting a piece of Alpine High for free.

If oil prices don't rise significantly -- and they haven't for the last three years -- independent producers like Apache and ConocoPhillips have only a couple of options to improve their bottom lines. They can reduce their expenses so they make more money on each barrel of oil they produce or they can increase production volumes and improve their bottom lines that way. Or both.

Apache is predicting that its production volumes are going to soar in the coming years: 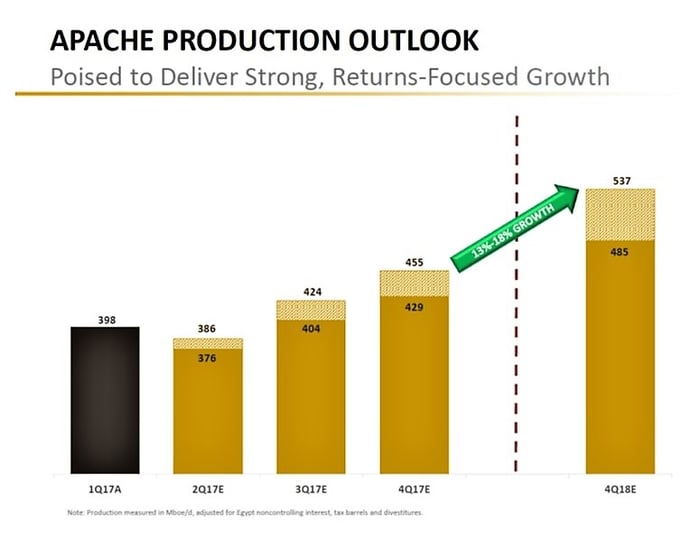 As you can see from the above chart -- which was from a May investor presentation -- Apache is predicting that its adjusted production will decline in the second quarter by 5.5%, before climbing upwards to 429,000 barrels of oil equivalent per day in the fourth quarter, a 7.8% increase over the first quarter and by 21.9% to 485,000 boe/d by the end of 2018.

The second-quarter declines represent scheduled maintenance in the company's North Sea operations as well as the sale of some underperforming Canadian assets. The subsequent gains are expected to come not only from Alpine High but also from the North Sea, where the company is installing a new subsea tieback, and from Egypt, where Apache has just been granted two new land concessions in the country's Western Desert.

Investors should be prepared for a lackluster second quarter, and understand that it's already factored into the company's plans.

By selling those underperforming assets, Apache is looking to achieve higher overall margins as well as improved overall production. Here's what Apache's margins looked like in first-quarter 2017: 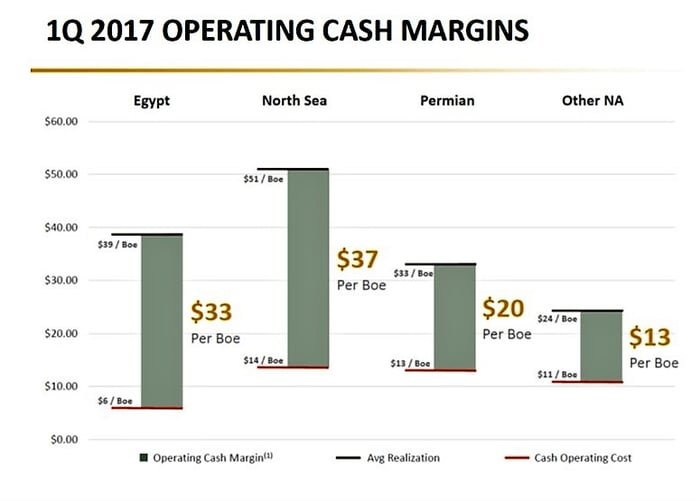 The company's highest margins came from its overseas operations. Margins from its Permian Basin operations -- where Alpine High is located -- were lower, while its other North American margins were woefully behind even that.

However, Apache plans to improve its overall margins by replacing those other North American operations with Permian Basin output. Here are two charts. The first shows Apache's production mix in fourth-quarter 2016, and the second indicates what the company expects in fourth-quarter 2018: 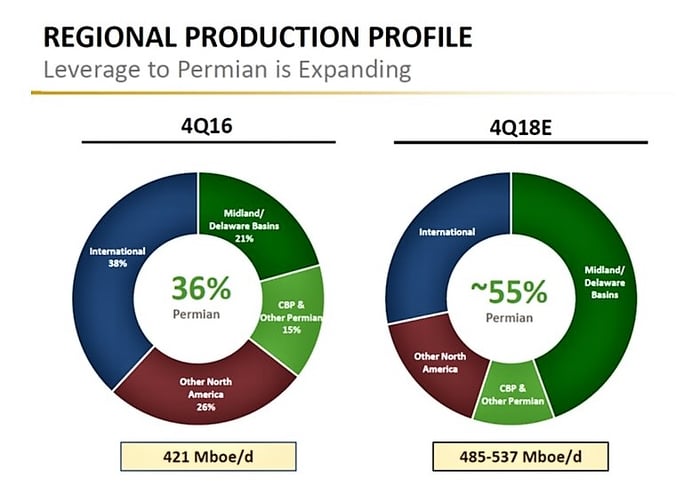 Apache plans to significantly reduce its exposure to non-Permian North America plays -- the ones with the company's worst margins (ConocoPhillips has been employing a similar strategy). Meanwhile, Apache will improve its Midland and Delaware Basin Permian output (Alpine High). One hopes the company might be able to improve its Permian margins as it develops Alpine High, but even if it can't, the company will still end up with a higher-margin asset portfolio and improved production.

That's a winning combo for investors.

It's important to note that all of Apache's predictions about Alpine High are thus far just that: predictions. Alpine High could turn out to be a dud or be far more successful than expected. The good news is -- as these five charts reveal -- the company seems poised for success no matter what happens with Alpine High.

Remember, the stock price is now below its pre-Alpine High level, meaning you can essentially get Alpine High's value for free. And even if Apache's predicted production gains at Alpine High don't materialize, management's investments in high-margin overseas projects coupled with its pivot away from low-margin North American assets should benefit investors, even if oil stays around $50 per barrel.

In my view, that makes Apache a buy.