It's not that uncommon to see a small independent oil and gas producer to post 10% production growth rates. For a massive company like Chevron (NYSE:CVX) to pull off that feat is an entirely different story. Several major capital project start-ups helped push the company's production rates -- and earnings -- higher this quarter, and they helped it get closer to a management target for 2017.

Let's take a look at Chevron's most recent quarterly results as well as examine how it was able to grow production by so much in such a short time. 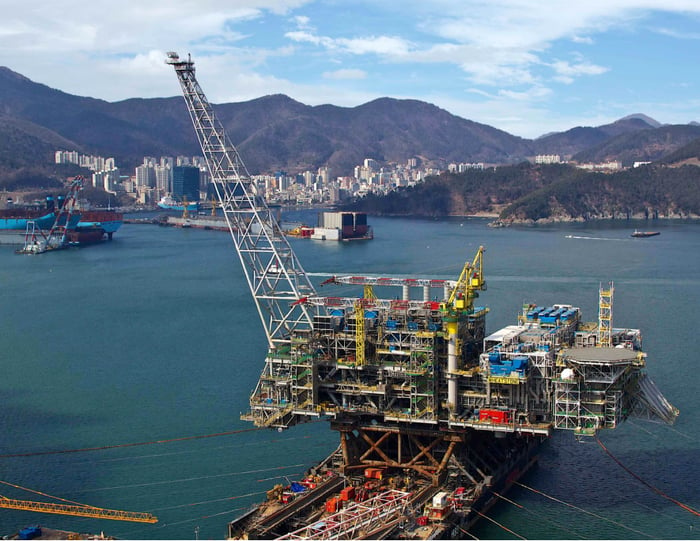 For an integrated oil and gas company, Chevron is heavily weighted toward the production side of the business. So when the company's upstream segment performs well, then you can expect the overall bottom line to reflect that. Even though net income was lower than the prior quarter, most of that related to one-time gains in the first quarter and charges in the second quarter. These items are mostly non-cash events, though, and only impact earnings without changing the physical cash in the business.

Speaking of cash, this is the first quarter in a long time that Chevron was able to cover all of its capital expenditures with cash flow from operations. In fact, it was almost enough to cover capital spending and dividend payments. With Gorgon LNG fully operational and Wheatstone Train 1 complete, capital expenditure requirements have gone down substantially, and those assets are starting to be cash contributors.

Breaking down Chevron's earnings by business segments, the weak point continues to be U.S. Upstream. Part of this is because product realization prices in the U.S. are still low -- Chevron realized an oil price of $41 a barrel in Q2. The other weak point in this report was international downstream earnings that suffered from downtime at its refineries in Thailand and South Africa. 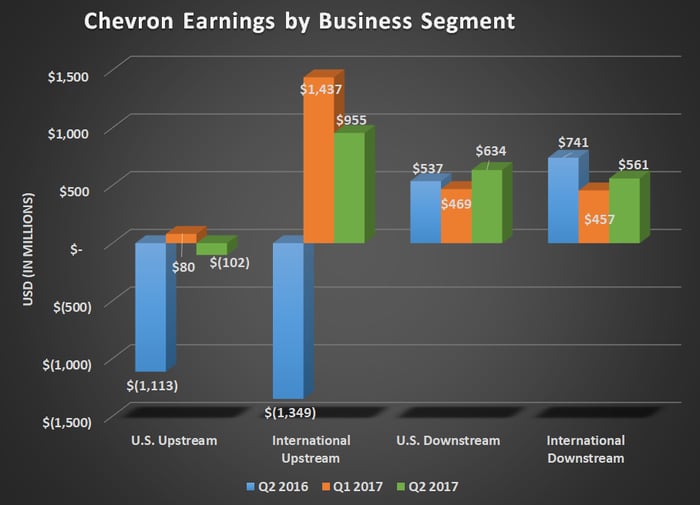 In the company's press release, CEO John Watson's statement discussed both the large bump in production this quarter as well as the significant reductions in spending that should put the company on track to meet that cash flow goal for the year:

Second-quarter results improved substantially from a year ago and year-to-date net cash flow is positive. We're delivering higher production with lower capital and operating expenditures. Oil and gas production was up 10 percent in the second quarter from a year ago. Our Gorgon LNG Project in Australia closed the quarter running above nameplate capacity and we had record production from our shale and tight resource in the Permian Basin. First production from the Wheatstone LNG Project is expected next month. Operating expenses were down 10 percent and capital spending was down 25 percent in the first six months of the year versus 2016.

Chevron is a little late to the cash-flow party compared to some of its peers. It is still winding down spending while others are starting to open up their wallets to take advantage of cheap service contracts and low prices for exploration licenses. With that goal of free cash flow positive by the end of the year in sight, though, Chevron might start to change its tone. With Gorgon on line and Wheatstone set to be fully operational in the next six to eight months, there is a lot more room in the company's capital spending budget. These next few quarters are going to be interesting for Chevron as it charts a new path toward growth again.