Stock indexes were mixed on Friday, with the Dow Jones Industrial Average (DJINDICES:^DJI) setting yet another record high, but the S&P 500 (SNPINDEX:^GSPC) closing lower.

As for individual stocks, shares of Amazon.com (NASDAQ:AMZN) fell a modest amount on lower-than-expected earnings, and those of Starbucks Corporation (NASDAQ:SBUX) took a big hit thanks to a gloomy forecast. 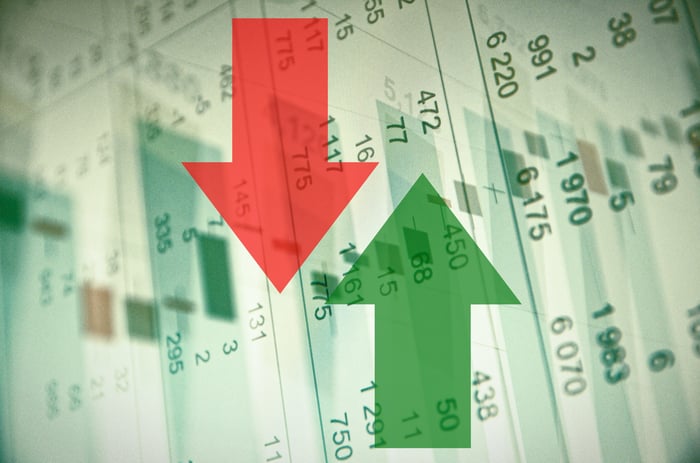 Online retailing juggernaut Amazon reported strong second-quarter sales growth but lower profits than expected last night, and shares fell 2.5% today. Revenue of $38 billion was up 25% from last year and above the top end of guidance given three months ago. Sales growth of 27% in North America stood out as particularly notable, with international sales growing 17%, or 22% excluding currency effects. Earnings per share came in at $0.40 when analysts were expecting $1.42, as the company stepped up investments in growth initiatives.

Operating income of $628 million was within the range of guidance, but fell 51% from the year before. Amazon Web Services had another strong growth quarter, with sales rising 42% despite price cuts and generating $916 million in operating income, more than making up for operating losses in the rest of the business. Growth investments included a 42% increase in head count over last year, with increased spending on fulfillment capacity and logistics services, digital video, Echo and the Alexa platform, India, and the buildup of AWS infrastructure.

The market generally took the huge miss in earnings in stride -- and why not? Amazon has grown to a market capitalization of nearly half a trillion dollars based on a practice of plowing profits back into growth and disrupting traditional retailers in its path. Results for the latest quarter seem to indicate that strategy is still very much on track.

Starbucks investors don't like what it reads in the tea leaves

Global coffee giant Starbucks announced fiscal Q3 results after market close last night that met expectations for earnings but barely missed on the top line, and shares were pummeled 9.2% as a result. Revenue was up 8% to $5.66 billion, with comparable-store sales growth of 4% globally and 5% in the U.S. The company earned $0.55 per share on a non-GAAP basis. Analysts were expecting revenue of $5.75 billion, according to Reuters.

Starbucks also took the opportunity to announce two strategic actions. The company will be taking full ownership of its mainland China stores by buying from its Chinese partner the 50% of their joint venture that it doesn't already own. China is Starbucks' fastest-growing international market, and comparable-store sales there grew 7% last quarter. On the other hand, the company will be closing all 379 Teavana stores, a mall-based chain that has been underperforming expectations.

Despite results that were at least close to expectations, company officials sounded a downbeat note for the rest of the year. In the press release, CFO Scott Maw said, "[D]espite posting record performance in Q3 and further extending our lead compared to the industry overall, the combination of trends in the quarter and ongoing macro pressures impacting the retail and restaurant sectors has us a bit more cautious going into Q4." Management lowered sales and earnings guidance for Q4, based on "choppiness" it is seeing in Q3 and early Q4.

No doubt the impact Amazon and other online retailers are having on mall traffic in the U.S. is hurting Starbucks. Growth in the company's loyalty program has been slowing in recent quarters, too. But for patient investors, the moves to shut down a struggling chain and to double down on China are positive signs. In the short term, however, the market is anticipating some disappointment ahead.