In 2002, Warren Buffett's Berkshire Hathaway (NYSE: BRK-A) (NYSE: BRK-B) purchased Fruit of the Loom out of bankruptcy court for $835 million in cash. With the brand originating in 1851, and reportedly possessing a 33% share of the men's and boy's underwear market at the time, Fruit of the Loom was a playbook Buffett acquisition. The company was in a boring, consumer staples industry while possessing a well-known brand.

The underwear maker still commands a strong share of the market, but it shares its dominance with another participant. Hanesbrands Inc. (NYSE:HBI), which shares a rich history similar to Fruit of the Loom, owns popular brands including Hanes, Playtex, and Champion. According to the company, it owns the No. 1 or No. 2 market-share position in a variety of key categories across the globe, including intimate apparel, socks, and men's underwear. 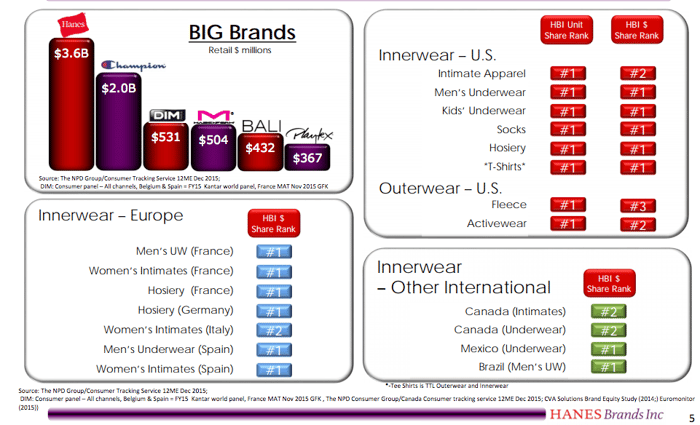 Not only is it Fruit of the Loom's largest competitor, but Hanes also shares some similarities with the business, and not just on the positive side. Like Fruit of the Loom at the turn of the millennium, weaknesses are becoming prevalent in Hanes' business.

In February, Hanes stock was down as much as 45% from its all-time highs reached in April 2015. It has recovered some of those losses since, but is still down 32% from its previous high.  One reason for the drop is the challenging retail environment, which has caused the company to miss Wall Street earnings estimates in three out of the past six quarters. 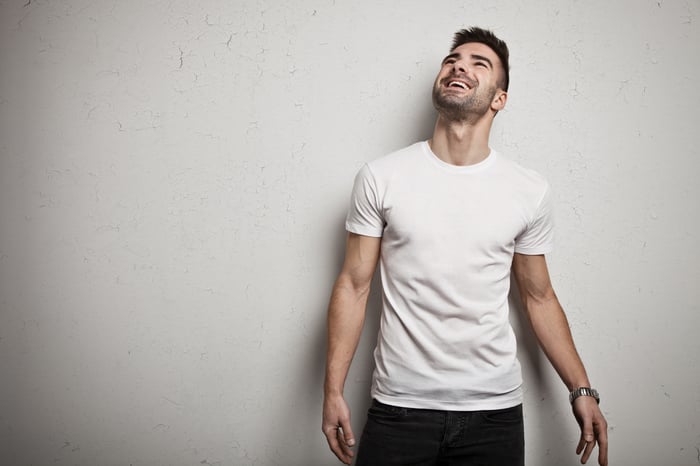 The amount of debt Hanes has taken on is also concerning. Since the end of 2014, Hanesbrands' long-term debt has increased from $1.6 billion to $3.7 billion. Its total debt-to-equity ratio during the same period has gone from 276% to 640%. Rising debt levels can be dangerous as they typically mean higher interest rates, lower debt ratings, and stricter covenants on the debtor. Failure to abide by a debt covenant leads to default, which can have serious negative consequences.  Given its increasing debt levels combined with its inability to beat Wall Street expectations, it's no surprise Hanes stock has been under pressure the past few years. 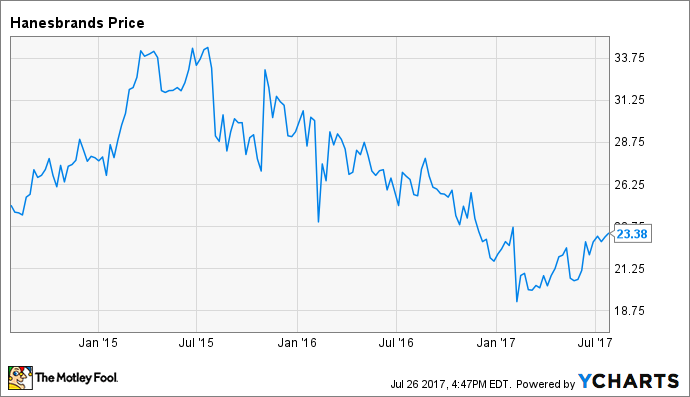 Given Hanes' increasing debt levels, underperforming business, declining stock price, and the fact that it's in the underwear business, I was reminded of Buffett's Fruit of the Loom acquisition 15 years ago.

A brief history of Fruit of the Loom

Large debt levels in part to fund acquisitions proved too much and in December 1999, after reporting a net loss of $576.2 million, the company filed for Chapter 11 bankruptcy protection. Buffett cited chaotic deliveries, soaring costs, and poor relationships with customers. Where Fruit of the Loom's issues drove many away, Buffett saw an opportunity. "We've agreed to buy Fruit of the Loom for two major reasons: the strength of the brand and the managerial talent of John Holland." Holland was brought back by Fruit of the Loom as the chief operating officer to rescue a sinking ship.

Is Hanesbrands at risk of Fruit of the Loom's fate?

While Fruit of the Loom had reported five straight quarterly losses prior to filing for bankruptcy protection, Hanes reported $71 million in net income during the most recent quarter and $530 million in profit over the last 12 months. It has also been able to grow earnings per share and free cash flow 16% and 12% annualized, respectively, over the last five years. Profit margins over the trailing 12 months are also healthy at 8.6% of revenue.

Much of Hanes' increase in debt levels has been to fund acquisitions. In June 2016, Hanes acquired Champion Europe for 220 million euros and a couple days later, acquired Pacific Brands Limited for approximately $800 million. Poor acquisitions often come back to bite many companies (Fruit of the Loom was a perfect example) but Hanesbrands' acquisition strategy, while aggressive, appears to be disciplined. During its 2016 investor day presentation, management noted acquisitions as a key component of its growth strategy. They also highlighted a methodical strategy when making acquisition decisions. In the company's words, its four acquisition criteria are:

Acquisitions that meet the criteria above have generated internal rates of return in the low-to-mid teens after taxes, according to the company.

While Hanesbrands' business is much healthier than Fruit of the Loom's business in the late 1990s, investors should still be aware of the threats that can turn Hanes' prospects for the worst. Poor acquisitions, changing consumer tastes, and moves that destroy its brand are all risks that could make servicing its high debt levels more challenging. Given Hanes' history in making acquisitions work along with lower-than-normal fashion risk in the innerwear space, the chances of any of these risks coming to pass are minimal. However, they are still real.

Acquisitions run the risk of damaging company cultures, but Hanesbrands also purchases businesses with the expectation of synergies. If those synergies don't come to fruition, it will have likely overpaid for the acquisition. This is something the company cannot afford, especially if it is funding the purchase with debt.

Market pessimism has whacked Hanesbrands' stock. Since Berkshire Hathaway already owns a close competitor, an acquisition of Hanes by Buffett is highly unlikely, so investors shouldn't hope for that kind of help. However, if Hanesbrands can achieve synergy targets and turn its acquisitions into successful investments, value investors may have the opportunity to make a purchase of a strong consumer brand at a depressed stock price.