Middleby (NASDAQ:MIDD) may be the best stock most investors have never heard of.

The maker of deck ovens and other kitchen equipment has seen shares soar 300% over the last five years and more than 500% over the last decade. But it has cooled off lately. Year-to-date, shares are essentially flat, falling behind the S&P 500. This has given it some time to grow into its valuation, which recently hit its lowest point in four years.

But beyond the company's valuation and track record, there are a number of reasons to consider buying shares of Middleby today. Let's take a look at the three biggest ones. 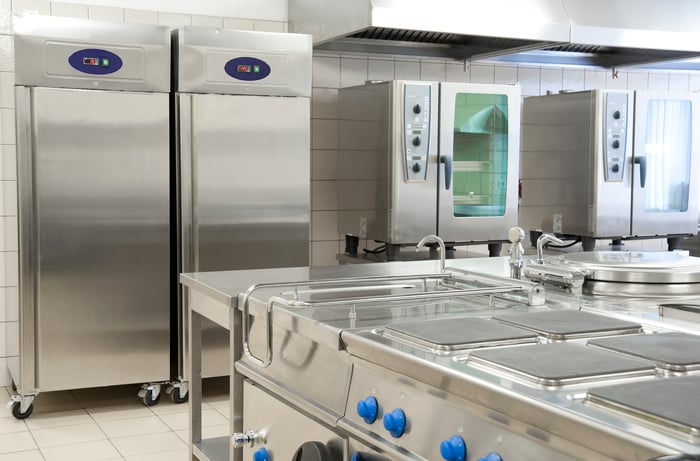 1. An ideal bet on restaurants

While the financial media may be awash in cries of a "restaurant recession," the numbers across the industry don't exactly bear that out. Through the first half of the year, sales at restaurants and bars increased 2.9% according to the Census Bureau.

That is significantly slower than last year's growth at 5.9%, but it's still outpacing grocery stores at 1.7%. In fact, Americans now spend more money at restaurants than they do at supermarkets, and that trend will continue as the stay-at-home economy takes hold, with consumers increasingly relying on restaurants to bring them dinner. Millennials have often expressed a preference for spending money on experiences like dining over things, which should also support the restaurant industry.

Picking individual restaurant stocks can be tricky, but Middleby, as the largest pure-play kitchen equipment company, may be the best way to bet on the industry's continued growth. The company will benefit from trending concepts like delivery and cocktail bars, as restaurant industry spending continues to grow.

CEO Selim Bassoul took over the company in 2000, and the stock is up 15,000%, or 150 times, since then. Bassoul turned the company around by jettisoning unnecessary product lines, focusing on the company's strengths, and adopting a smart acquisition strategy.

Indeed, Middleby has primarily grown over the years through acquisitions as it now owns a number of well-known brands including Blodgett, Viking, TurboChef, and Wunder Bar. Bassoul pursues acquisitions based on three factors:

That strategy has been crucial in delivering strong profit growth and returns for Middleby. In its most recent quarter, earnings per share grew 29% even though revenue growth was sluggish.

The company has only made two small acquisitions this year, but entered into a $2.5 billion credit facility last year, a sign that it's looking for another big takeover.

3. Other trends favor the company

Beyond growing restaurant sales, there are other secular factors that should benefit the company. Just as millennials prefer eating out over material possessions, they are also spending more money than previous generations on kitchen remodels. Included in those remodels are appliances, many of which, like Viking ranges, are likely to be Middleby products. With residential products making up more than a third of sales, that tailwind should be significant over the coming years.

In the commercial sector, meanwhile, increasing demand for automation should boost Middleby's sales. Restaurants have often complained regularly of rising labor costs, and Middleby has a number of products designed to automate commercial kitchens so businesses can save money.

For instance, Middleby has a combination machine called a Kitchen of the Future that provides a continuous cooking platform. It saves customers an average of 3,300 labor hours a year.

Organic revenue, which factors out acquisitions and foreign currency exchange, declined in the most recent quarter, which CEO Bassoul blamed on the timing of purchases and the hangover from remaining recall issues at Viking. However, he expects second-half performance to be stronger as orders pick up.

With the valuation near a four-year low and growth likely to increase, now seems like a great time to get greedy with Middleby and pick up some shares.