Why margin improvement is proving hard to come by for the supply chain solution provider, and what investors need to know about it.

Not all industrial recoveries are equal. That's the message in the second-quarter earnings report from supply chain solutions provider WESCO International, Inc. (WCC 3.18%). Aside from construction, the company's end markets are improving, but the lackluster nature of the recovery has led to pressure, and management cut its full-year expectations for margin and earnings. Let's take a look at the mixed earnings report.

Starting with the headline numbers compared to guidance from the previous quarter:

Results were broadly in line with expectations, but this marks the second quarter in a row in which WESCO has reported a middling quarter while other industrial companies have reported significantly improving earnings outlooks.

In fact, WESCO's full-year EPS and margin guidance were reduced across the board, and the sales guidance was merely maintained at the midpoint. It's worth noting that EPS guidance was cut even as management gave a more favorable outlook for its full-year tax rate.

Outside construction, sales are good

Listening in on the earnings call, it's clear that, construction aside, sales are progressing generally in line with management's expectations. CEO John Engel said, "So I would tell you, CIG [commercial, institutional, and government], Utility, Industrial are better than what our original guide presumed when we put together our 2017 outlook and articulated it in December."

The following chart shows organic sales growth since the start of 2015. 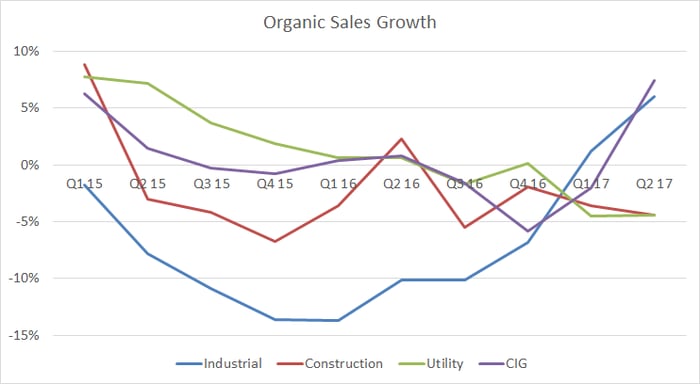 If you're wondering about the weakness in the utility end market shown above, it's largely a consequence of a contract WESCO exited last year; excluding this segment, organic sales were up 3%.

Turning to the underperforming construction end market, Engel referred to "industrial-oriented contractors whose customers have been deferring capital investments in response to the demand environment and ample capacity." Later, he described an environment where industrial-focused contractors were holding off making commitments to longer-cycle projects, which typically require larger capital spending -- a sign of a lack of confidence in the longevity of the recovery.

WESCO isn't the only industrial supplier facing a difficult margin environment. Essentially, the problem is that cost inflation is rising for key components like steel, and suppliers to WESCO are pushing prices up, but WESCO's end-market demand isn't strong enough for the company to be able to sufficiently increase prices to offset.

Engel said, "Supplier pricing increases, they continue to try to push them through. It is challenging because the end market demand has not picked up materially yet clearly in the capital project side, but even, I would say, overall."

Moreover, CFO David Schulz referred to a negative margin impact in the quarter from the timing of supplier volume rebates -- expected to balance out as the year progresses -- and higher inventory. The inventory issue is not a problem in itself, as management confirmed it's preparing for growth: Sales are forecast to grow 2% to 5% in the third quarter.

In addition, there was negative impact on margin from the relatively stronger growth of international business sales, which are typically lower margin in the industrial end market.

Like other industrial supply companies, WESCO International's challenge is to push through price increases as its costs also rise. This is largely a function of end-market demand, competitive positioning, and capacity utilization in the industry. Time will tell when the inflection point will come and gross margin starts growing again.