Please ensure Javascript is enabled for purposes of website accessibility
Log In Help Join The Motley Fool
Free Article Join Over 1 Million Premium Members And Get More In-Depth Stock Guidance and Research
By Lee Samaha - Apr 29, 2017 at 9:03AM

In an earnings season where other industrial-related companies such as Illinois Tool Works (ITW 4.34%), Dover Corp (DOV 3.91%) and CSX Corporation (CSX 3.00%) have reported strengthening conditions, WESCO International Inc.'s (WCC 9.58%) first-quarter earnings report and guidance were somewhat lackluster. Let's take a look at what happened in the quarter. Maintaining full-year guidance is possibly not a bad result, but given earnings elsewhere, investors might have expected a bit more.

For example, WESCO has strong exposure to the kinds of heavy industries that Illinois Tool Works' welding segment sells into, and there are signs of recovery in welding and heavy industries. Moreover, Dover Corp recently reported strong results in its oil and gas focused operations; WESCO has significant exposure to oil and gas, as well as metals and mining. Similarly, CSX Corporation reported volume increases in its metals and minerals related sales -- particularly in construction-related areas.

What happened with WESCO in the quarter?

Overall organic sales declined 1.7% on a year-over-year basis in the quarter following a 3.6% year-over-year decline in the fourth quarter of 2016. However, there were signs of improvement:

However, a quick look at year-over-year organic sales growth by segment reveals that only the industrial segment moved into positive territory in the first quarter. 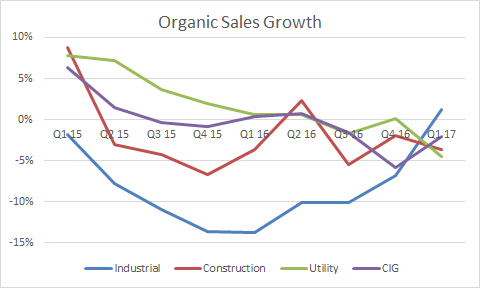 While end markets appear to be improving and helping out revenue growth, WESCO didn't get much help from pricing in the quarter. Indeed, operating margin came in right at the bottom of the guidance range. CFO Dave Schulz discussed the matter on the earnings call by pointing out that pricing had "minimal impact on revenue in the quarter." He went on to say he'd seen "construction contractors being especially price-competitive in an effort to get projects started earlier in the year," but added he believed that pricing pressure would lessen through the year.

The question of pricing came up later on the earnings call, and Engel talked of a lackluster recovery and a "lag effect" before price increases push through. Essentially, he means that suppliers are starting to see inflation pick up (so WESCO's costs are rising), but the demand environment isn't strong enough to increase pricing just yet. That could change in the future, though.

It's been a mixed industrial reporting season so far, with most companies reporting improved end market conditions. Dover and Illinois Tool Works have seen the benefits and raised guidance accordingly, but it might be a little while yet before others like WESCO experience the full benefits -- particularly with regards to pricing and operating margin.