Please ensure Javascript is enabled for purposes of website accessibility
Log In Help Join The Motley Fool
Free Article Join Over 1 Million Premium Members And Get More In-Depth Stock Guidance and Research
By Beth McKenna – Jul 30, 2017 at 8:24AM

These five charts should help get investors up to speed on the graphics chip specialist's business and stock, which has returned 195% in the last year.

The performance of the graphics chip specialist's stock has naturally increased investor attention. These five charts should help get you up to speed on the fast-growing artificial intelligence (AI) player and its stock. 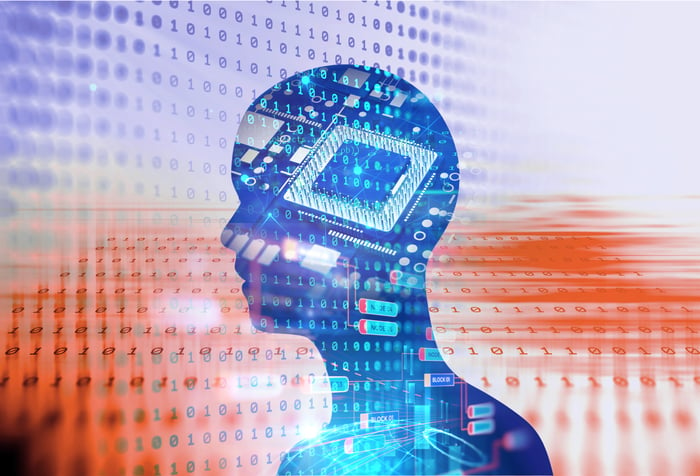 The following two charts show how the company's revenue broke out by these categories in its most recently reported quarter.

The flagship GPU segment's main processor product lines include the GeForce for gaming, Quadro for design professionals, and Tesla for cloud computing. The Tegra business makes processors that integrate a computer onto a single chip, and are used in things that are mobile, including mobile electronic devices, autos, and drones.

In the last several years, NVIDIA's GPUs have moved beyond their gaming and professional visualization roots to applications involving deep learning, a niche within AI in which software aims to mimic human thinking.

NVIDIA's data center platform has been the primary beneficiary of the fast-growing adoption of AI, though its auto platform began benefiting just over a year ago when the company began shipping its DRIVE PX 2 AI car platform, a supercomputer for processing and interpreting all the data taken in by various sensors about the surroundings of semi-autonomous and fully autonomous cars. (DRIVE PX 2 spans both Tegra processors and GPUs.) 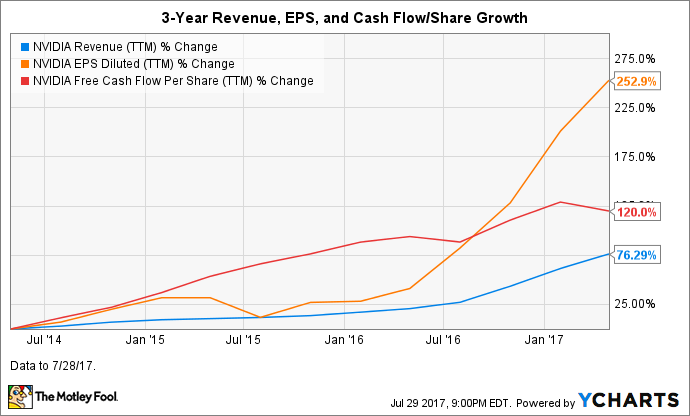 NVIDIA's key financial metrics have been growing more rapidly in recent years thanks to strong growth in gaming combined with the company's expansion into AI-driven applications. The accelerating growth dynamics are even more obvious on longer-term charts.

We can answer this question from a revenue perspective, but not from an earnings one, as NVIDIA doesn't provide any measure of profitability for its segments or market platforms.

Both segments are humming along, with GPU revenue climbing 45% and Tegra revenue soaring 108% year over year in the most recent quarter. Here's the market platform picture:

Investors should be able to count on auto growth revving up due to last year's launch of the previously mentioned DRIVE PX 2 AI car platform. Automakers Toyota, Tesla, Mercedes-Benz, Volvo, and Audi have partnered with NVIDIA in their self-driving car initiatives. Chinese search engine giant Baidu recently announced that it will use DRIVE PX 2 for its autonomous vehicle initiative and will use the platform in developing self-driving cars with Chinese automakers. More than 225 automakers, suppliers, and other entities have started developing autonomous driving systems using DRIVE PX 2, NVIDIA CFO Colette Kress said on the first-quarter analyst conference call, making the company's stock a strong play on driverless cars. 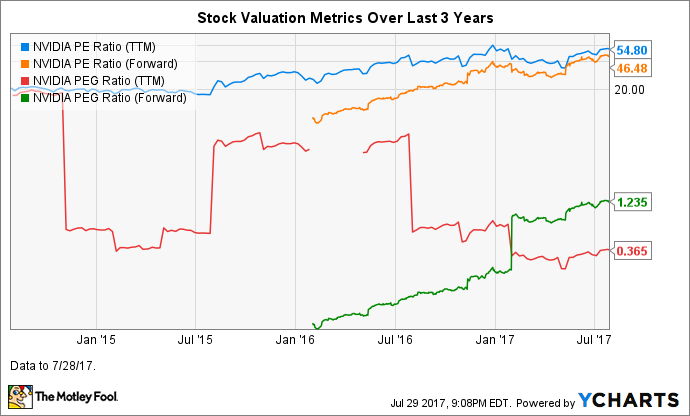 NVIDIA stock is pricey on an absolute basis, as it's trading at 54.8 times trailing-12-month earnings and 46.5 times projected forward earnings. However, looking at price-to-earnings (P/E) ratios without taking earnings growth dynamics into account is close to meaningless, in my opinion.

The stock looks more palatable when we bring earnings growth into the valuation mix by looking at the PEG (P/E divided by trailing or future projected earnings-per-share growth). While various factors come into play, a rough rule of thumb is that a PEG of 1.0 implies that a stock is fairly valued. NVIDIA stock's trailing PEG of 0.39 is very attractive, though the past is behind us. The forward PEG -- which is based on Wall Street analysts' EPS estimates for this year -- of 1.24 implies that the stock is somewhat overvalued, but not outrageously so.

NVIDIA has several massive growth opportunities, including AI-driven cloud computing and driverless cars, VR, and gaming. However, competition is heating up. In gaming, Advanced Micro Devices is gunning for NVIDIA in the high-end graphics card market. And many tech powerhouses want a piece of the AI action, including Google, Intel, Apple, and others. NVIDIA's primary risk is that other technological approaches to AI will become more favored than its GPU-based deep-learning one.

For NVIDIA's stock to be a good fit for you, you need to believe that its GPU-based approach to AI will prove a winning one over the long term.