CalAmp's (NASDAQ:CAMP) stock is flying high right now -- up more than 30% so far this year -- and last month it released its first-quarter 2018 earnings report, with revenue and earnings per share coming in at the high end of the company's guidance. The machine-to-machine communications company makes equipment that helps track industrial equipment for companies, as well as fleets of vehicles, and owns the LoJack brand of vehicle recovery systems, and right now there's a lot of expectation that CalAmp can win a large portion of these markets.

There's a lot of investor optimism right now there, but there are two things that investors might worry about but management wants them to ignore. The first is a patent lawsuit CalAmp is involved in, which cost the company $6.1 million in the first quarter and severely brought down the company's earnings. The second is the remote possibility that the government could pass legislation that would delay a trucking mandate that's expected to be a boon to CalAmp's business. 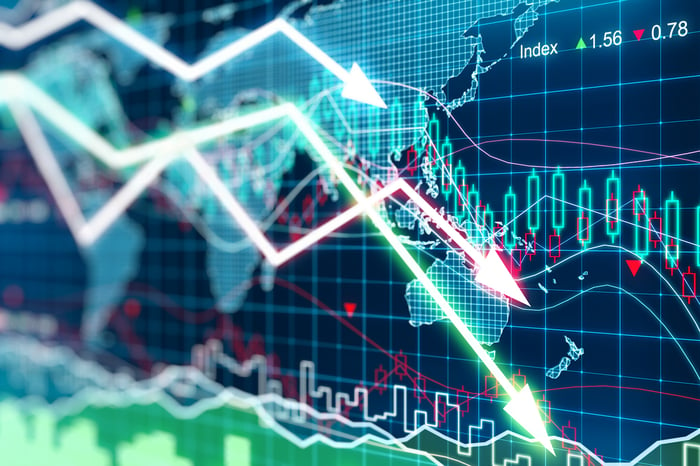 CalAmp reported a net loss of $2.7 million in its first-quarter fiscal 2018, which was mainly the result of $6.1 million patent infringement judgement that the company recorded in the quarter, which increased CalAmp's General and Administrative (G&A) expenses. The 2013 lawsuit alleges that CalAmp is infringing on patents by a non-practicing company called Omega Patents. And while the lawsuit clearly impacted CalAmp in the quarter, management said that CalAmp is continually fighting the suit and that it hasn't infringed on any patents.

CalAmp CFO, Richard Vitelle, said on the call last month that, "Notwithstanding this litigation accrual booked in the first quarter, we are continuing to pursue all legal remedies, and management believes that CalAmp will ultimately prevail in this matter."

And when asked on the call when litigation expenses will drop off, CalAmp CEO Michael Burdiek, said,

"As it relates to the level of legal activity, on the Omega patent front, obviously, we're going to do whatever we need to do there to ultimately prevail. And beyond that, everything else is unpredictable, really. But I would say given the unprecedented nature of the legal spend and the challenges we faced last year, I would hope we wouldn't have another repeat of that this year."

That doesn't exactly sound like the litigation expenses are done, but it does sound like CalAmp is confident that they'll ultimately be able to beat Omega in the courtroom. That's both bit of good and bad news for investors, because it's likely there will be more legal costs involved in the future.

Don't worry about the government

The second thing that CalAmp's management probably doesn't want investors to worry about -- though it didn't expressly say it on the call -- is a current House of Representatives bill that recommends delaying the electronic logging device (ELD) mandate until 2019.

The current ELD mandate will require connected devices in trucks that track their hours of service, to ensure that drivers aren't on the road more than they're allowed to be, by December of this year. The proposed bill would push the mandate back to 2019.

CalAmp sells devices that will help companies comply with the ELD mandate and is already seeing its mobile data terminal (MDT) product pipeline increase because of it. The potential market for ELD devices could be a boon to CalAmp's business, and the company said back in December that 1 million commercial transport vehicles will soon be required to have electronic ELD systems, which could "drive incremental demand for new in-vehicle displays and telematics devices over the next two to three years."

CalAmp also said last month that it will introduce additional products and possibly some new partnerships because of the mandate.

In theory then, a delay of the ELD mandate by two years could delay sales of the company's MDT products to companies looking to comply with the mandate. But there's evidence showing that CalAmp shareholders should't worry about it.

At worst, the mandate would be extended by two years and some of CalAmp's customers could delay orders for a bit (but still place them). But several industry associations, including the Alliance for Driver Safety & Security, believe there isn't any reason to delay the mandate and other delay attempts have already been defeated in court.   While a mandate extension could hurt some of CalAmp's business, it just doesn't appear likely to happen.

So while investors may be keeping a pulse on both the patent infringement and the ELD delay prospects, it's likely the latter isn't much to get worried about. But the patent litigation on the other hand isn't completely resolved, and while management doesn't want shareholders to focus on it too much, it's likely that it could come back to hurt the company in future quarters, even if CalAmp ends up winning in court. That doesn't mean investors should change their investment thesis for this stock, but they should understand that litigation fees may come up again in the future.