With its shares up 45% over the past year, there was a lot of optimism built into Airbus (OTC:EADSY) stock heading into earnings last Thursday. Airbus entirely failed to reward investors' optimism, missing analyst targets for both sales and profits, and warning that delays in obtaining new engines were slowing down deliveries of new airplanes.

And yet, this morning, Connecticut-based equity research firm Vertical Research Partners upgraded Airbus stock anyway. Here are three things you need to know about that. 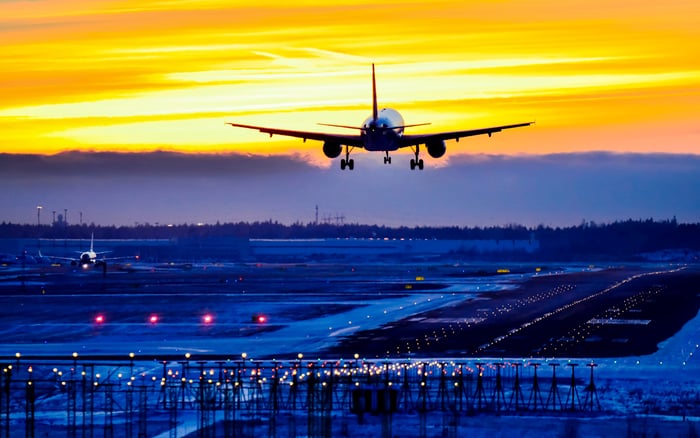 Airbus is Boeing's (NYSE:BA) biggest rival in commercial airplanes, and one half of a globe-spanning, large-airplane-building duopoly that, between the two companies, supplies transport jets to most of the world's airlines. With $90.9 billion in annual sales, Boeing's overall business is about 16% bigger than Airbus'. In commercial airplanes specifically, Boeing has about a 25% lead over Airbus, moving more than $65 billion in product annually.

But whereas Boeing reported a boffo quarter last week -- $2.89 per share in net profit, and free cash flow of $4.5 billion -- Airbus actually fell far short of expectations. Sales for Airbus' fiscal second quarter 2017 came in at $17.95 billion, about 3.5% behind analysts' estimates. Operating profits for the quarter were a bit more than $1 billion -- but Wall Street had predicted closer to $1.1 billion.

Granted, this was a big earnings improvement over last year's Q2, in which S&P Global Market Intelligence data showed Airbus reporting an $815 million loss. But even so, it was below expectations -- and sales were down 3.5%.

2. What Vertical Research said about what Airbus said

Commenting on the results, equity research firm Vertical observed that slow deliveries of new engines for Airbus' line of A320 NEO ("new engine option") aircraft were challenging the company's efforts to "ramp" sales. That said, Airbus is "working its way through" its difficulties, and the analyst is optimistic about the company's chances "as it makes progress on these issues."

3. What Vertical likes about Airbus

Worries about the airplane makers have centered on a decline in new orders in recent years, and eroding backlogs at Boeing and Airbus. And yet, Vertical sees airline customers' revenue per mile (RPM) numbers continuing to grow, and airline profits as "robust." This, in the analyst's view, bodes well for airlines continuing to buy new airplanes from Boeing and Airbus. In short, Vertical says that "concerns over the aerospace cycle rolling over have receded."

Sales at Airbus may be down temporarily, and the analyst believes Airbus will now earn only about $3.59 per share this year, and $5.31 next year (5% and 2% below previous estimates, respectively). Still, these numbers represent big improvements over what Airbus earned over the past year. Vertical believes the stock is gaining strength -- and the time to invest in Airbus is now, while it's making progress on its problems, rather than later, after it's solved all its problems.

The most important thing: Valuing Airbus

Making that bet on Airbus's solving its problems, however, requires a leap of faith. Here's how the numbers look:

Currently, Airbus has earned $1.09 per share over the past 12 months, or $869 million for the company as a whole. At a market capitalization of $64.4 billion, this values the company at a whopping 74 times trailing profits. Boeing -- even with its much higher market capitalization of $142.6 billion -- earns so much more profit than Airbus that Boeing's stock carries a much cheaper valuation of only 20 times earnings.

So on the one hand, even if Vertical Research is right about Airbus more than tripling its profit to $3.59 per share by the end of this year, that would only bring the stock's current-year valuation down to 22.4 -- still 12% more expensive than Boeing.

Granted, if Vertical is right about Airbus' 2018 profits as well, then $5.31 per share earned next year would be nearly five times the profit Airbus earned over the past year. This would bring Airbus stock's P/E ratio down to just 15.2 times forward earnings. With most analysts in agreement that Airbus will outgrow Boeing (off its much smaller base of profits) over the next five years, then Vertical might be right: Faster growth in profits could ultimately help Airbus to overtake Boeing and become a better buy.

Of course, all of this requires Airbus to hit the profit targets that analysts are setting for it, which is something Airbus failed to do last quarter. Whether you choose to follow Vertical Research's advice and buy Airbus stock today probably depends on whether you agree Airbus will mend its mistakes and do better next time around.