Please ensure Javascript is enabled for purposes of website accessibility
Log In Help Join The Motley Fool
Free Article Join Over 1 Million Premium Members And Get More In-Depth Stock Guidance and Research
By Adam Levine-Weinberg - Jul 31, 2017 at 7:10AM

A short squeeze has driven Dillard's stock to an irrationally high level.

Thus far, 2017 has been a bad year for department stores. Weak sales results and concerns about competition sent most department store stocks plunging in the first several months of the year.

However, department store stocks have started to bounce back in the past few months. For example, Kohl's (KSS 2.98%) stock has recovered almost half of its losses for the year since early June. But shares of regional department store Dillard's (DDS 8.27%) have gone much higher. Since hitting a multi-year low in mid-May, Dillard's stock has soared more than 70%. 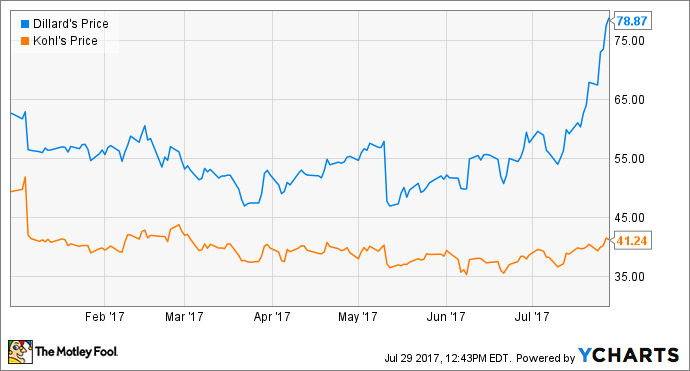 This doesn't reflect strong operating performance. Instead, Dillard's seems to be experiencing a massive "short squeeze," as investors who shorted Dillard's stock are rushing in a panic to cover their positions. There's no telling when the short squeeze will end, so Dillard's stock could have more upside. But once the panic buying ends, Dillard's share price will probably plunge again.

A few years ago, Dillard's stock was soaring for good reason. Through a combination of careful inventory management and stingy capital spending, Dillard's consistently posted strong free cash flow. It then used most of that cash to buy back stock. As a result, its share count has declined by nearly 60% since the beginning of 2010, which has boosted earnings per share.

This strategy was effective as long as net income and free cash flow were rising -- or at least stable. However, adjusted net income peaked at $328 million in fiscal year 2014. Since then, steady declines in sales have whittled away the company's earnings power. Dillard's earnings power has plunged in the past two years. Image source: Author.

First-quarter results: Not terrible, but not great

In the first quarter of 2017, Dillard's comp sales decreased 4%, and net income fell to $66.3 million from $77.4 million a year earlier. Thanks to the company's share buybacks, EPS barely budged, slipping to $2.12 from $2.17 a year earlier. Despite these fairly respectable results, Dillard's stock cratered after the earnings report came out, as poor results from department store giant Macy's spooked investors.

Kohl's also posted disappointing sales results for the first quarter, with comp sales down 2.7%. However, adjusted EPS soared 26% year over year, the result of a combination of higher gross margin, solid cost control, and a lower share count.

Kohl's stock also declined following its Q1 earnings report, even though its EPS of $0.39 came in well ahead of the average analyst estimate of $0.29. This was pretty clearly an overreaction on investors' part, paving the way for a rebound.

Sure enough, Kohl's stock has marched more than 15% higher since mid-June, recovering all of its post-earnings losses. Initially, Dillard's stock followed a relatively similar trajectory. However, in the past three weeks, it suddenly zoomed higher, surging from a closing price of $54.02 on July 10 to $78.87 by the end of last week.

This has the look of a classic short squeeze. In recent months, more than half of Dillard's "float" -- its publicly-traded shares -- have been sold short. Thus, there aren't many shares available for purchase to meet the potential demand if short-sellers stampede for the exits.

In this short-squeeze scenario, the stock's fundamentals don't matter much. If Dillard's stock price rises far enough, many short-sellers will get margin calls from their brokers. Unless they have more capital available to cover their losses, they will be forced to close out their positions -- no matter how overvalued the stock may appear to be.

Right now, Dillard's stock trades for nearly 17 times its projected 2017 earnings. This seems rather high for a company with declining revenue and earnings. Given management's reluctance to make significant investments in the business, Dillard's isn't likely to make a comeback in the foreseeable future.

Despite this poor outlook for Dillard's, it's too dangerous to short the stock. The ongoing short squeeze could easily drive Dillard's stock to even more irrational levels.

On the other hand, buying Dillard's shares here would be extremely risky. The stock seems overvalued already, so once the short squeeze ends -- whenever that is -- Dillard's shares are likely to fall back to earth. Investors should just avoid this roller-coaster stock entirely.