CFO Kate Jaspon says the restaurant franchisor is trying to strike the right balance between "smart growth" and adapting to changing consumer preferences.

Dunkin' Brands Group (DNKN) reported second-quarter results on July 27. The parent company of Dunkin' Donuts and Baskin-Robbins said that it will reduce the pace of its restaurant openings in the second half of the year as it works to redesign its store format. 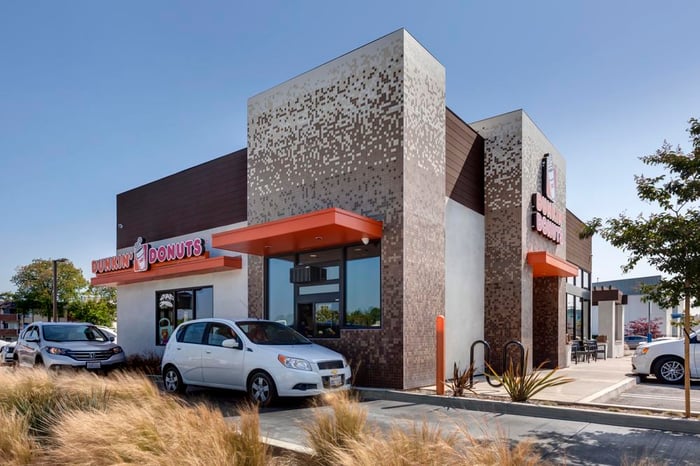 Franchisees opened 64 Dunkin' Donuts and 12 Baskin-Robbins net new stores in the United States, bringing the chains' U.S. store counts to 8,948 and 2,551 locations, respectively, at the end of the second quarter. That represented year-over-year unit growth of 4.4% for Dunkin' Donuts and 0.8% for Baskin Robbins.

In all, companywide revenue rose 1%, to $218.5 million, as higher royalty and rental income was mostly offset by Dunkin' Brands' sale of its remaining company-owned restaurants in the fourth quarter as part of its plan to become a 100% franchised business.

Yet these store closures allowed Dunkin' Brands to shed some operating expenses, which, along with the higher royalty and rental income, helped drive adjusted operating income higher by 6.9%, to $118.9 million, as adjusted operating margin improved to 54.4%, up from 51.5% in the prior-year period.

Dunkin' Brands reiterated its 2017 guidance for "low-to-mid single digit" revenue growth and adjusted earnings per share of $2.40 to $2.43. But while the company continues to expect low-single-digit comparable-sales growth for Dunkin' Donuts U.S. stores, it lowered its comp forecast for Baskin-Robbins U.S. locations to "slightly negative," compared to previous estimates of low-single-digit growth.

Management also cut its store-opening projections, with Dunkin' Donuts U.S. franchisees now anticipated to add 330 to 350 net new restaurants, down from a prior estimate of approximately 385 stores. And the company reduced its international-unit growth outlook to a range of 50 to 100 net new restaurants across its two brands, versus a previous target of 200 new international locations.

"With a new store model on the horizon, a large number of restaurant remodels due, and more investment required in equipment and technology, we are working with our franchisees to plan the most effective use of their capital expenditures so that we strike the right balance between driving smart growth and ensuring the current store base meets consumers' changing needs," CFO Kate Jaspon said in a press release.

Yet Jaspon was quick to note that even at this reduced pace, Dunkin' Brands remains on track to deliver top-tier growth in 2017. "We still expect to finish the year as one of the fastest growing brands in the U.S. restaurant industry both in terms of net store growth and increase in systemwide sales," Jaspon said.