Expedia's (NASDAQ:EXPE) stock saw a nice little pop at the end of last week, after the company released its Q2 results. It beat the average analyst estimate for revenue, although it came up a bit short on the bottom line. Here's how the quarter played out for the big online travel agency.

On average, analysts were projecting $2.54 billion on the top line, and a per-share earnings figure of $0.93.

Breaking down the results further, the company's "core" operations -- generally the older brands in its big portfolio, anchored by its namesake travel portal -- saw a 12% increase in revenue, matching the growth of gross bookings. On a conference call discussing the results, CEO Dara Khosrowshahi attributed this to "good momentum, evidenced by faster room night growth in every major region." 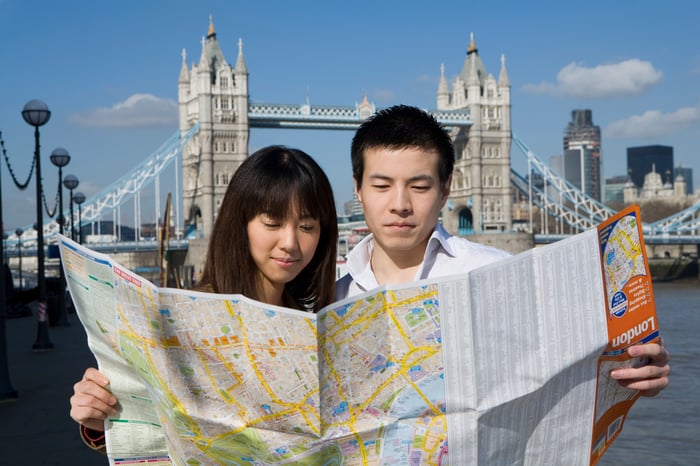 Room night growth is a key driver of the company's results; 66% of its revenue during the quarter derived from accommodation bookings.

The core's top-line improvement was outpaced by several outlying company divisions. HomeAway, the rent-your-place-to-tourists service, grew its revenue by 30%. Trivago (NASDAQ:TRVG), recently spun off in an IPO yet still majority-held by Expedia, saw its top line expand by 62% and gross profit by 57%. Business-travel specialist Egencia, meanwhile, had more modest improvements.

These three units are still relatively small when matched against Expedia's core operations -- HomeAway brought in $409 million in revenue during the quarter, Trivago's top line was $399 million, and Egencia reaped $257 million. Still, as in quarters past, their hotter top-line growth is helping juice overall revenue.

The "good momentum" Khosrowshahi spoke of is providing a helpful lift to Expedia's results. But we should keep in mind that the online travel business, although it's dominated by Expedia and arch-rival Priceline Group, is a big space with a great many smaller operators jockeying for business.

That, plus the large-and-growing-ever-larger portfolio of both Expedia and Priceline, make it necessary to spend generously on publicizing and selling the services of its brands. In Q2, Expedia sacrificed over $1.4 billion on these efforts. On both an absolute basis and as a percentage of overall revenue, this amount was higher than in Q2 2016; it grew by 25% year over year to comprise 56% of the top line.

Investors like when their company posts double-digit improvements in key line items, no matter if it falls just short or comes in a bit over expectations. Such was the case with Expedia, which is doing a good job riding the momentum of a healthy global travel industry.

If I were a shareholder, I'd be particularly optimistic about the performance of the HomeAway subsidiary; Expedia is clearly taking advantage of the DIY trend in accommodation just now. It's also good to see the robust growth of Trivago -- the Europe-based hotel search-engine operator boosts its parent's take in a crucial international market and reduces its reliance on U.S. business.

In all, it was a fine quarter for the company, which can hopefully keep riding that good momentum through the summer season -- the most crucial part of the year for travel operators.