Troughton-Smith posted his findings to social media (via MacRumors). Let's go over them. 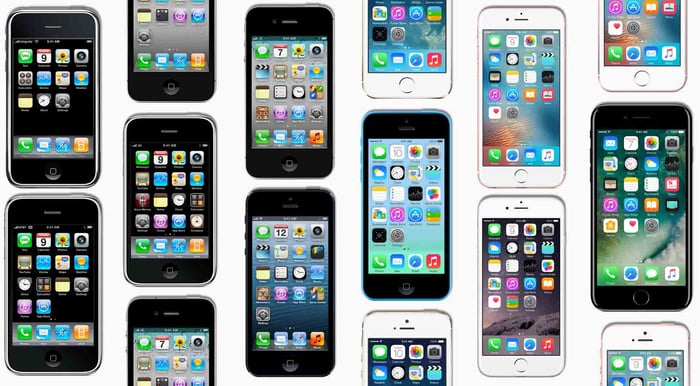 Troughton-Smith found the following image inside of the HomePod's firmware, presumably depicting the iPhone 8:

The bezel-less iPhone image can be extracted from Payment_glyph_phone-D22.caar in PassKitUIFoundation.framework with the code pictured pic.twitter.com/HAyDO0E931

Kuo's description of the device appears to have been accurate; the illustration of the new iPhone found in the HomePod's firmware matches up perfectly with his description.

That's not the only thing that Kuo got right, either.

Kuo even published the size and pixel resolution of the non-function area portion of the display.

Kuo also said that the usable area of the display would be 5.15-inches. That claim can't be confirmed by the leak directly, but considering that Kuo nailed the resolution and the other bits, I view this as a verification of Kuo's report.

Touch ID out, Face ID in

Apple had been rumored to be trying to embed a Touch ID sensor underneath the OLED display in the upcoming iPhone. Recent reports, however, suggest that, at best, Apple is still struggling to get the feature implemented, and that at worst, Apple has simply dropped the feature altogether.

Per Troughton-Smith, there's "nothing" in the firmware "to suggest an ultrasound under-the-display Touch ID here."

Although there's still a possibility that Apple could add the feature in and that it might be exposed in a future HomePod firmware update, Troughton-Smith's findings definitely have me doubting that the under-the-display Touch ID is happening.

Apple's iPhone 8 is also rumored to have a facial recognition system that, per Bloomberg, is intended to ultimately supplant Touch ID.

Troughton-Smith tweeted that he found evidence in the HomePod firmware that "reveals the existence of upcoming iPhone's infra-red face unlock ..."

Although much of the information about Apple's upcoming iPhone had been leaked via supply chain rumors, anonymous sources, and so on, this direct confirmation straight from Apple's code is really interesting.

All that's left for Apple investors at this point, given the sheer volume of these leaks, is for Apple to launch the devices, announce the price points, and then get these devices into the hands of consumers.

It'll be very exciting to see how it ultimately does.