Shares of e-commerce and cloud computing giant Amazon.com (NASDAQ:AMZN) dropped following the company's second-quarter report, with strong revenue growth overshadowed by a steep plunge in profits and guidance calling for a possible loss during the third quarter. While revenue soared 25% year over year, net income tumbled 77%.

This isn't the first time Amazon's bottom line has come up short of expectations, so it shouldn't have been a surprise to investors. Amazon is a growth-at-all-costs company, and it's been that way since its founding. Shares have more than tripled over the past three years, with the market applauding Amazon's growth and ignoring the associated price tag.

The only trend that has mattered to the market, except during the occasional post-earnings tantrum, has been revenue growth. But Amazon's second-quarter report exposed three negative trends, beyond a tumbling bottom line, that investors should be aware of. 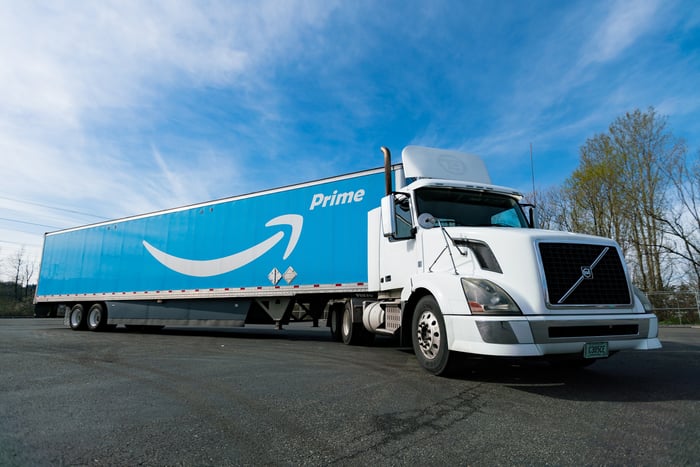 Amazon reports a few different variations of free cash flow. The first "free cash flow" measure, which I'll put in quotes because it's pure nonsense, has been consistently soaring. Over the past 12 months, free cash flow totaled $9.7 billion, up from $7.7 billion one year ago.

But this "free cash flow" number only reflects a portion of Amazon's spending. In addition to straight capital expenditures, Amazon uses capital leases prodigiously to finance its growing empire. Under a capital lease, the lessor finances the leased asset, and all other rights of ownership transfer to the lessee, in this case Amazon. The asset goes on the balance sheet, along with the capital lease liability.

Long story short, acquiring an asset under a capital lease is really no different than borrowing money from a bank to finance a capital expenditure. But Amazon's "free cash flow" ignores capital leases entirely, leading to an inflated metric.

Amazon reports a much more useful free cash flow figure, free cash flow less finance lease principle repayments and assets acquired under capital leases, that should be viewed as its true free cash flow. This number, measured over the trailing-12-month period, has tumbled in recent quarters. 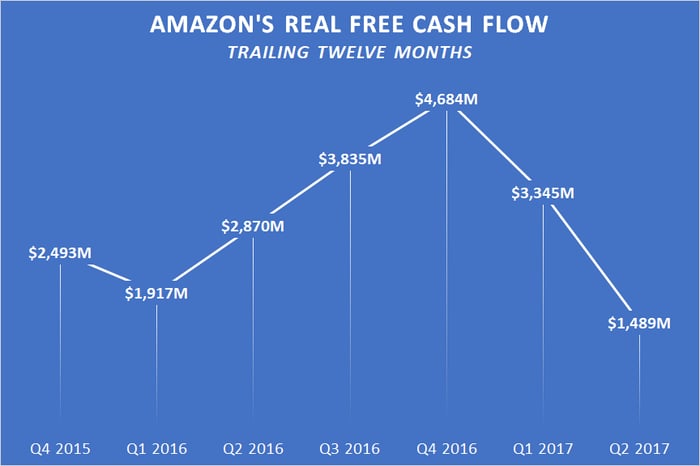 Amazon's heavy spending is to blame -- total capital expenditures plus assets acquired under capital leases totaled $16.2 billion over the past 12 months. With Amazon hurling increasing amounts of cash into efforts to grow sales, the real free cash flow has suffered. And the real free cash flow minus stock-based compensation is now squarely negative.

Marketing costs are on the rise

More than 50% of online shoppers turn to Amazon first when searching for a product, according to Bloomberg. That's a testament to how ingrained Amazon has become in the habits of online shoppers. Its Amazon Prime service has certainly driven this percentage up, with unlimited two-day shipping creating a strong incentive for shoppers to begin and end at Amazon.com.

Despite this mind share domination, Amazon spends an incredible amount of money of marketing aimed at closing sales. In 2016, Amazon spent more on advertising than Wal-Mart, Target, Best Buy, Home Depot, and Kroger combined, in spite of those companies producing six times Amazon's revenue collectively. And Amazon's marketing spending, in absolute terms and relative to revenue, just keeps going up. 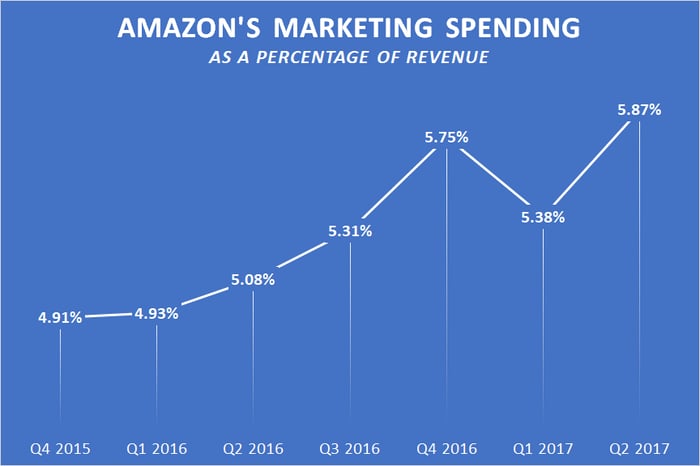 I'm not sure how to reconcile this marketing spending with the fact that so many online shoppers turn to Amazon first. It seems that getting customers to ultimately click "buy" is an expensive proposition, even for Amazon, and it's getting more expensive over time.

Amazon's prolific spending has come at the expense of the balance sheet. While long-term debt hasn't changed much in the past couple of years, capital leases have soared, pushing the total debt including capital leases to nearly $20 billion. 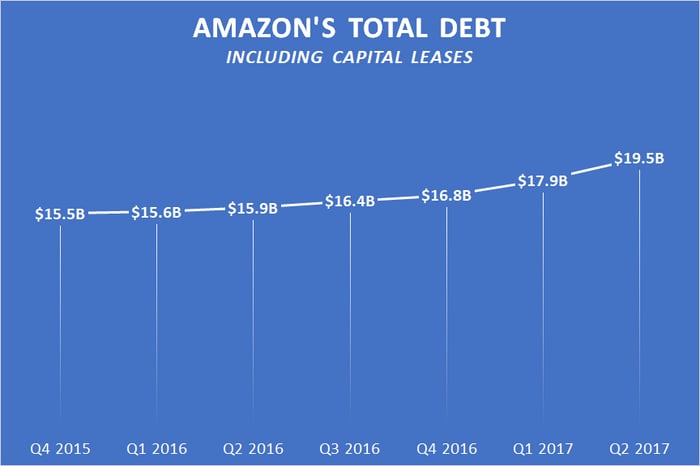 The announced acquisition of Whole Foods will drive Amazon's debt even higher, with the company planning to pay $13.7 billion, including Whole Foods' net debt, in an all-cash transaction.

Taking on debt to fund growth is fine, as long as those growth investments produce a sufficient rate of return. With Amazon consistently producing meager profits, it's hard to tell whether that will be the case.