It's not a big secret that the brick-and-mortar retail industry isn't exactly in excellent shape right now. Bankruptcies and store closing announcements have frequently been in the headlines, and investors are worried that Amazon.com and other e-commerce competitors will continue to erode market share and profit margin from retailers.

While these fears aren't completely unfounded, it's important to point out that not all brick-and-mortar retailers are in the same category. Here's a look at two of the largest retail real estate investment trusts, or REITs -- Realty Income Corporation (NYSE:O) and Regency Centers Corporation (NYSE:REG) -- to determine which could be the better buy now.

Some basic information about the two companies

Realty Income is focused on net-lease, freestanding retail properties, which make up about 80% of its portfolio (the rest is office and industrial). As of this writing, the company owns 4,980 properties located in 49 states and Puerto Rico.

If you're not familiar with it, net-lease real estate typically refers to freestanding properties. Tenants sign long-term leases (often 15-year initial terms or longer) with rent increases, or escalators, built in. The "net" part of the term refers to the tenant's responsibility for expenses such as property taxes, insurance, and certain maintenance costs.

On the other hand, Regency Centers owns, operates, and develops retail shopping centers. The company currently owns 429 centers with a total of 59 million square feet of retail space. About 80% of Regency's centers are grocery-anchored, with Publix, Kroger, and Whole Foods among its top five tenants.

Unlike Realty Income, Regency Centers grows through development, which can be an excellent way to create value and boost returns. Since 2009, Regency has spent $1.6 billion on development projects, and has an objective to spend $300 million annually on development and redevelopment, in addition to significant acquisition and disposition activity. 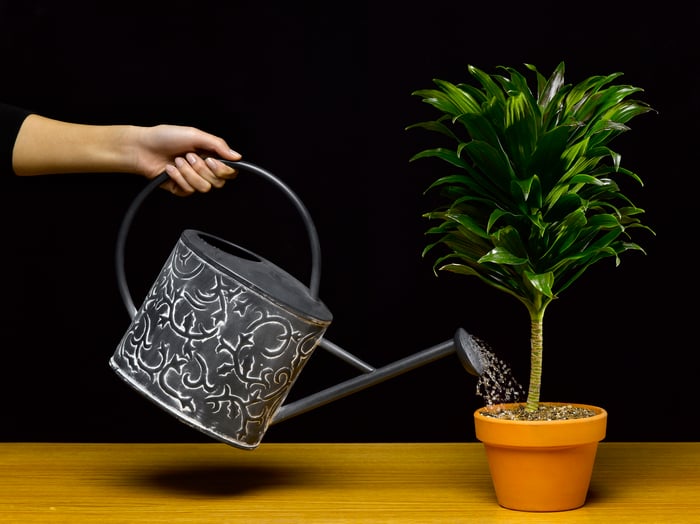 Which is the best retail REIT to grow your nest egg? Image Source: Getty Images.

In addition to the net lease structure, which has the obvious appeal of steady income and low turnover, Realty Income's property portfolio is resistant to the e-commerce headwinds plaguing the retail sector right now, and is also rather recession-resistant as well.

Specifically, most of Realty Income's retail properties fall into one of three categories:

Is Regency Centers really a riskier form of retail?

Generally speaking, I'd call shopping center properties a riskier form of retail real estate than the type of tenants occupying Realty Income's freestanding properties. Shopping centers tend to have significant exposure to recession-prone businesses, as well as businesses competing against e-commerce giants. However, Regency Centers has some of the same risk-mitigating factors as Realty Income.

For starters, its properties are mostly located in affluent markets, with an average household income of $105,000 and population of 135,000 within three miles of its centers. In other words, Regency's target customers have significantly above-average disposable income.

Additionally, Regency has high concentrations of e-commerce-resitant tenants. In addition to its grocery anchors, most of which are considered to be "top tier," major tenants include TJX, CVS, LA Fitness, and Petco. In all, 50% of Regency's income comes from restaurants and other service-based businesses, 25% comes from necessity-based tenants (like grocers), and 20% comes from off-price or best-in-class retailers. Just 5% of the company's retail tenants are in "at-risk" businesses that are exposed to e-commerce or other retail sector headwinds.

Notice the overlap between Realty Income's and Regency Centers' portfolio composition. Although they focus on two very different property types, the focus is on the same three types of retail businesses. In fact, the companies even have a few major tenants in common.

Both companies also have similar financial structures. They have similar debt-to capitalization ratios and access to credit, and even have identical BBB+/Baa1 credit ratings.

In a nutshell, both of these REITs are ways to invest in retail, without exposing yourself to the "risky" side of the industry that you keep reading about in the headlines.

As you can see, these are two similar plays on retail real estate. Realty Income has the edge in terms of its lease structure, but I also like Regency Centers' willingness to grow through development. To determine which is the best bet right now, let's take a look at both companies' valuation, based on 2017's expected funds from operations, or FFO.

Regency Centers is valued a little cheaper than Realty Income, but this is somewhat offset by Realty Income's more attractive lease structure as well as its rock-solid dividend history. It's difficult to say that one of these stocks is the better buy right now, as I consider them both attractive at the current price levels. Having said that, of the two, I'd put my own money into Realty Income right now.