Target (NYSE:TGT) has two new ways of bringing its store directly to college students. The chain, which has long bused student shoppers to its stores for festive, after-hours events at the beginning of the school year, has cut back those efforts for this year's back-to school season. The retailer has decided to focus on college students by opening seven small-format stores near college campuses by fall (part of its plan to increase its small-format stores from 45 to more than 130 by the end of 2019) and testing a new service it calls "Shop Now, Pickup Later."

Offered on six campuses, the service lets students order from a curated list of dorm-room necessities. Think everything from bathroom supplies to appliances, beds, towels, and bricks of ramen noodles. Once the students place their orders, they can pick them up at a pop-up location either on their campus or at a nearby Targettore just before classes start. 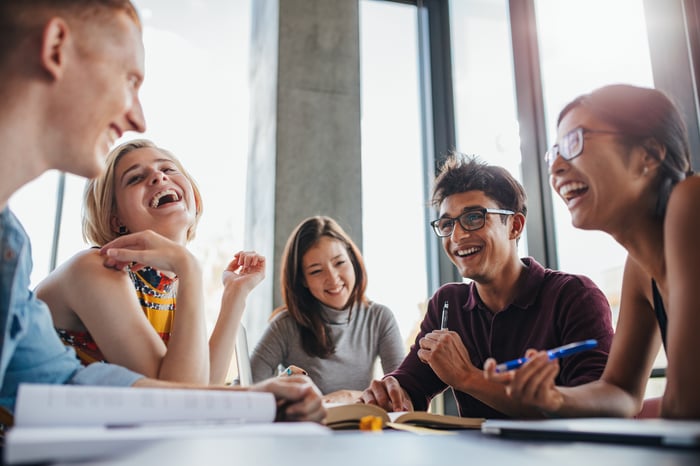 In addition to the pop-up locations, the retail chain wants to bring permanent shops closer to where people live, especially in cities. A major piece of that involves opening roughly 100 small-format stores by the end of 2019. These stores will be located in "dense urban and suburban markets and on college campuses," according to the company.

At around 30,000 to 40,000 square feet, these locations come in at about a third (or less) the size of a traditional Target. These smaller locations offer a curated assortment of items based on the needs of the community. Target trumpeted its "small but mighty Target stores" as "a college student's dream."

"Going off to college is a new life stage -- students are making their own shopping decisions for the first time," said Target Senior Vice President Mark Schindele in a company press release. "We want to help make students' experiences fun and easy, serve up products and services they'll love and show them the best that Target has to offer, so they become lifelong guests."

Some of the smaller Targets will actually be on college campuses, but most of them will be near one or more schools. These stores will at least partly focus on the items college students shop for most, with food, "especially grab-and-go lunch and snack items like bananas, sandwich bread, Greek yogurt and apples" topping the list, according to the company. The city-based stores will also stock essentials including "toothpaste, toothbrushes and body wash" as well as clothes, dorm room decor, and school supplies.

"It's particularly important for small-format stores near college campuses to get to know the unique needs of our student guests," said Scott Timpani, a Target team leader of one of the new smaller stores located near the University of California Irvine location.

He explained in the press release that during the school year, about 10,000 students cross a pedestrian bridge each day that ends a few steps from his Target's back entrance. "Knowing these guests are often heading to class or simply in a hurry, we have four self-checkout kiosks next to the doors so they can quickly complete purchases and be on their way," he said.

The location also has a seating area near its in-store Starbucks with charging outlets so students can recharge their phones and other devices.

Target has over 1,800 locations and currently only 45 of them are smaller-format stores. Even adding another 100 still represents a very small part of the overall company.

In targeting dense, city environments and college kids specifically, the retailer accomplishes two things. First it's putting stores in locations it previously didn't. That creates more potential shoppers while also helping its online business, since the stores will serve as a place to pick up digital orders.

Going after college students provides a second benefit beyond the potential for more sales. It introduces younger customers to Target and builds loyalty to the brand that should continue as they grow older.

These are just pieces in a bigger strategy for the retailer, but smaller stores and pop-up locations on or near college campuses should help the chain. So far the company is just dabbling with a smaller-is-better strategy, but if the results continue to be positive, it opens up all sorts of new locations that may be viable for the company.