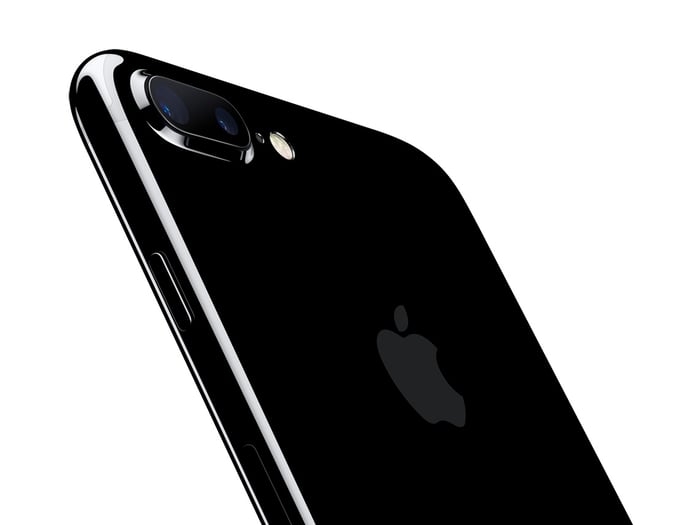 Such growth is good, and a deeper look shows a solid underlying business.

Here's what CEO Tim Cook had to say

On the conference call accompanying the earnings release, Apple CEO Tim Cook characterized the company's iPhone results as "impressive" and noted that there was "especially strong demand at the high end of [Apple's] lineup."

Apple has been launching two flagship smartphones per year, beginning in late 2014 with the iPhone 6 series: a standard model with a 4.7-inch display, and a "Plus" model with a 5.5-inch display.

The iPhone 7 Plus also has a sharper display than the iPhone 7.

Cook said the iPhone 7 -- not the Plus -- was Apple's "most popular" iPhone last quarter, but he noted that this quarter, "sales of iPhone 7 Plus were up dramatically compared to iPhone 6s Plus in the June quarter of last year."

Furthermore, while overall iPhone unit growth was just 2% and revenue growth just 3%, Cook said "the combined iPhone 7 and iPhone 7 Plus family was up strong double digits year over year."

Considering the iPhone 7 and 7 Plus are priced similarly to their predecessors, the iPhone 6s and 6s Plus, Cook is probably referring to both units and revenue.

What this suggests is that sales of Apple's lower-end models -- that is, last year's iPhone 6s and 6s Plus and the iPhone SE -- saw unit and revenue performance down year over year relative to how the iPhone 6 and iPhone 6 Plus did when they were the price-reduced products in Apple's product line.

This seems to suggest that those opting for an iPhone are increasingly going for Apple's latest models, rather than trying to save money by buying last year's models for a discount. That, in a nutshell, means Apple delivered enough improvements with the iPhone 7 and 7 Plus phones to make them worth the extra cash compared with the similar-looking iPhone 6s and 6s Plus, respectively.

According to Maestri, Apple saw a channel inventory reduction of 3.3 million units during the quarter. That means that while the company shipped 41 million iPhone units into the distribution channel, iPhone sell-through to end customers was about 44.3 million, reflecting the sum of Apple's iPhone shipment number and the channel inventory figure.

In the year-ago quarter, Apple shipped 40.4 million iPhone models but, according to Maestri, "reduced channel inventory by over 4 million units."

This bodes well for Apple's upcoming iPhone models. Recall that Apple is expected to launch three new iPhone models this year: the iPhone 7s, iPhone 7s Plus, and a premium iPhone with an OLED display, widely referred to as either iPhone 8 or iPhone X.

If customers were willing to pay extra for a larger and sharper screen and a better camera in this product cycle, then I'd imagine they'll be even more willing to pay an even bigger premium for an iPhone that's fundamentally better along many important vectors, such as cameras, display technology, sensing capabilities, and more.

I think Apple's upcoming iPhone cycle will see a substantial step-up in average selling prices, which should ultimately translate into solid revenue growth for the iPhone business.